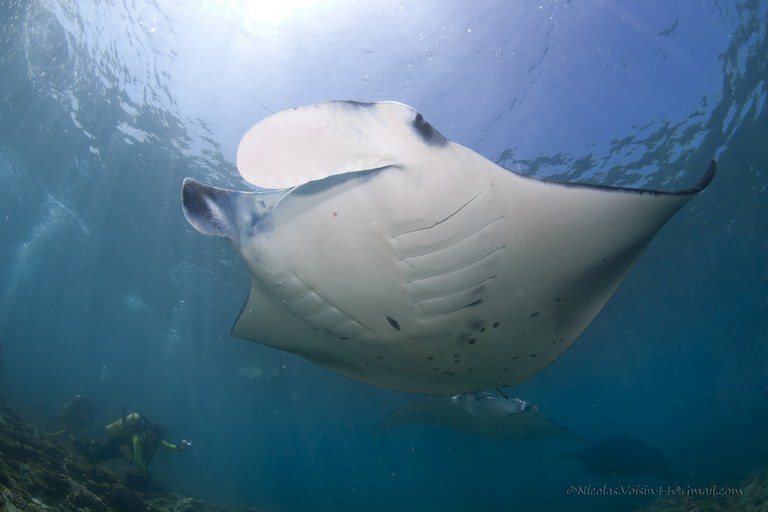 A manta ray swims past a diver in the Maldives. Photo by nicoboxethai / flickr.


Published this week in Biology Letters, scientists Tomita, Toda, and others believe they have discovered how the embryo breathes in their paper “Live-bearing manta ray: how the embryo acquires oxygen without placenta and umbilical cord.”

The researchers were lucky. In 2008, a pregnant manta ray, Manta alfredi, was accidentally caught in a fisherman’s fishing net. The fishermen took the ray to the Okinawa Churaumi Aquarium where it was placed in a 3.7 meter diameter tank.  While there, the scientists there learned she was pregnant.

Sonographic experiment on the pregnant manta ray. K.U. places a transducer of the sonographer above the uterus of the manta ray.

Using a special kind of ultrasound technique, called diagnostic sonography, the scientists imaged the inside of the ray’s womb.  Between analyzing the ultrasound data and examining preserved manta ray embryos, the research team worked out how the baby rays were breathing.  They found the embryo was actively pumping uterine fluid through its mouth through an opening in the back of its head (called a spiracle) by raising and lowering its jaws.  Valves kept the flow of uterine fluid flowing presumably over the embryo’s gills where the baby manta could extract oxygen from the fluid.

According to ray researchers, this is the first time that researchers have shown how ray embryos breathe in the womb.

Watch as manta rays “soar” over coral reefs in the Maldives (from Destination Reefs: Maldives)