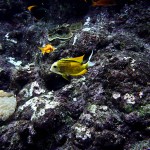 Yawkey, a 475- lb Leatherback Sea Turtle, was released back into the Atlantic Ocean, off the South Carolina Coast Thursday. Leatherbacks are critically endangered species. The turtle was found the week prior, stranded on the beach, and brought to the South Carolina Aquarium Sea Turtle Hospital. Despite its massive size, the gender of this turtle was not able to be determined.  While Leatherbacks are the worlds largest turtles, their reproductive system does not develop until the turtles are fully grown, which can take a long time. Although the precise age for maturity varies and is not known, female leatherbacks have been estimated to become sexually mature at around 35 to 40 years old.

A fully grown leatherback turtle can reach up to 1000 lbs. This rescue marks the first time a leatherback has been successfully rehabilitated in South Carolina. There have only been a couple of successful releases throughout the entire United States. Leatherbacks do not fare well in captivity, so the hospital worked quickly to get Yawkey released back into its natural habitat as soon as possible. The longer an animal remains in captivity, the more obstacles can develop to inhabit its release. This is a great story demonstrating the importance and potential for rehabilitation centers.