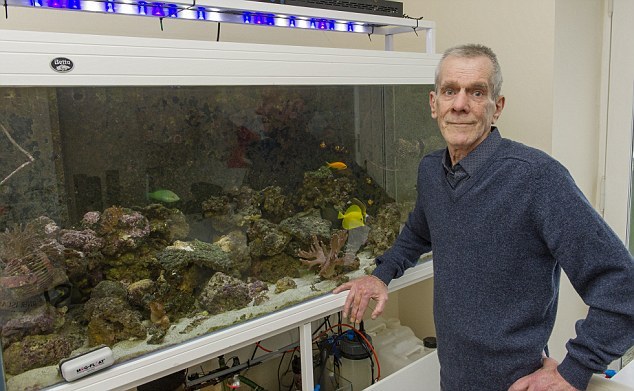 
We really don’t want to be alarmist, but at the same time it is important to remind ourselves from time to time that there are a lot of nasty things that may lurk inside our aquariums.  From biological toxins (e.g. palytoxin) to viruses to bacteria, you have ample reasons to safeguard your health.

Take for example Mr. Cunnison, a UK reefkeeper.  As reported by the Daily Mail, he developed multiple, mysterious symptoms such as shortness of breath, dizziness, and weight loss.   Mr. Cunnison feared cancer, but the doctors ruled that out quickly.  Still, for months, the doctors were unable to diagnose the illness.

After multiple rounds of testing, the doctors finally determined the pathogen: a bacteria called Mycobacterium marinum had entered Mr. Cunnison’s lungs, literally destroying him from the inside.  Mycobacterium marinum is uncommon and usually infects a person’s skin through cuts, but finding an internal infection is extremely rare and shocking.  According to the Daily Mail, this is only the third time a M.marinum infection has been found in a person’s lung.

Mr. Cunninson believes the bacteria entered his lungs when he was doing water changes by using his mouth to start the water siphon.  Although water never entered his mouth according to his account, his doctors believe he inhaled live M.marinum bacteria that then cultivated inside his lungs, manifesting into terrible symptoms months later.

After regiments of antibiotics, Mr. Cunnison is on the mend.  It is fortunate his doctors were able to identify the rare disease.  Too often, we have heard about doctors who were baffled by exotic symptoms originating from aquariums (e.g. palytoxin poisoning).  If you experience strange symptoms, make sure to explain to your physician that you keep aquariums (be specific about the type of aquariums and recent aquarium activities) so they can rule out aquarium-related diseases.

And please practice hygienic fishkeeping.  Wear gloves.  Don’t put your hands and arms in the tank if there are open or recent wounds.  Wear protective eyewear.  Never put your mouth in or around aquarium water.  Even if the chances of contracting an infection or toxin are low, it’s just not worth risking your health.  Martyrdom for fishkeeping isn’t a thing.