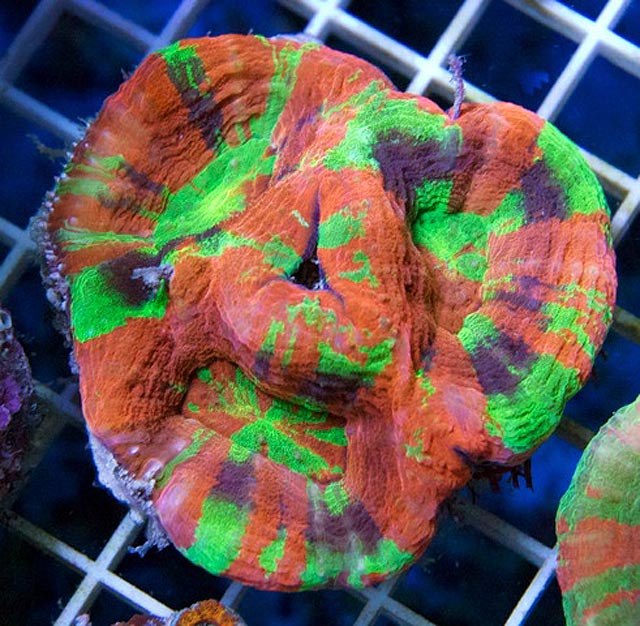 This three-mouthed Scolymia is one of the most incredible specimens I’ve seen … in essence three “Ultra” Scolys fused into a symmetrical rosette.  Bright reds, neon greens, and purple bands … just one of these polyps would turn every coral lover’s head. And to think it almost never made it State-side! The flight was delayed 24 hours due to a typhoon in Hong Kong, which meant this coral had to endure over 72 hours in transit.  It was also initially offered to an overseas customer, but fortunately for ACI Aquaculture (who sold it to coralgasm.com which was then almost immediately sold to a US coral enthusiast), it was turned down due to price.  It’s hard to imagine how anyone can turn this piece down.

This is one bizarre Bleeding Apple.  This Scolymia is actually a double-mouthed coral, but it probably isn’t what you think.  The top is not an oversized mouth nor polyp, but rather the remnants where a coral or rock had broken off during shipping.  The two mouths are located on opposite sides beneath the center protrusion.  The coral had simply grown up and around whatever was in the middle. Chris Meckley says “It’s really interesting to ponder how these solitary animals formed such unusual growth patterns.”  Anyone want to venture their guess?

Finally, here is a “Grade A” (one grade below “Ultra”) triple-headed green and purple Scolymia.  Three distinct polyps are lined side by side, arranged from smallest to largest, like the three lil’ piggies.   It’s not quite as cool as the other two, but any cluster of Scolymia is nothing to sneeze at.