If you thought big bristleworms were scary … 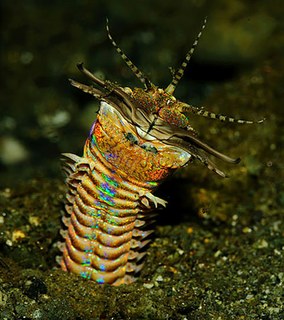 
Bobbit worms (Eunice aphroditois) exist throughout the Indo-Pacific.  They bury their bodies in muddy or sandy substrate with their heads up ready to pounce on passerbys.  They can also emerge at night to hunt.  Bobbit worms are omnivores and are known to feed on just about anything, including fish, crustaceans, cephalopods, and corals.

And these worms eat a lot.

The Assassin in Action

Underwater videographer ‘liquidguru’ patiently filmed two bobbit worms in the mucky seafloor of the Strait of Lembah (Indonesia).  His patience paid off when he recorded not only one bobbit worm successfully snaring a scorpionfish but also the other worm’s failed attempt to capture an octopus (more evidence that octopus are awesome).

The Assassin in Aquaria?

Can you imagine discovering this monster had hitchhiked into your aquarium?  You are unlikely to find a E.aphroditois hitchhiker because these worms inhabit mucky substrates.  However, other monster eucinid worms do find their way into aquariums.  A few unlucky aquarists have experienced the frightening voraciousness of these worms firsthand.  Steve Weast (OregonReef.com) probably holds the dubious distinction of the most famous documented incidence dealing with a monster eunicid worm. There is a long thread (no pun intended) on the Michigan Reefers forum describing reefkeepers personal encounters with these killer worms.

In 2009, a bobbit worm terrorized the reef exhibit at the Newquay’s Blue Reef Aquarium in Cornwall, UK, chowing down corals and fish alike.

From this beautiful aquarium:

They caught this nightmarish beast!

If you discover strange bite marks on your corals and your fish are mysteriously disappearing, you may have a bobbit/eucinid worm in your tank.  These worms are notoriously difficult to catch.  They fit into the tightest of spots, and they are lightning fast (as you see in the video).  In most cases, a full dismantling of the area where the worm resides is required to catch and remove it.  Just be extremely careful if you are tasked with this unenviable assignment.  Bobbit worms not only have killer pincers but are also covered with bristles that can cause paralysis.  It doesn’t help that they look downright horrific!