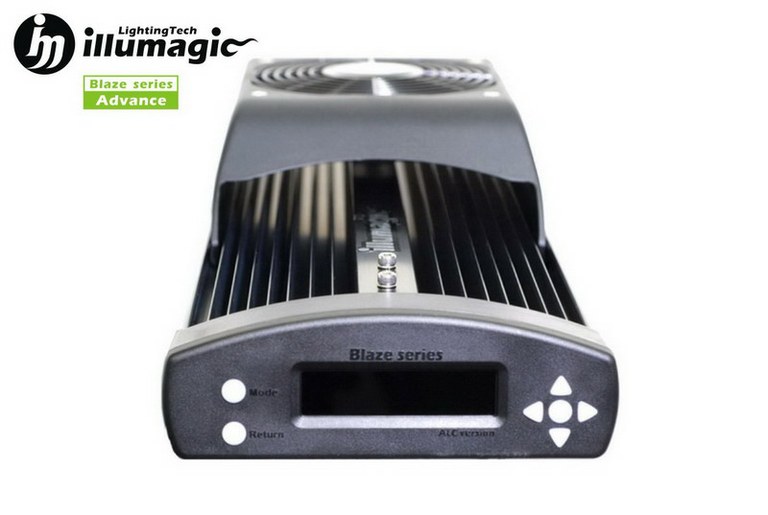 The Illumagic Advance Version retains much of the ALC system and can be considered as the second generation ALC. The main engineering difference is that the LED circuit boards are further integrated into a complete modular system for better controllability and efficient assembly.

Moreover, the new Advance Version fixtures are now equipped with 75 degree silicone optical lens modules to improve light penetration … something the previous ALC system lacked.  The lens is made of thermal and UV stable silicone material in consideration of the lifespan. According to Illumagic, the light intensity has been increased 100% without significant loss to light spread.

The Advance Version can communicate from one unit to another via an I/O port in what Illumagic calls a Master/Slave system.  Master fixtures contain the controller while more affordable slave fixtures do not.  This allows for system expandability without redundant controllers, thus lowering cost while providing scalability.

As for the LEDs themselves …

The Illumagic Advance Version (reef/saltwater “S” model) uses a mix of neutral white, cool white, blue and royal blue 3.5 watt Cree XP series LEDs and 1 watt Polar UV and purple LEDs. The diodes are linked in three distinct, independently-controllable channels.  The two white LEDs are paired in one channel, the two blue LEDs in another, and the  UV and purple LEDs form the the final grouping.

All fixtures have built-in “thermo-sensitive” top-mounted cooling fans. The rotational speed of the fan is automatically controlled by a temperature sensor.

The Fixture measures 6 inches wide and is available in the following lengths: 18”, 24”, 36”, 48”.  All fixtures come with a hanging kit and mounting legs.