A Most Illustrious Worm: Ikeda taenioides 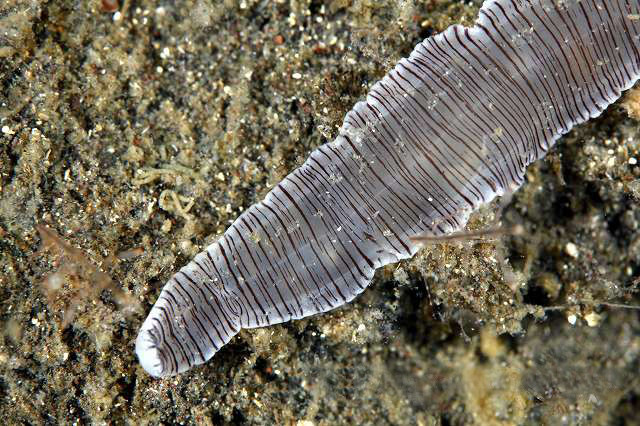 I’d like to draw your attention today to a remarkable worm, Ikeda taenioides, whose immense size and bizarre morphology make it unlike anything you are likely to have seen before—a veritable living tape measure of a creature, stuck on its own lonely, idiosyncratic branch of the tree of life. Despite having been discovered over a century ago, despite occurring in an easily collectable habitat, despite having considerable appeal for the home aquarist, this remains an exceedingly obscure invertebrate yet to find its way into the aquarium industry.

Ikeda is, at first glance, a remarkably difficult organism to classify without a little zoological guidance. It’s flattened and attenuated body gives it the same look we expect from a ribbon worm (Phylum Nemertea), but, despite often being misidentified as such by divers, it does not belong to this group. It certainly looks a bit like a flatworm (Phylum Platyhelminthes) writ large, but, again, this is incorrect as well.

It’s true allegiance is to a small and unfamiliar lineage known by the unusual appellation of “spoon worms”. The 200+ described taxa comprising this clade were long treated as a unique phylum of animals (Echiura), but, despite lacking any obvious segmentation as adults, they are now classified as a degenerate member of the segmented worm phylum (Annelida). Within this diverse phylum (which includes such familiar aquarium vagrants as bristleworms, spaghetti worms, feather duster worms and so on…), the echiurans appear to be a close relation to earthworms and leeches. 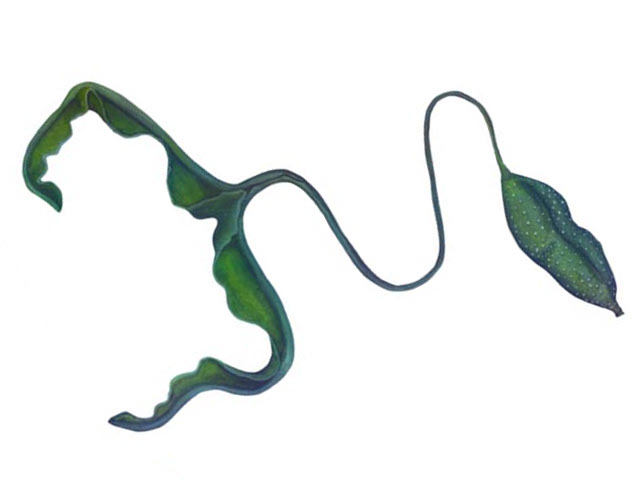 Illustration of Bonellia viridis, a common hitchhiker into reef aquaria. Note the bifurcated proboscus and unsegmented lump of a body, typically hidden deeply within live rock. Credit: A. Lingford

Amongst the echiurans, Ikeda is the largest and, arguably, the most beautiful representative—a spoon worm without equal. It is the only member of its genus and family, with Bonellia viridis (a species commonly encountered as an aquarium hitchhiker) being its closest relative. The videos in this article highlight the unusual morphology of Ikeda, in the form of its nearly five foot long, zebra-striped retractable feeding proboscis. The rest of the animal, which consists of a foot-long unsegmented blob (scientifically speaking), is hidden deeply within the hole from which it springs forth, buried up to a meter beneath the surface. Needless to say, extricating Ikeda from its home is no small task, even for the most devoted of zoological researcher. To the best of my knowledge, there is not a single photograph of what this worm’s full body looks like in the light of day.

Befitting such a reclusive little beastie, almost nothing is written about it in the scientific literature. We know that it occurs throughout much of the tropical and subtropical Indo-Pacific, though records are generally quite sporadic for such a large organism. It’s original discovery dates to the early 1900’s, from the shallow intertidal mud flats of Sagami Bay, Japan. It’s discoverer (a researcher with the surname Ikeda) originally placed it within another echiuran group. Subsequent study would reveal some important differences in its musculature, necessitating placement in its own monotypic genus, which is how it found itself in the unusual nomenclatural position of being named after its own author.

Specimens are generally restricted to shallow intertidal and subtidal mud flats, to a depth of at least 10m. In the coastal regions near Abu Dhabi, they have been observed to feed for a relatively brief period after the tides have receded, fully exposed to the scorching equatorial sun of the Arabian Peninsula. Here, where the water can reach near 60℃ in the stagnant tidepools, Ikeda goes about its day with a nonchalant verve, grasping out with its mucus-covered proboscis for whatever organic morsels the tide has brought to it. This feeding organ is said to be extended solely by mucociliary action (much the same way a flatworm so effortlessly glides about), but there is clearly a powerful musculature enabling retrieval, as it takes only seconds for the fully extended creature to withdraw back to its burrow.

Feeding is accomplished by the formation of a thin cylinder of sand along the dorsal side of the proboscis, drawn slowly and ineluctably towards the mouth. Like any good annelid worm, its anus is posteriorly situated, which creates a bit of a problem when it comes to keeping its burrow free of faeces. Intertidal specimens have been observed to create small mounds surrounding their burrow openings, suggesting that their waste is simply pushed back out with some peristaltic motions of the body. Some 20 cubic centimeters of material is processed in this manner during each feeding cycle, making Ikeda an important contributor to tidal ecosystems—an obscure invertebrate with a vital role to play in the cycling of nutrients on this planet.

So why devote all this prose to Ikeda? Aside from being inherently awesome and worthy of some David Attenborough narration, this elegant worm would make for a phenomenal addition to an aquarium clean-up crew… with some important caveats. The ideal setup would involve a biotope display of species which specialize in silty habitats. Harmless fishes like the Kojiro Goby, Acanthocepola bandfishes, Oxymetopon ribbongobies and so on. The industrious efforts of Ikeda would likely be the only clean-up crew needed for all but the largest of aquaria. Another interesting idea might revolve around creating a mangrove forest, replete with archerfish, cardinalfishes and other associated species.

Given the considerable size this worm can reach, it would only be appropriate for larger systems with minimal mechanical filtration and a heavy fish load. The idea is to maximize the settling of organic matter onto the surface of the substrate (fine sand, being a sensible choice here). With enough plant productions (think mangroves and seagrasses), a self-contained ecosystem might be possible, with water changes being of little importance for reducing waste build-up. But, alas, unless you happen to live close enough to an Indo-Pacific intertidal mud flat to collect your own Ikeda (and, even then, it’s going to be a chore retrieving one from its burrow), you’re going to find it all but impossible to recreate this little slice of the ocean in captivity.

Public aquaria are probably best suited for helping bring my Ikeda biotope to life, though even these institutions tend to balk at displaying such a subtle creature from a relatively “ugly” habitat. While jellies and whale sharks have become de rigeur, truly unique and innovative exhibits are few and far between. And so, poor Ikeda is likely destined to live its life buried in sand and obscurity, far from the adoring gaze of nerds like me.