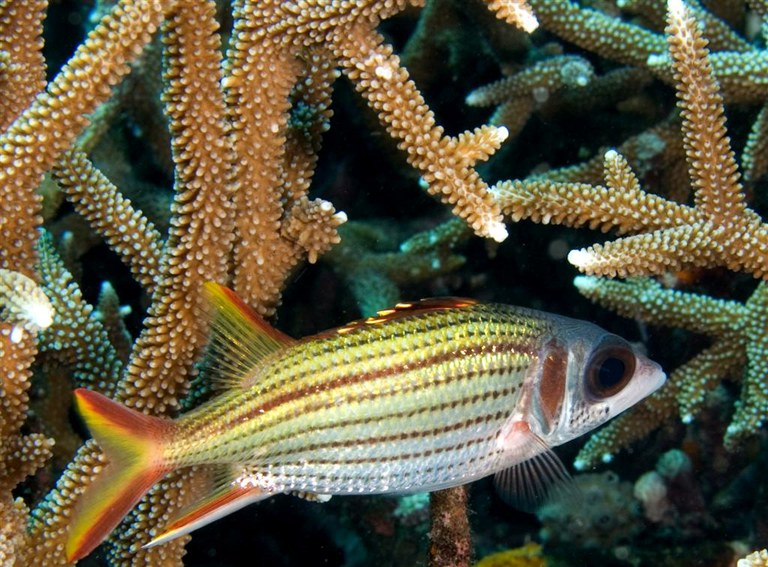 
Reefbuilders reported yesterday that the research paper “Effects of phosphate on growth and skeletal density in the scleractinian coral Acropora muricata: A controlled experimental approach” by Dunn, Sammarco, and LaFleur Jr was just published in the January 2012 issue of the Journal of Experimental Marine Biology and Ecology.

In this study, researchers wanted to understand what would happen to a fast growing scleractinian coral under varying phosphate levels. For their study, they chose the fast growing acroporid, Acropora muricata, varied phosphate levels (0.05, 0.20, and 0.50 mg/L), and measured:

The interesting thing about this study was that the researches expected the growth rates to decrease as phosphate levels increased. As it turns out, for Acropora muricata this hypothesis proved to be false.

The researchers believe that the increased growth was due to a larger overall density of zooxanthellae in the 0.5 mg/L group.

Notes on the experimental setup

I always like reading the details about the experiment, so here they are:

Live Aquaria was the source of the five wild heads of A.muricata used in this study.

When received, each of the five heads were fragged, mounted to PVC using epoxy, and then randomly secured to three submersible PVC structures which were then placed into the study tanks. (right)

Three 30-gallon aquariums were used for the study:

Below is the configuration of the tanks in the study:

Phosphate levels were measured thrice weekly in addition to ammonia, nitrite, pH, salinity, and temperature. Calcium and nitrate were measured weekly. Throughout the study, ammonia was undetectable (0.00 mg/L) and nitrite and nitrate were negligible (0.03-0.09 mg/L and 0.11-0.13 mg/L respectively). Temperature stayed at ~25 C, salinity at ~34-35 ppt, pH at ~8.25, and calcium at ~365 ppm.

Keep in mind that this finding has only been documented for Acropora muricata. While this may or may not prove true for other scleractinian corals, more research needs to be done in this area before any definitive conclusions can be drawn.

Don’t run out and purchase inorganic phosphate to start dosing your tanks.  😉