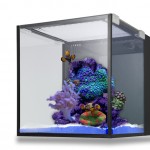 Innovative Marine is living up to their namesake this week with the announcement of the most well-equipped all-in-one nano aquariums on the market. They are bolstering their Nuvo Fusion lineup, going a little smaller to target those hobbyists who enjoy a beautiful yet insanely functional desktop sized aquarium. The new models will include the Fusion Nano 10 and 20, and despite their size, they will enjoy all of the same features of their larger brethren. That means a 10 and 20 gallon tank with low iron glass (an industry first as far as we know), mesh screen top to keep fish in, built-in overflows, a rubber leveling mat, and some impressive rear chamber filtration. And you know what the real shocker is…the tanks start at just $99. But the fun doesn’t stop there. As IM has done in the past with other aquariums, the lineup has been given access to some really awesome third-party upgrades. MORE: Innovative Marine Adds Two Smaller Tanks to the Fusion Lineup