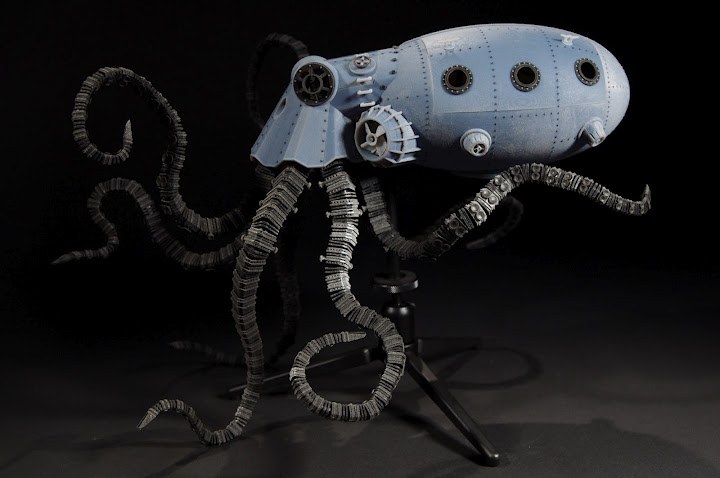 The OctoPod Underwater Salvage Vehicle or O.P.U.S. V for short.


I caught up with Sean on the Makerbot Operators Google Group and asked him about this amazing print called the OctoPod Underwater Salvage Vehicle or O.P.U.S. V for short:

I was working on a grad degree in 3D modeling and animation when I took a one-off class on rapid prototyping. It combined my love of digital design and hands-on mechanical design and I was hooked. I’m a toy collector and wanted to build something that I would want to buy with lots of working features and at the time I was thinking of doing a lighting assignment with an underwater scene. That led me to looking at a lot of underwater creatures and it hit me that an octopus vehicle would be great with articulated arms and would be visually striking. I took a lot of inspiration from the Nautilus in Disney’s “20,000 Leagues Under the Sea”, I wasn’t necessarily going for Steampunk but wanted a real nuts-and-bolts feel. I designed and built the model over the course of two semesters while working full-time so it ate up any free time I had. In the end it was worth it.

He documents the entire design and build process on his blog at http://opus5.complex88.com/. The model was printed on an Objet Connex500™ Multi-Material 3D Printing System which has the ability to print with 107 different materials and his final model shows it. It’s a 3D printer’s dream!

The level of detail on this model is amazing!  All eight of the arms are completely articulated and the suckers reportedly are cupped enough that they will actually stick. The body comes apart and is completely decked out on the inside with all sorts of things one might find inside an underwater vehicle. Tiny lights mark a doorway. A fully operational hoist raises and lowers a hook through an iris doorway. Tiny chains hold up a shelf. The cockpit in the octopuses head is plastered with buttons, captain’s chair, and lit sonar displays. Tiny port holes line each side of the cabin. The deck is ribbed.

Sean made a video highlighting these and other features of the O.P.U.S. V in a 4 minute video:

Here are some additional photos showing the incredible attention to detail:

Front shot of the head and tentacles.

A side shot of the head showing the view ports from the control center and propellors that help steer the vehicle.

A side view with the outer panels removed exposing the interior layout.

A close-up of the insides of the working area showing the hoist and iris door.

Another close-up of the insides.

One of the propellers on the front of the vehicle.

A close-up of the underside of the vehicle showing the articulated suction cup arms.

There was a huge amount of clean-up involved before the assembly of the model:

Finally the assembly could happen:

If you would like to see even more of this build, head over to Sean’s blog and check it out.