Interdependency on reefs start from a coral’s birth 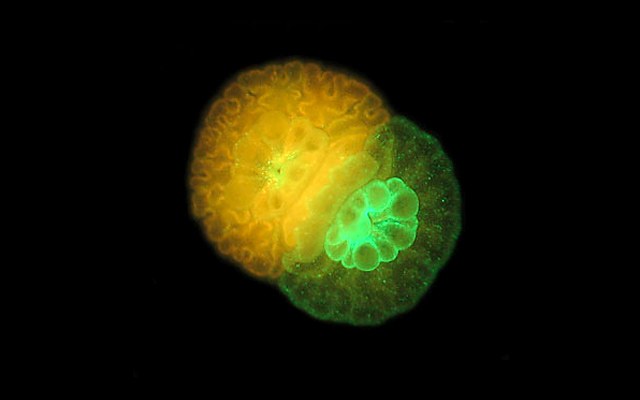 A pair of Acropora millepora polyps three days after settling. This process would not occur if not for bacteria.


Life on the reef is an amazingly complicated thousand-piece orchestra. Countless organisms big and tiny each do their small part to keep the whole living mega-machine churning.  At its most fundamental, coral reefs would not exist without fast-growing reef-building stony corals (e.g. Acropora spp.).  In turn, these corals could not exist without their intimate relationships with microscopic algae and bacteria.

This interdependency starts at the very beginning of a coral’s life.

A new research published in the Proceedings of the Royal Society B identified bacterial biofilm responsible for eliciting baby Caribbean corals (coral larvae) to settle and attach – ie. the start of a new coral colony.  Pseudoalteromonas sp. PS5 emits a chemical that convinces free-living coral larvae to transform into attached coral colonies.  Conversely, when scientists killed the bacteria using antibiotics, the brooded larvae of Porites, Orbicella (formerly Montastraea), and Acropora failed to metamorphosize and attach to substrates.

Pseudoalteromonas sp. produces a compound called tetrabromopyrrole (TBP).  In 2011, scientists studying Pacific Acropora millepora larvae isolated this compound growing on coralline algae and identified it as the chemical signal responsible for the induction of larval metamorphosis and settlement.  Three years later, researchers of Caribbean coral confirm past research done with Pacific coral.  Basically, corals everywhere would not exist without either algae or bacteria.