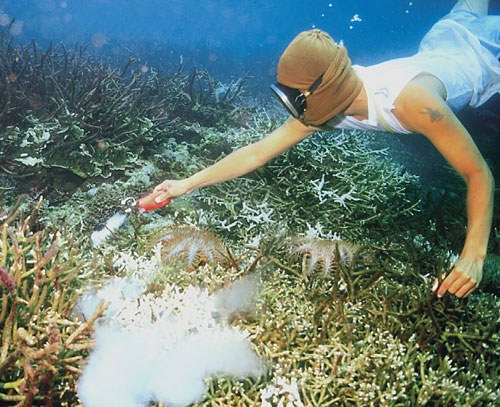 
Last week, Advanced Aquarist broke news about a new, fast, non-lethal method for cyanide detection in marine fish.  We wanted to learn more about the groundbreaking research published in the PLoS ONE article, so we turned to Dr. Peter Rubec.

Advanced Aquarist: Dr. Rubec, we appreciate your time to discuss the exciting new cyanide test for marine fish. To start, please tell us about yourself.

Dr. Peter Rubec: I am an aquarium hobbyist and have kept fish continuously since 1957. I attended the University of Ottawa (Hons. B.Sc, M.Sc) and Texas A&M University (Ph.D). I have worked for about 30 years as a fisheries research scientist (Canadian Department of Fisheries and Oceans, Texas Parks and Wildlife, and Florida Fish and Wildlife Conservation Commission), am a conservationist (helped found the International Marinelife Alliance-IMA in 1985), teach aquaponics at Morning Star Fishermen, and I am considered an expert on the issue of cyanide fishing and cyanide testing (have published over 20 papers in scientific publications and aquarium magazines related to cyanide and the aquarium trade).  I participated in all five of the Marine Ornamentals Conferences, and participated in a Cyanide Detection Testing  (CDT) Workshop sponsored by NOAA held in Orlando Florida in 2009.

Advanced Aquarist: Tell us the history of this project and why this research was undertaken.

Dr. Peter Rubec: The NOAA CDT workshop reviewed various cyanide testing procedures that have or could be applied to monitor the presence of cyanide in marine aquarium fish (MAF) and live reef fish (LRF).  The IMA conducted cyanide testing in 6 laboratories from 1993 to 2001 under contract from the Philippines Bureau of Fisheries and Aquatic Resources (BFAR). I published results of the IMA testing in a book chapter in 2003.

However, some of the participants at the workshop criticized the IMA test based on the fact that half lives of cyanide and its byproducts in marine fish have not been determined. The IMA noted that they had tested over 48,000 fish and invertebrate specimens using daily calibrations. Having visited 3 of the 6 IMA laboratories on several occasions, I knew the laboratories had been run in a very professional manner by the IMA chemists. I defended IMA’s test against its main critic (Dr. Robert Kobelsky).

The NOAA CDT workshop (report published in 2009) served to emphasize the need for one or more tests for cyanide and/or its metabolites. The IMA Ion Selective Electrode (ISE) test was conducted in the exporting country (Philippines) but might not be appropriate in importing countries. There is a need for a faster non-invasive test that can be applied throughout the chain of custody from collectors through to retailers.

Dr. Ricardo Calado (University of Aveiro, Aveiro, Portugal) emailed me about two years ago concerning his desire to develop a non-invasive test for cyanide to help regulate the LRF and MAF trades. We decided to collaborate.  Based on what I knew, we decided that a test for thiocyanate present in fish urine was the most appropriate test. A recently developed electrode and test for thiocyanate was available (developed by scientists at his university). We decided to test marine aquarium fish (clownfish) that had been bred in captivity to ensure they were cyanide free. Dr. Calado raised the research funds, put together a team of scientific analysts (some of whom had worked on the test previously), and pushed the project through to completion.

Advanced Aquarist: What role did you play in the research presented in this paper?

Dr. Peter Rubec: I advised on the experimental protocols, and helped revise the manuscript for publication. Because most of the authors were Portugese and English was not their first language; this turned out to be more work than I originally anticipated.

Advanced Aquarist: Who would benefit most from having one of these instruments?

Dr. Peter Rubec: The new test for thiocyanate (SCN) can be applied either in the exporting countries, in importing countries, or at both ends of the chain. When the IMA did cyanide testing for BFAR, the results were not fully utilized to prosecute offenders using cyanide to capture MAF and LRF, or those involved with buying and selling them (also illegal).

While the exporting countries would benefit the most by protecting coral reef habitats that support fisheries to sustain local communities, there appears to be a reluctance to enforce laws against the use of cyanide in the Philippines and Indonesia. This may be related to the lack of funding to conduct monitoring and testing. Political interference and corruption may also be involved.

Consequently, I hope to see the new SCN test applied in importing countries. In the U.S.A., the test could be used to help support the Lacey Act. It would allow the USFWS to prosecute importers who knowingly import cyanide-caught fish.

Advanced Aquarist: How do you envision implementing this new protocol both domestically and at exporting countries?

Dr. Peter Rubec: It would help if the exporting countries mandated that all fish exported must be “accredited” as being either cyanide-free or thiocyanate-free based on testing done in the exporting country. The exporting countries issue export-permits and provide paperwork that accompany shipments of MAF and LRF to importing countries. They could mandate that fish would not receive export permits without having been accredited based on testing done on samples collected from the export facilities. The testing should be either by government run or government-sponsored laboratories. Fees could be charged to the exporters to make the laboratories self-sustaining. Export facilities that fail the test more than three times would lose their operating licenses.

The USFWS or government-approved laboratories could implement random testing of marine fish being imported into the U.S.A. Only fish with an “accreditation” certificate would be imported. If the fish test positive for SCN, fish importers would receive several warnings. This would help to put pressure back on the exporters. If fish being imported continue to be positive for SCN, the importer could be prosecuted under the Lacey Act for knowingly importing fish contaminated with thiocyanate (a strong indicator that the fish were caught with cyanide). Other importing countries in Europe, Japan, and elsewhere could implement similar regulations.

Advanced Aquarist: This paper presents data on Amphiprion clarkii. Does your group plan to expand the protocol to include additional fish?  If so, are there any species in particular that you plan to test in the next series?

Dr. Peter Rubec: The analytical staff at the University of Aveiro are interested in conducting more research to further evaluate the test using a more sensitive SCN probe (sensor) that is under development.  It will depend on their obtaining additional funding. The test procedure has been demonstrated to work and is already very sensitive (down to 3 ppb).

I do not see the need for the university to become involved with expanding the protocol to    include additional species of fish. If more species are to be tested in exporting and/or importing countries, other groups (either government agencies or possibly non-government organizations) will need to be involved.

Advanced Aquarist: How far along are the optical fiber apparatus and software?  Can authorities and other testing personnel expect to see working equipment soon?

Dr. Peter Rubec: The optical fiber sensor was developed by the staff at the University of Aveiro. The main problem is that the sensor is not yet being commercially manufactured and sold. However, the university is willing to manufacture enough probes and software to provide other groups with the equipment. The research already published indicated that there was SCN pollution off of Portugal that appeared to be related to coastal pollution (not natural sources). So, I expect that the probe will be commercialized to support coastal monitoring of pollution (not just to support testing of fish being traded).

Advanced Aquarist: Did you have any involvement in developing the SCN- method?

Dr. Peter Rubec: My involvement was mostly as an advisor. I was not involved with developing the SCN method. The test was developed by Dr. Lurdes Silva and her research associates.

Advanced Aquarist: Why was the study interrupted at 28 days post cyanide exposure? The paper inferred that something happened to cause the study to be prematurely discontinued.

Dr. Peter Rubec: I don’t know why the study was terminated after 28 days; while they were still detecting relatively high concentrations of SCN. I don’t believe that anything happened to cause the study to be prematurely discontinued. I will ask Dr. Colado and provide an answer later.

Advanced Aquarist: A number of macroalgaes contain thiocyanate (up to 1 ppm in some cases — reference: http://144.206.159.178/ft/38/588701/12057013.pdf).  Do you foresee a problem with your test apparatus exhibiting a false positive with herbivorous fish that have eaten these macroalgaes recently?

Dr. Peter Rubec: I am not aware of any research that indicates that SCN is taken up through the stomach or through the intestine of fish. The research papers cited done by Dr. George Dixon, Dr. Roman Lanno, and by Dr. Pierre Raymond involved the uptake of SCN across the gills of rainbow trout. So, I don’t believe that the SCN test apparatus would give false positives with herbivorous fish that might have eaten macroalgae containing SCN. It sounds like another research project.

Advanced Aquarist: What are the plans for this project moving forward?

Dr. Peter Rubec: There is an interest by Dr. Calado and his associates in doing more research with the SCN probe provided they can obtain funding. I hope that government agencies will take an interest and establish testing facilities.

The cyanide issue has waned in conjunction with rising concern about climate change and ocean acidification. But, this is not because cyanide fishing is no longer a problem. The IMA was the only group that found funding, initiated monitoring and testing, and dealt effectively with cyanide fishing. The issue was mismanaged by the Marine Aquarium Council (MAC). They obtained over $10 million in grants and promised to do net trainings, underwater surveys, cyanide testing etc. They have nothing to show for their efforts. No other group is presently doing anything substantial to stop cyanide fishing, that along with other forms of destructive fishing, are destroying coral reefs. Cyanide has immediate detrimental effects on coral reefs and contributes to high mortalities of fishes being exported. Climate change and ocean acidification are real but are more long term with respect to their impacts on coral reefs.

The present SCN paper vindicates the ISE test used by the IMA. It worked and the results obtained are still available in a database. It is not clear how the new SCN test will be applied at this point in time. Science is not the issue. The issue is whether there is political will to provide funding to deal with the problems associated with cyanide fishing.

Advanced Aquarist: Dr. Rubec, thank you very much for taking time to discuss this topic with us!