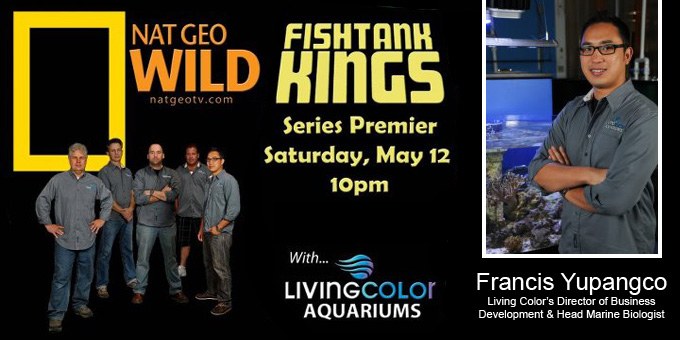 Advanced Aquarist: Thank you for taking the time to talk with us about Fish Tank Kings.  There is clearly a lot of interest in the upcoming Nat Geo TV show.   The obvious place for us to start: Who is Living Color Aquariums?

Francis Yupangco: We are a group of individuals with varying specialized skills ranging  from engineering, manufacturing, art and biology backgrounds. We all work together to create some amazing aquarium exhibits.

Advanced Aquarist: And what is your role at LCA?

Francis Yupangco: I am Living Color’s Director of Business Development and Head Marine Biologist.  My primary  job is to liaise with the many public aquariums and institutions we work with.  I help our clients turn their complex exhibit visions into reality.    As  head marine biologist I make sure that the aquariums are built with animal care as the primary goal.

Advanced Aquarist: In three or fewer sentences, describe what Fish Tank Kings is all about.

Francis Yupangco: Fish Tank Kings is a series that shows audiences both the art and science behind creating some of the world’s coolest aquariums.  Our audience will be treated to some very special behind the scenes tours at amazing public aquariums and aquaculture facilities.  They will also get to meet some interesting characters who are very passionate about the aquatic world.

Advanced Aquarist: Can you give us a brief history about the development of the Fishtank Kings?

Francis Yupangco: Fish Tank Kings was created by Sharp Entertainment, a well known New York based production company. We began talks with them over a year ago. They sent a small crew to Living Color and we shot a 4 minute “sizzler” reel a  month later.  The sizzler reel was then shopped to several networks.  National Geographic International loved the show’s concept so much that they went ahead and ordered  6  1-hour episodes.

Advanced Aquarist: How much creative input does LCA have for the show’s content?

Francis Yupangco: All of the aquariums featured on the show were projects that we had already committed to even before the show was finalized.

Advanced Aquarist: Can viewers expect a general structure to each episode?

Francis Yupangco: The entire  premiere episode is dedicated to the Miami Marlins Aquariums because of the complex nature of the project.  Every other episode  has 2 stories which consist of 2 different aquarium builds. There are also a couple of very cool field trips to some amazing places on the series.

Advanced Aquarist: TV shows are marketed towards a general audience by necessity, but will Fishtank Kings delve into more advanced husbandry topics in any of this season’s episodes?

Francis Yupangco: FTK is marketed to anyone who has an interest in the aquatic world and animals in general.  Advanced husbandry topics are covered in several episodes including shark transport, coral keeping, deep water fish collection and acclimation, cephlapod husbandry and general quarantine.

Advanced Aquarist: Speaking of advanced topics … LCA is known for replica corals, but reefkeepers want to know: Will we see any live coral reef builds in this or (knock on wood) future seasons?

Francis Yupangco: Yes, we build a 600 gallon “hybrid” live coral system with corals and fish from ORA. Viewers also get an exclusive tour of ORA from Dustin Dorton, ORA’s president.

Advanced Aquarist: I know LCA is a regular reader and contributor to Advanced Aquarist, so you are likely aware that aquarists are some of the toughest critics of TV programming about our hobby.  Many aquarists have expressed concerns about the welfare of livestock, educational quality, and the portrayal of our industry.  What of these concerns, if any, will Fish Tank Kings take into consideration?

Francis Yupangco: The National Geographic Channel  has a long history of high quality educational programming.  The transcripts and video from every episode were scrutinized by National Geographic’s Standards and Practices  team.  The team includes  a PhD. who reviews all the transcripts and footage to ensure that everything stated on the show was scientific fact and that all the animals were handled with proper care.

Advanced Aquarist: I would be remiss if I didn’t ask: What differentiates Fish Tank Kings from Animal Planet’s Tanked?

Francis Yupangco: Well you will have to watch our show to find out! I will say, that our show was fortunate to have the cooperation of several well known public aquariums, aquaculture facilities and biologists who support the great work our company has been doing for nearly 25 years.

Advanced Aquarist: What do you hope viewers will ultimately come away with?

Francis Yupangco: I hope that viewers come away with a greater understanding and deeper appreciation for our aquatic world.

Advanced Aquarist: Thank you so much for your time.  We look forward to the May 12 premiere!