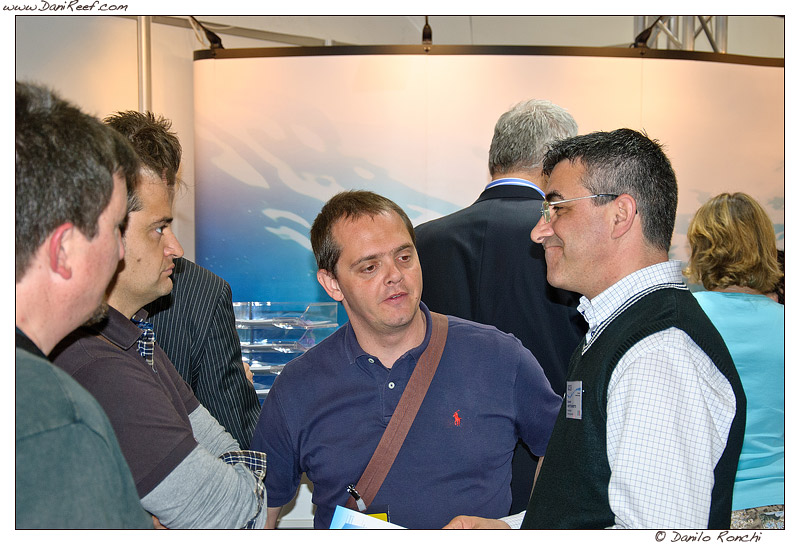 We continue our Interzoo tour with a visit to the beautiful Tunze booth where we upheld by Gianni, head of Tunze Italy.

Gianni has immediately shown us the many innovations introduced by Tunze and as usual, I began to take pictures 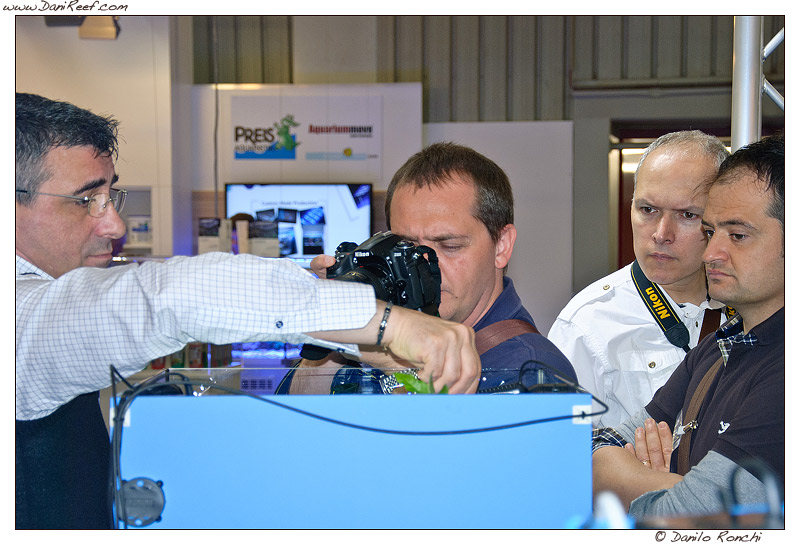 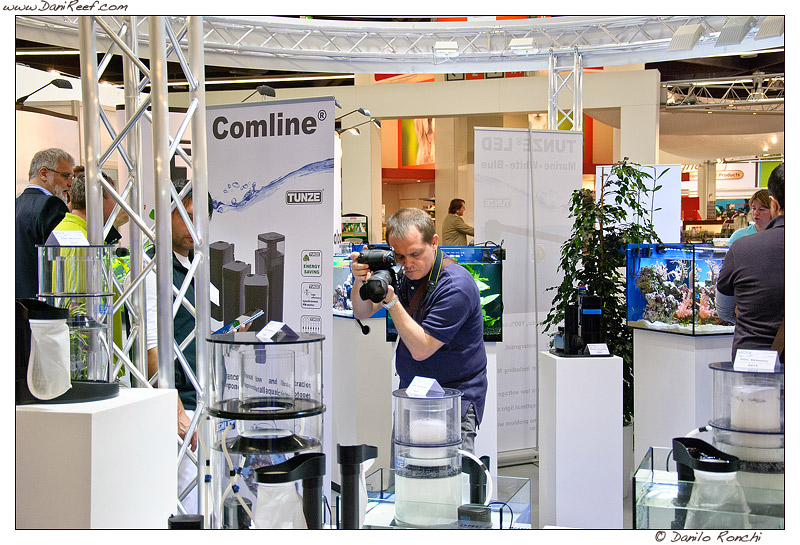 The first innovation was the new Tunze LED, waterproof, efficient, multi-purpose and compact. But let’s see in detail 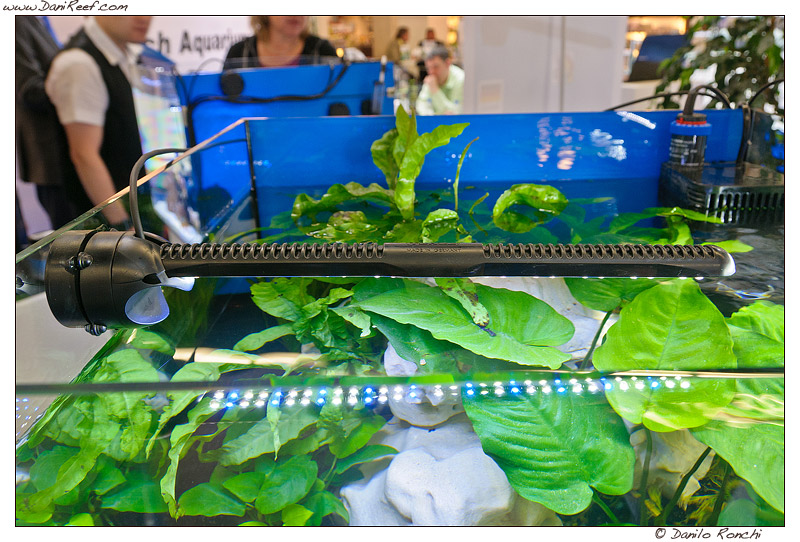 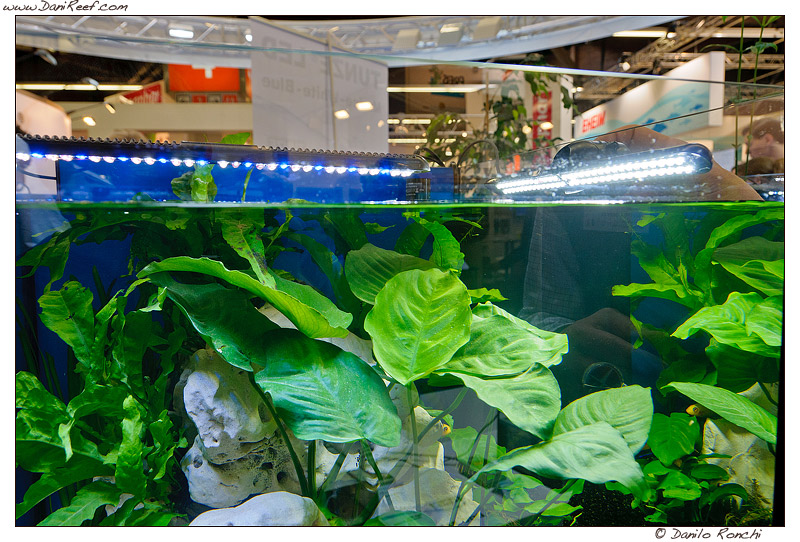 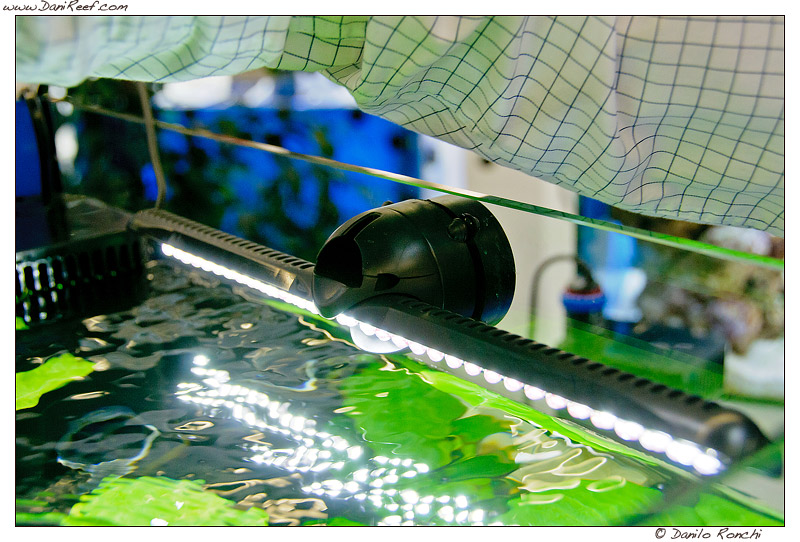 The beauty of the lamp is the fact that you can literally stick to the glass pane with the usual tunze magnetic clips, guaranteed for glasses up to 12 cm for the marine and white version and 15 cm for the blue version. 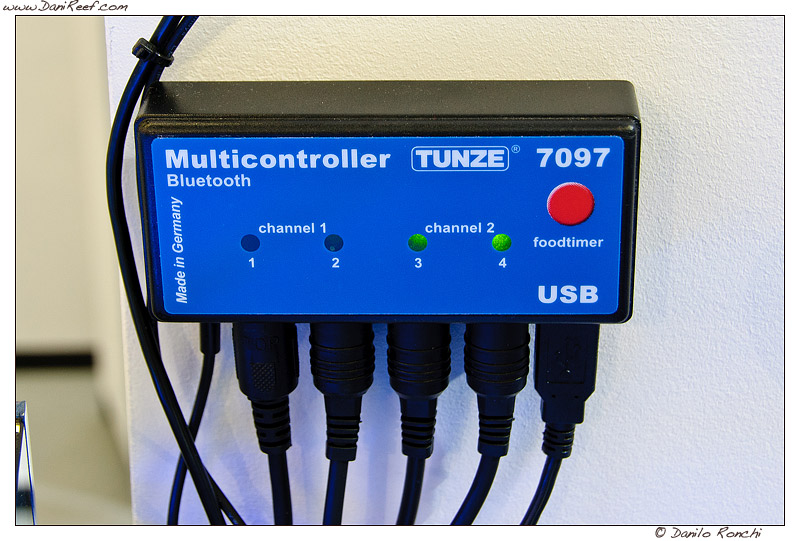 The color of light, the power and dimming can be modified via the new multicontroller 7097 that, in addition to managing the pumps in a identical manner to older 7096, is also able to manage the lighting via the supplied program 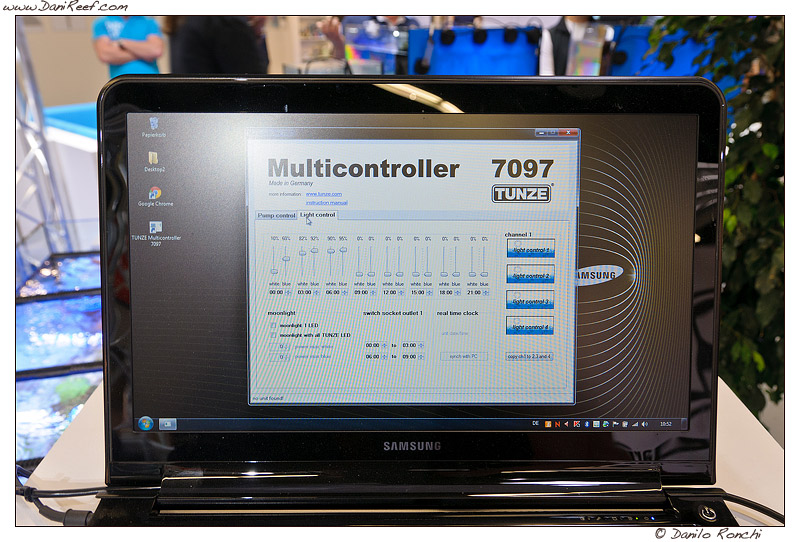 As you can see in the picture you can manage LED lamps by selecting power and dimming for each channel. 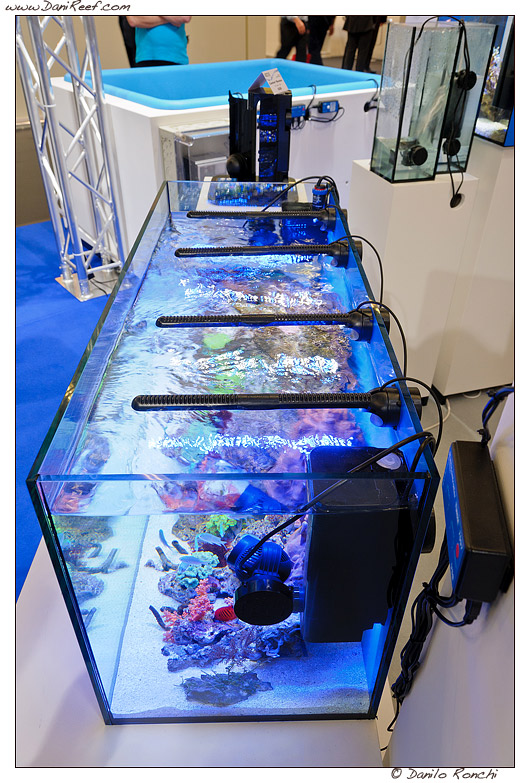 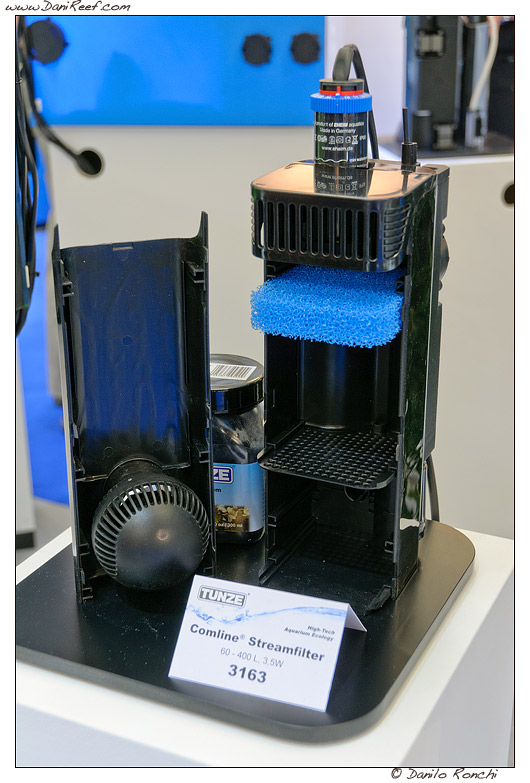 The tunze then presented a series of very compact filters that impressed us by their engineering. The new StreamFilter. Inside a small plastic little box, 110x90x255 (h) cm, was been added all the need to filter water and one pump of movement which, also to work for the filter, contributes to movement in a virtually perfect way, assuming that its output is commensurate with the need of aquarium. Inside you can also insert an heater and an osmocontroller, like the small new one just presented. The hanging is guaranteed by the ubiquitous magnet holder useful for glass up to 12 cm and water aspiration can be done either from below or above. The pump of movement is the 3163.200 with consumption of only 3.5 watts. 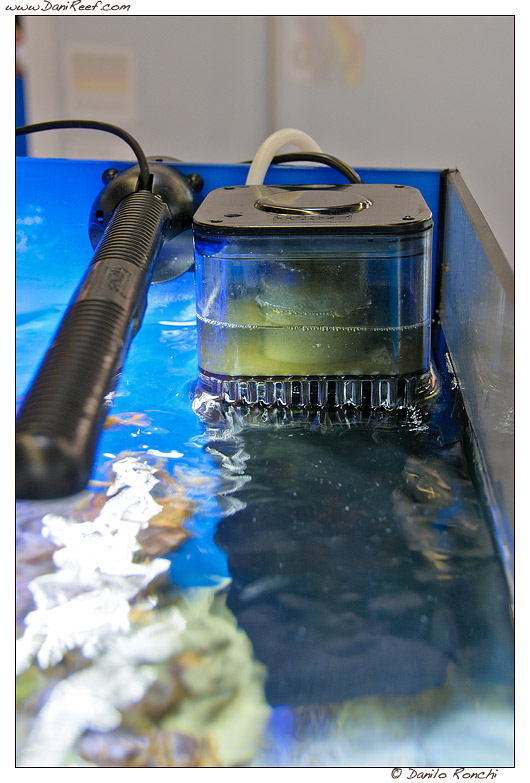 With the same ingenious system and then with the same basic features, with a footprint of 110x90x305(h) cm the tunze has also presented a very interesting skimmer, the DOC skimmer 9004, suited for tanks from 60 to 250 liters, it is a small internal hanging skimmer that promises not to release bubbles in the aquarium with the grating present under the pump, and the ridiculously low consumption of only 4 watts with an intake of 150 l/h. It has also a patented system called anti overfoaming designed to provide active regulation of the skimmer according to the water and the organic load and ensure it can’t overflow. 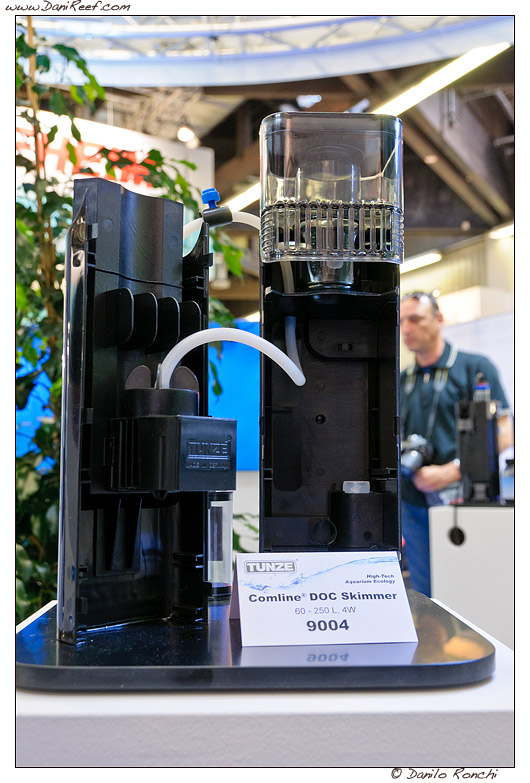 Here is the section of the same skimmer. Really a nice project. 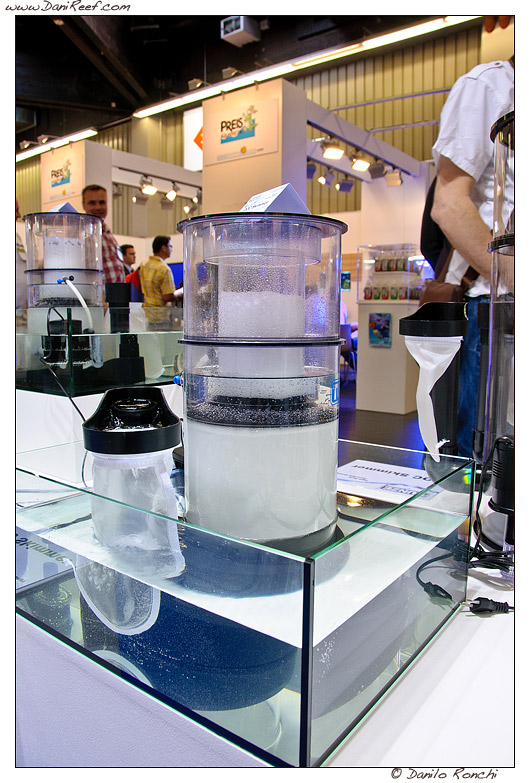 They have then presented the new series of Doc Skimmers 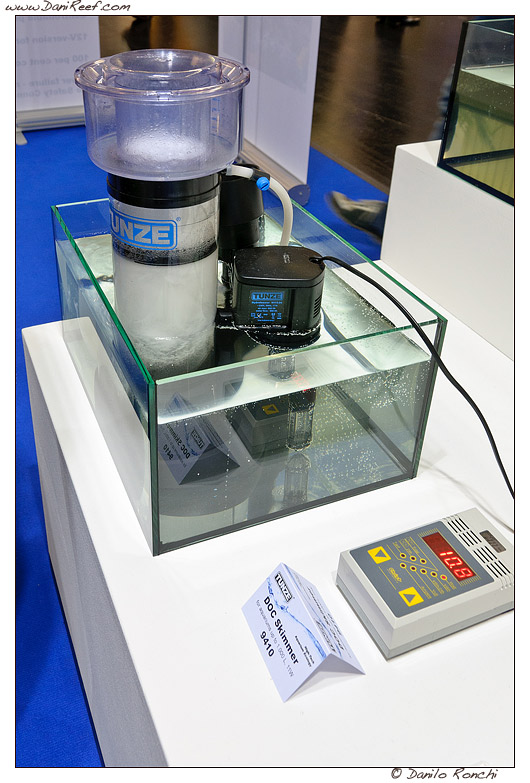 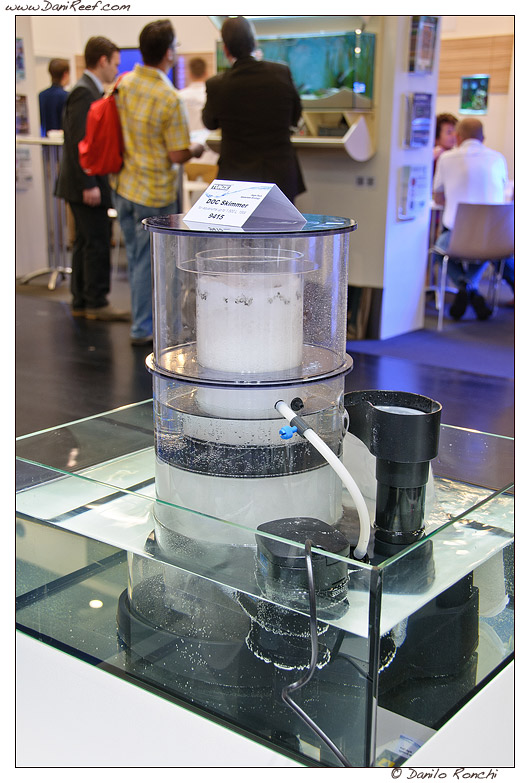 Above we see in operation the skimmer monopump 9415, dedicated to marine aquariums up to 1,500 liters, perhaps for fish only aquariums, aquariums with corals in my opinion have to have much lesser liters, with a size of 35x30x44 (h) cm with a pump of only 15 watt, a declared aspiration of 850 liters/hour of air and 1,100 liters/hour of water. 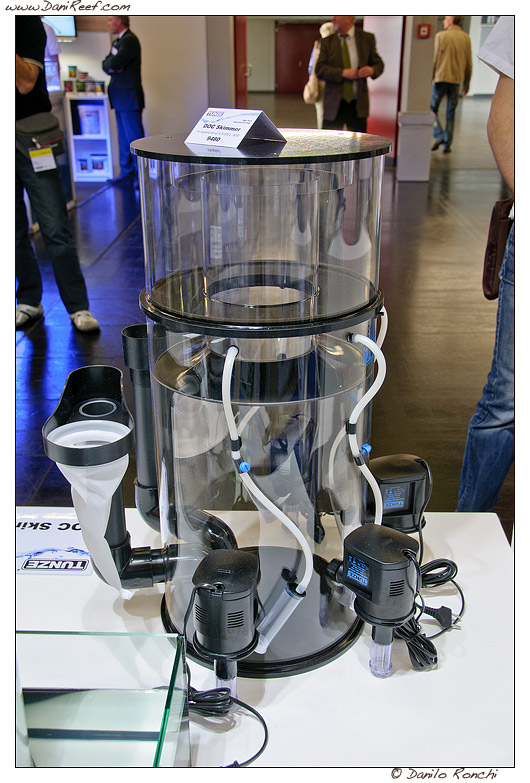