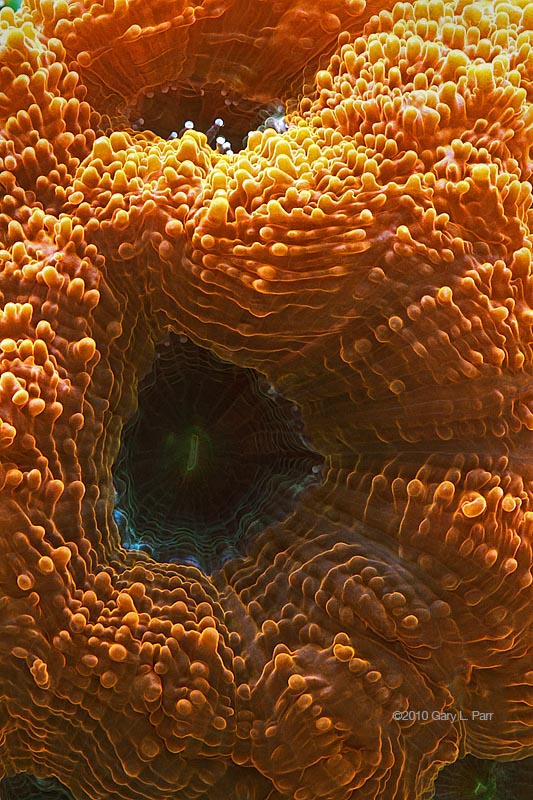 During one of my trips to Florida last year I had an opportunity to photograph the beautiful display tank in the Coral Corral store in Tampa. One of the many corals in the aquarium was this, I believe, Acanthastrea bowerbanki. What struck me was the polyp depth. They reminded me of scenes from movies where the hero is being chased through the jungle by a gang of bad guys and stops suddenly at the edge of a waterfall that seems to go down forever into a dark abyss. The question is always whether to fight and risk capture/death or to jump and hope the pool at the bottom is really deep and not full of rocks.
The photographic challenge was to capture the feeling of falling into that abyss using a single polyp. I had to search the colony a bit to find a polyp that had the right perspective. I decided to include the polyp above it in the final image because, after all, it is a coral photo. I also liked the feeding tentacles peaking over the edge.
To achieve the necessary depth of field, i.e., to have the entire shot in focus so the “abyss” part doesn’t become blurry, was not possible with one shot, no matter what aperture setting I used. The solution was to create a stacked image which, in this case, involved making eight shots using a relatively shallow depth of field and combining them into one image with Helicon Focus Pro software. Image stacking uses the “in-focus” portion of each image. When combined, the result is one image with much more depth of field than is possible with a single shot. When stacking images, fleshy corals, such as this, are very challenging because they tend to expand or contract and almost always choose to do so while I’m shooting the stack of images. When this happens, the final stacked image won’t work because the details don’t line up from image to image. I got lucky this time and the coral remained absolutely still.
The end result was exactly what I was after–a look into the deep polyp in which everything is in focus, all of the way to the mouth. I also was able to expose the shot such that I retained detail in the strongly lit areas and in the critical deep part of the polyp. The best part, for me, is that I get a slight sense of vertigo when I look at the image.
Technical stuff: 8 images stacked, all at 0.5 sec. @ f/14, ISO 400, Canon 7D, Sigma EX180 macro, extension tubes, tripod, remote release, mirror lockup. Stacking done with Helicon Focus Pro.–Gary L. Parr, www.gparr.com, www.reefthreads.com