Invasive brittlestars discovered in the Atlantic 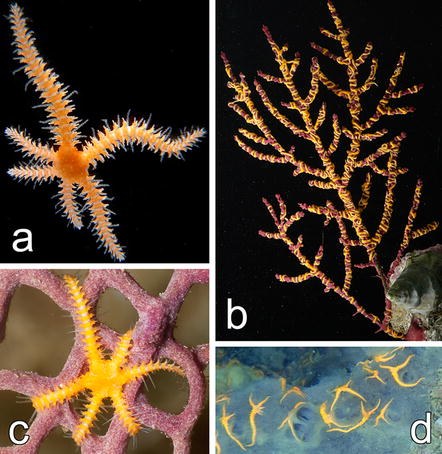 Fig. 1 a The disks of O. mirabilis (≈2 mm diameter for ophiuroids in the figure) and the arms (~5 times as long) contrast in color with the host species b Leptogorgia punicea, c Gorgonia ventalina, and d Mycale angulosa.

As mentioned, these brittlestars were originally only found in Pacific waters where they infest gorgonians and sponges in multitudes. It is believed they potentially originated from shipping traffic, as the brittlestars were found in ports almost 4,500 miles apart. Given their almost exclusive yellow-color (seen above), they are also believed to have originated from a single lineage.

The map to the right highlights where these brittlestars were observed, starting in the year 2000.  In 2000, they were found in Brazil off Ilha do Pai, Rio de Janeiro. Next in 2004, they were observed in Farol da Barra, Bahia. In 2009, O. mirabilis was seen in Ilha do Mel, Paraná.  Finally in 2011, they were spotted in Camden Park Bay, St. Vincent, Lesser Antilles. As of 2012, they are reported more and more throughout the St. Vincent area.

According to researchers Hendler, Migotto, Ventura, and Wilk who penned the paper, the 6-armed brittlestars’ proliferation “is enhanced by its capacity for fissiparous, asexual reproduction, a process producing cloned progeny with regenerating arms.”  It is not host-specific, meaning they can exist on numerous gorgonians and sponges without problems. This low host specificity “may also help it colonize new territory.” Given the many unknowns, it is still unclear how this new brittlestar will impact the Atlantic reef environments in the coming years.

Gordon Hendler of the Natural History Museum of Los Angeles County and author of the paper is asking for help tracking these brittlestars. If you happen to see them while diving, photograph them and note the time, date, and location, and forward it to Gordon at hendler@nhm.org for entry into his database. He would also like preserved specimens from both the Pacific and Atlantic, if possible, for further identification work.