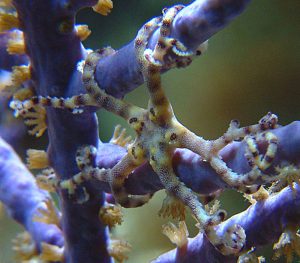 The little star arrived in my tank as a hitchhiker on a Purple Sea Plume, Pseudopterogorgia sp. just over 10 months ago. I feed it directly every night with a pipette, its favorite snack is small pieces of krill. I believe that it has probably doubled in size whilst in my tank and has only moved position once on its gorgonian home. I assume the move was prompted by its increased size. During the day it spends its time tightly curled around a couple of branches of the gorgonian and at night its arms are spread wide in the typical basket star feeding pattern. It recently had a near death experience in the jaws of my Scarlet Hawkfish who plucked it right off of its gorgonian home whilst trying to steal the piece of food that I had just offered the star. Interestingly, the star apparently didn’t taste very nice or something because the fish spat it out again almost immediately, much to my (and no doubt the stars) very great relief. The stranded basket star crawled back on to its gorgonian with incredible speed when I offered it a branch minutes later.