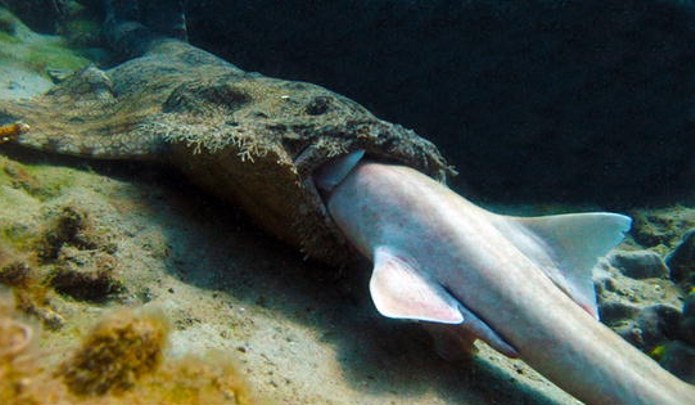 In August 2011 researchers Ceccarelli and Williamson from Australia were performing a fish census just off of Great Keppel Island which is situated on the Great Barrier Reef. While they were taking note of the local fish population they happened upon something that surprised them.

What they encountered was a four-foot long wobbegong shark (Eucrossorhinus dasypogon) in the process of eating a three-foot long brown-banded bamboo shark (Chiloscyllium punctatum) head first. Wobbegong sharks are bottom ambush predators that prey upon “benthic invertebrates, cephalopods, teleost fishes, and, in larger species, occasionally other sharks. … With a jaw structure that facilitates dislocation, a large gape, and sharp, rearward-pointing teeth, wobbegongs can grasp relatively large prey before swallowing it whole.”

The two researchers observed the wobbegong for 30 minutes and in that time neither shark moved. It was assumed that it would take many more hours for the wobbegong to completely ingest the bamboo shark.

This event highlights just how efficient of an ambush predator that a wobbegong can be.