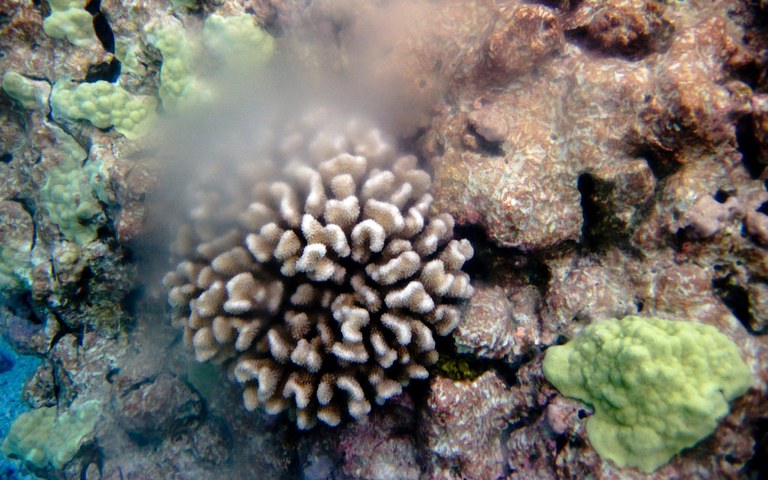 
From the University of Central Florida:

Scientists have known for a while that coral reefs around the world are dying, and in a worst-case scenario they were counting on large, healthy-looking corals to repopulate.

But a new study presented at the 13th International Coral Reef Symposium in Honolulu today shows that these seemingly healthy colonies are “Coral Zombies” with no reproductive ability, which makes them useless in a recovery effort.

“It’s pretty discouraging,” said University of Central Florida biologist John E. Fauth, one of the researchers who sampled 34 sites across the Caribbean for the study. “This is not good news.”

Cheryl M. Woodley, a marine biologist with NOAA’s National Ocean Service led the study, which sampled 327 coral colonies off the coasts of Florida, Puerto Rico, and St. Thomas, St. John and St. Croix in the US. Virgin Islands. The researchers analyzed the samples to determine the reproductive ability of elkhorn coral (Acropora palmata), which is a threatened species.

In some places — including two sites in the Florida Keys — the coral had no eggs or sperm. The study suggests that with no ability to propogate, elkhorn corals in those spots will eventually die out — like zombies, they essentially are walking dead. Two samples from a more remote area in St. Croix found the coral had 100 percent reproduction ability.

“Basically the places with the heaviest tourism had the most severe damage,” Fauth said. He dove and took samples from all of the Puerto Rican sites in the study, along with marine biologists Michael Nemeth and Katie Flynn.

This study adds to growing evidence that coral reefs frequented by divers are in peril. Last year a study found that oxybenzone, a common UV-filtering compound in sunscreen, is in high concentrations in the waters around the more popular coral reefs in Hawaii and the Caribbean. The chemical not only kills coral, it causes DNA damage in adult corral and deforms the larval stage, making it unlikely they can develop properly. The highest concentrations of oxybenzone were found in reefs most popular with tourists. Fauth was a co-investigator of that 2015 study, which was published in the journal Archives of Environmental Contamination and Toxicology.

Oxybenzone also causes coral bleaching, which is a prime cause of coral mortality worldwide. Corals bleach when they lose or expel the algae that normally live inside them, thus losing a valuable source of nutrition.

In another study presented at the symposium on Monday, researchers found the same sunscreen chemical is common in Hawaii, Florida and the U.S. Virgin Islands, and concentrations peak during high tide.

“It’s almost counterintuitive,” said Fauth, who is a co-author of that study as well. “We think that aerosol sunscreen is to blame.” When you spray sunscreen, much of it lands on the sand or water, Fauth said. So when the high tide comes in, it collects all the overspray and pulls it back out to sea.

Together, the two new studies show that coral reefs are in more danger than already thought. Several species of coral are listed as threatened under the U.S. Endangered Species Act.

Reproductive failure in Caribbean coral already was identified as a critical factor preventing their recovery. The news that even corals that appear healthy may be incapable of reproducing and that a chemical linked to coral decline commonly occurs at high concentrations is a double blow, Fauth said.

“We have to act now,” Fauth said. “It is simple things like not using chemicals that harm our coral. Wear rash guards or go without sunscreen during dives. And it is making a serious commitment to conservation and management of our reefs. Coral reefs are the world’s most productive marine ecosystems and support commercial and recreational fisheries and tourism. We want to do everything we can to ensure that the underwater beauty we see today is around for generations to come.”

Other members of the Coral Zombie study include: A.R. Burnett, S. Griffin, L.A. May and Z. Moffitt of the NOAA NOS, M. Brandt from the University of the Virgin Islands, C.A. Downs from the Haereticus Environmental Laboratory, Z. Hillis-Starr from the National Park Service, K.S. Lunz of Florida Fish and Wildlife Research Institute and Z. Miller, A. Moulding, M. Nemeth and D. Williams of NOAA Fisheries.