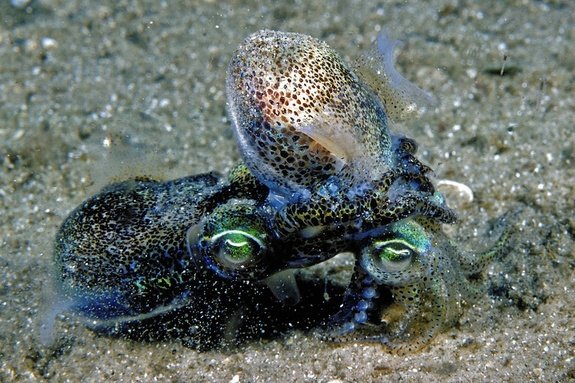 Here is some more “news” that I’m sure you couldn’t predict by yourself.  The study, conducted by a graduate student (hmmm) at the University of Melbourne, shows that squid (Dumpling Squid to be exact) are sometimes exhausted after three hours of sex.  I know, real surprise with that one, but there is indeed some cool details to mention.  First of all, the male squid grasp the females and “blow water into her mantle for hours” (note: tried it, doesn’t work).  Second, the male squid are basically exhausted for around 30 minutes which may decrease their ability to hunt, and could potentially expose them to predators, which may have some impact on their natural lifespan.  Dumpling Squid are described by the phrase “live fast, die young”.  Seems appropriate.  I guess my only question is, IS IT MANDATORY THAT ALL GRADUATE STUDENTS WRITE THEIR THESIS ON ANIMAL SEXUAL PRACTICES?