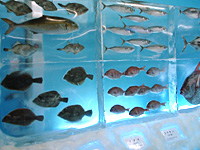 Japan is known for taking something seemingly normal and creating a new, significantly weirder version… just because they can (and they’re silly like that).  Enter the Kori no Suizokukan or “ice aquarium” in English.  I don’t know what to make of it personally and I’m sure people will have varying opinions, but from what I can see it looks like food fish were used.  Japan is a major hub for the marine ornamentals hobby and it isn’t unusual to see the country’s various well known stores show up in the reef news feeds on a regular basis, but this is one of the strangest things I’ve seen come out of there yet.  Hit the jump for details.

The room stays at a brisk 5 degrees Fahrenheit and houses 450 marine popsicles spanning 80 distinct species.  I myself think these animals are far more impressive when displayed at a warmer climate where water is liquid and the specimens are breathing, but that’s just me.  To be fair though, Japan has a huge marine hobbyist population and I don’t think they would have gone for such an exhibit if it included anything beyond what would have normally been frozen and eaten anyway.  I doubt visitors will be seeing anything like a Boylei angel entombed there (I hope).  What do you think?

Story from Weird Asia News with more pics of the weirdness