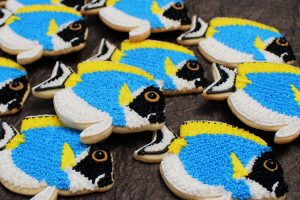 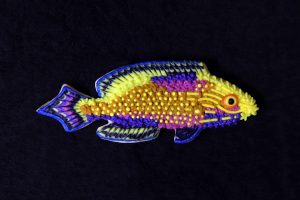 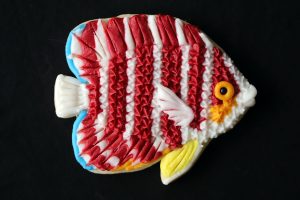 Artist, cabinet-maker, owner of Foursquare Aquatics, and all-around great guy Jason Langer has been making these incredible fish cookies for nearly a decade. If you’ve been lucky enough to run into him at a reef conference and get one, you know that they are as delicious as they are beautiful…though it seems like a shame to eat such a lovely little piece of art! I connected with him recently, and asked him about the history of these cookies, his process, and more. He replied:

“I started making the ‘fish cookies’ in 2013.
Our family always makes cut out cookies for holidays and I just took it a few steps further as I got older.
I do make my own cutters by hand. I have a couple of ‘build thread’ threads on a couple of forums where I show/explain how I make the cutters, the cookies and then decorate them. (Also discussed in the presentation.)
I do sell them by commission but the vast majority of them are handed out as gifts. All of the cookies that I hand out at the events are gifts.

I started making them for the staff at the LiveAquaria Coral Farm in Rhinelander when I would visit for the Open House Tours. When I attended my first MACNA, I made cookies for the speakers and various friends that I had made in the hobby. The presentation discusses this history in more depth.
My only real process is that I would like to create a library with as many reef aquarium fish cookies as possible. That’s why the last few batches have been centered around a specific group of fishes so I can check them off of my list. This will take a while. There’s other plans as well, but the fish cookies aren’t the highest priority at the moment.” 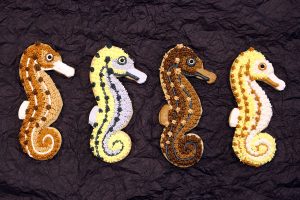 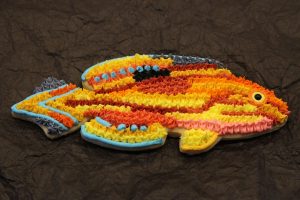 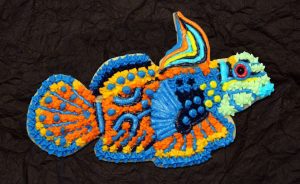 Thank you Jason, for taking the time to talk with me!
If you’d like to learn more, here is the presentation he mentioned:
https://www.youtube.com/watch?v=DF6t9wDqir8

And here is what he has to say about his company:

“I have been in the marine aquarium hobby since 1992 and I have a real passion for reef aquariums; the fish, the corals and the invertebrates.
I am also a long-time cabinetmaker and woodworker. I have been in the woodworking industry for over twenty years. I have years of experience in designing and building my own projects; cabinets, furniture, built-ins and artworks.
The combination of my profession and hobby has led me to creating many projects for the aquarium hobby. And all of this has led me to here; Foursquare Aquatics.
Back in the summer of 2016, I decided that I wanted to add an algae turf scrubber to my 120gal reef system. A few months of research and design led to the building of my first ATS unit. The first unit contained only one LED light fixture; as my space was limited. I installed the unit in early winter of 2016 and seeded the screen with algae from a local reef hobbyist. The algae began to grow immediately and my nutrient levels maintained at a consistent level. That ATS unit ran on my 120gal system until I tore the system down in the winter of 2017.
During this time, I was working on a new design that would include a second light and also remedy some of the imperfections of the first design. I was approached by a fellow club member, Bill Capman who taught at Augsburg University, about building some ATS units for a new biology lab at the university. In the summer of 2017, we had come up with what would become the design for the updated ATS unit. I ended up building four of these units for the Augsburg University biology lab.
With the revised design set, I scaled the design for a smaller unit to use on my own system. The very first of these units were built by the spring of 2018. One of the units was be installed on my upcoming new 120gal build and the other was for show. I brought the display unit to the local club’s expo and it generated some interest from local hobbyists and professionals. I was approached and asked if I would allow one of my ATS units to be tested at Bulk Reef Supply. If they found the ATS unit to be of value, they would be interested in offering them for sale on their website. After months of testing, Bulk Reef Supply was interested and we sat down for the first of many meetings.
In the summer of 2018, I created the business identity of Foursquare Aquatics. The Foursquare Aquatics name combines two of my more empassioned interests; craftsman style homes and marine aquariums.
The next identity that needed to be created was that for the ATS units themselves. After many lackluster ideas, I started to look at the ATS unit itself. It was a shiny black box; that’s it. What was going on inside of it was a mystery. This idea reminded me of the Egyptian black granite sarcophagi that were used to bury the sacred Apis bulls. The name of the bulls made for a great name for these mysterious black boxes.
As the year continued, I worked on many other aspects for getting Foursquare Aquatics and the APIS ATS units ready for production. By late winter of early 2019, the first order of the APIS-300 ATS units were placed, manufactured and delivered to Bulk Reef Supply. On the 25th of April, the APIS-300 ATS units were launched on the BRS website.”

To see more of his cabinetry work, visit his build thread HERE on reefs!