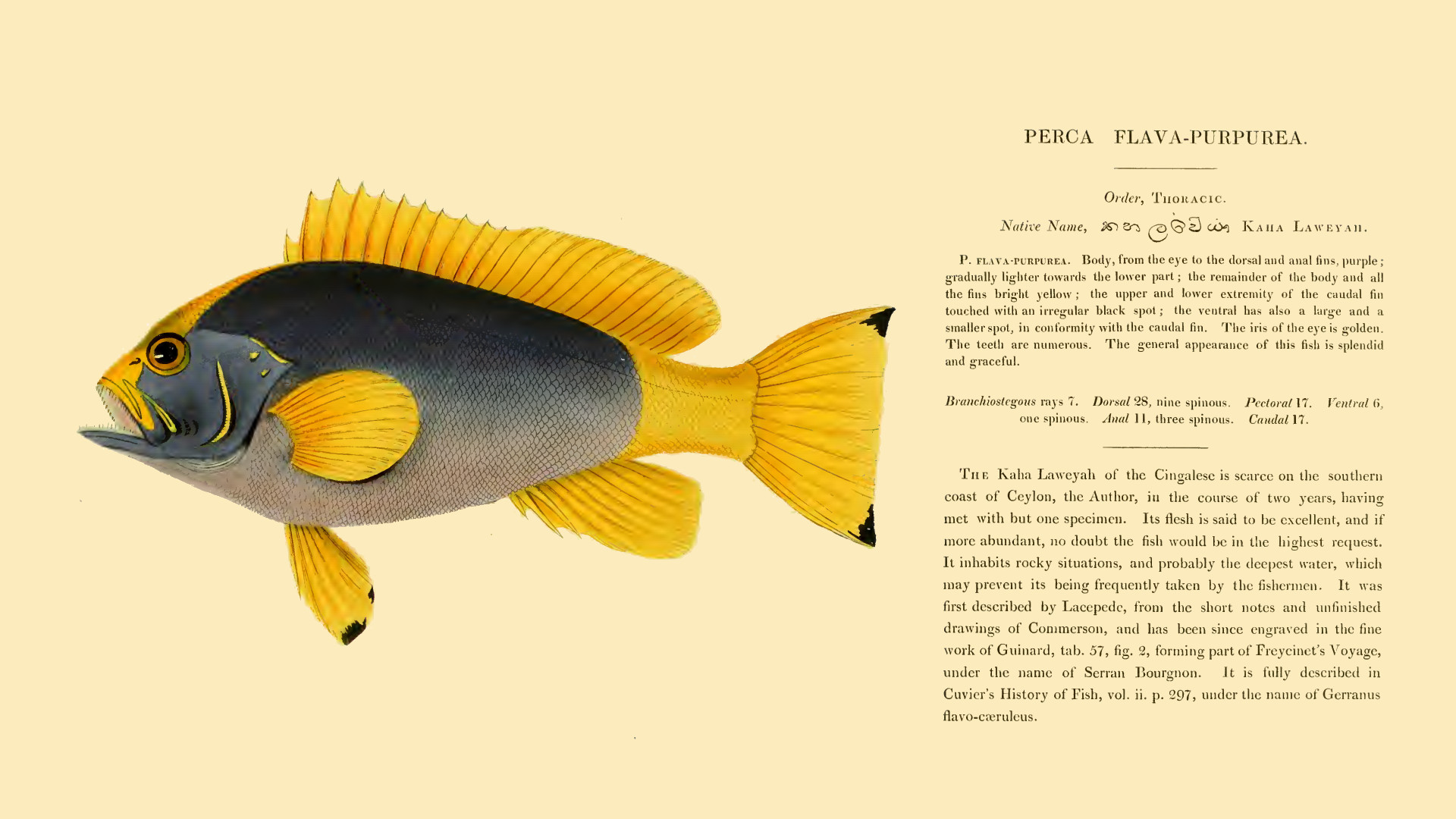 The 19th century was an extraordinarily prolific period for the study of coral reef biodiversity, but the names and accomplishments of the pioneering naturalists who made these early discoveries are today often forgotten. One of the more obscure figures from this time is John Whitchurch Bennett, a British army officer stationed on the island of Sri Lanka (known at the time as Ceylon). His lasting fame within ichthyology rests upon a single work published in 1828, the ponderously titled “A Selection from the Most Remarkable and Interesting Fishes Found on the Coast of Ceylon”.

Biographical information concerning Bennett is fairly scant. He served in Ceylon from 1815-1827, filling various civil servant roles, but accusations of financial mismanagement would eventually end his career. Upon returning to England, he set about publishing what would become his piscine magnum opus.

His compendium featured just thirty species, each of which was accompanied by a short morphological description, an explanation of the common name used by the Singhalese, and a brief paragraph discussing various aspects of the animal’s ecology or economic importance. Appearing beside each was a sumptuous full-color illustration by the engraver John Clark, whose work here stands as some of the finest natural history art from this era. Of the thirty species discussed, all but two were described as being new taxa by Bennett, though only six of these names are currently treated as being valid. Included among these are some very familiar faces.

Shortly after its publication, Bennett was accepted as a Fellow in Britain’s prestigious Linnean Society. He would continue to work as a printer, authoring natural history books informed from his experiences in Ceylon, but never again would he return to the study of fishes. Still, for his efforts, Bennett is honored today with two common coral reef species that bear his name. The Bluelashed Butterflyfish (Chaetodon bennetti) is a vibrantly colored Indo-Pacific species which feeds largely on coral polyps, making it one of the true holy grails for aquarists. And there’s also Bennett’s Sharpnose Pufferfish (Canthigaster bennetti), which is similarly widespread and commonly encountered in shallow lagoons. 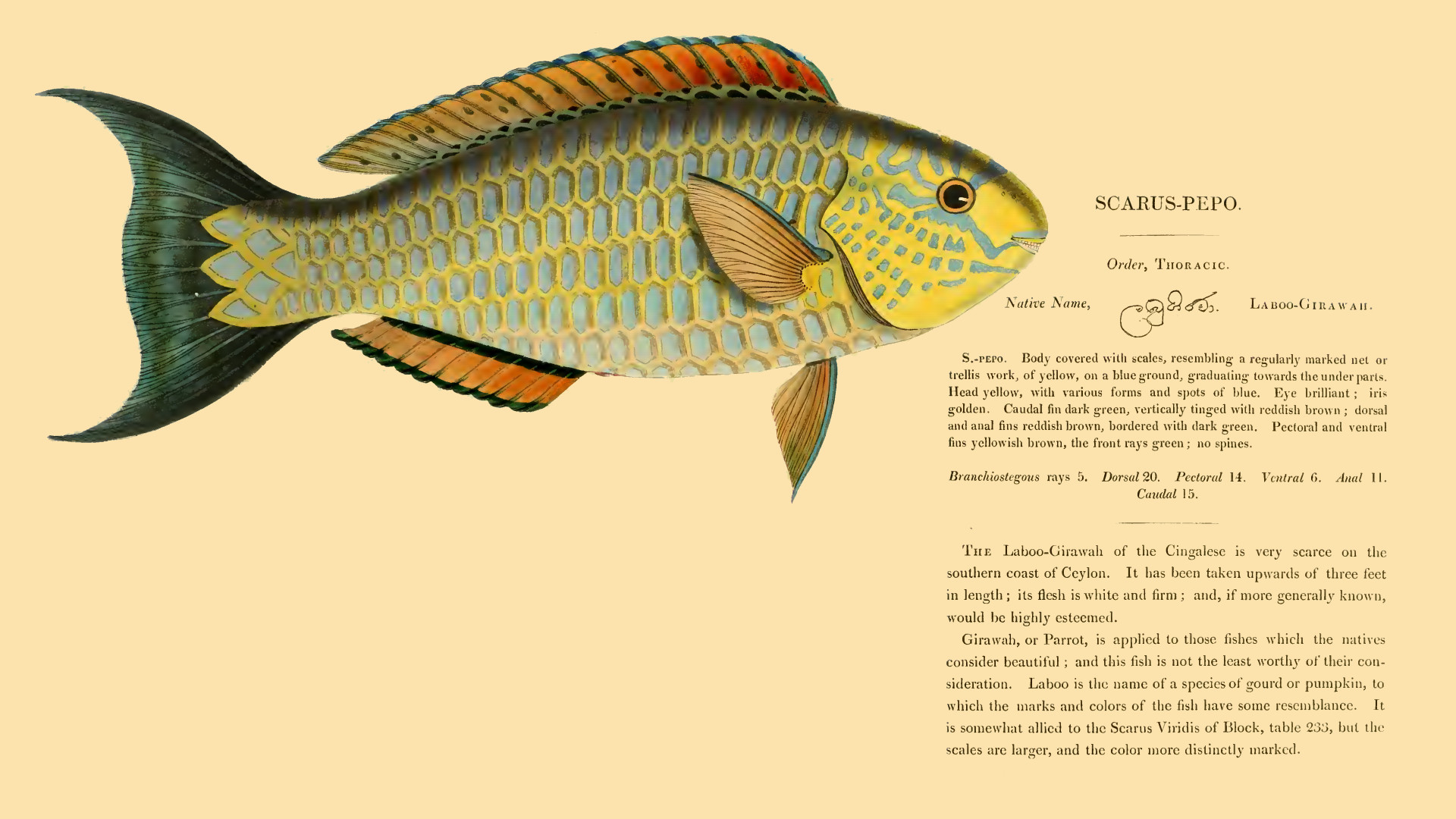 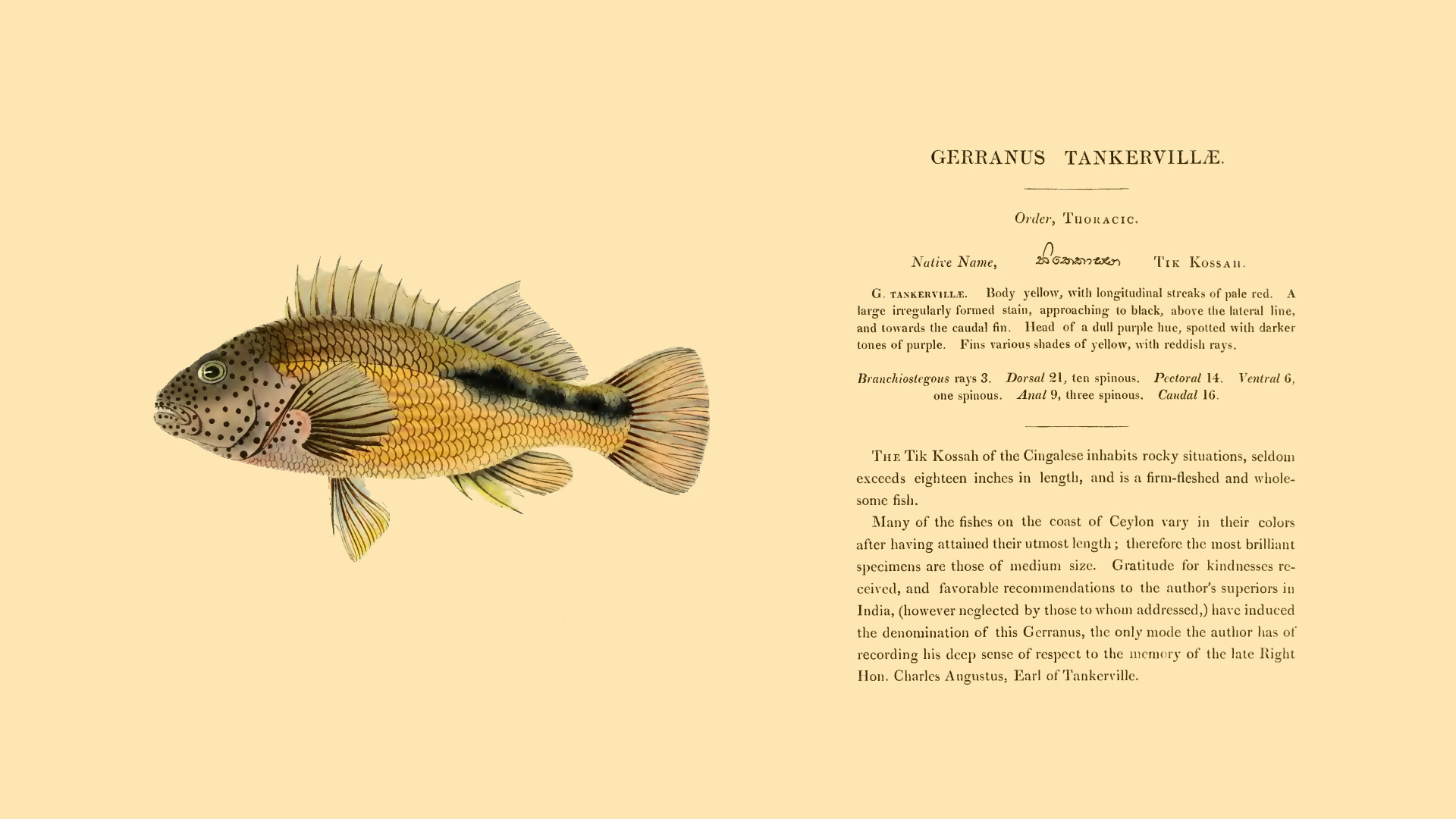 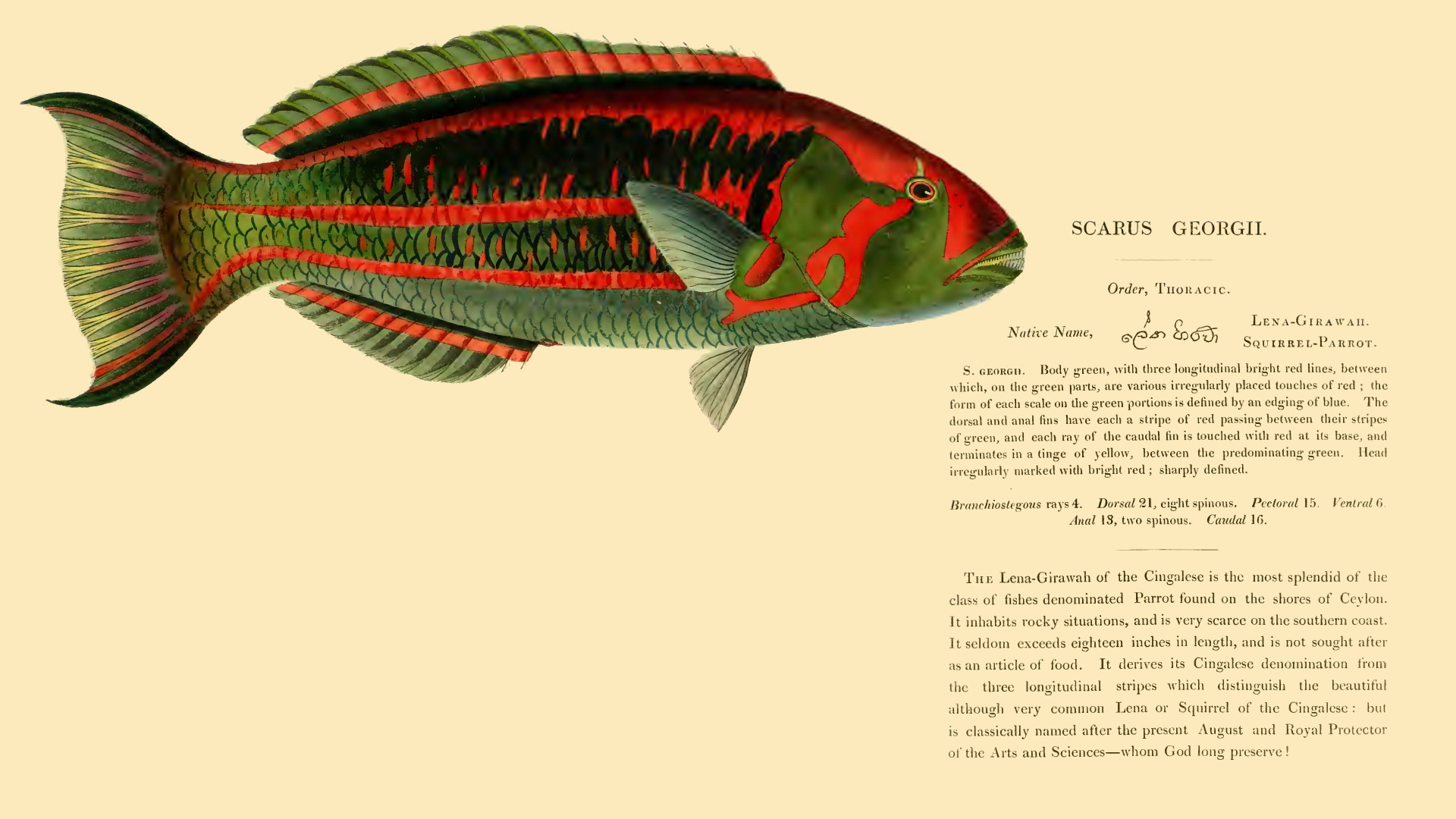 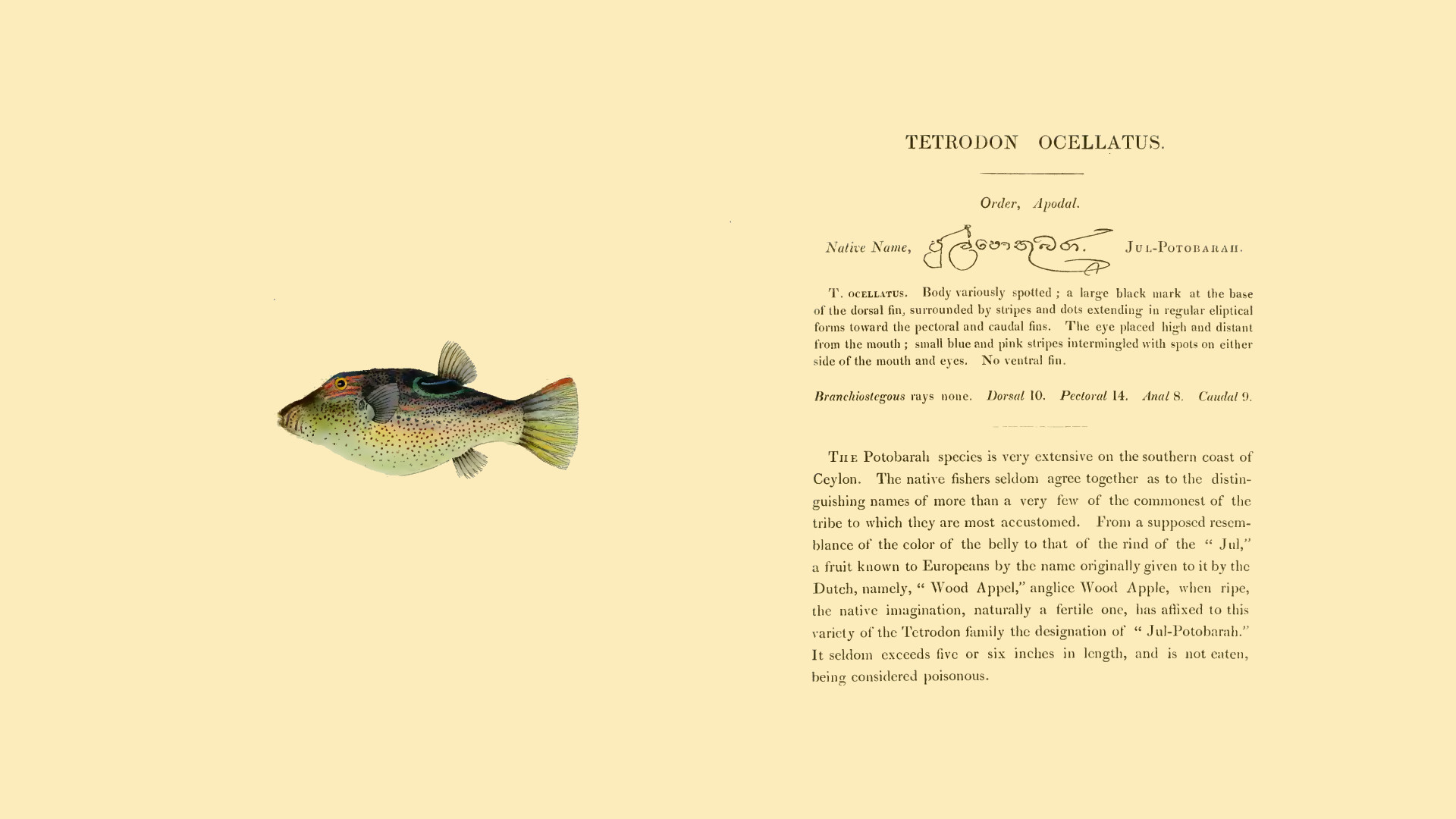 Bennett’s Sharpnose Pufferfish (Canthigaster bennetti), renamed by the inimitable Pieter Bleeker to honor this fish’s original discoverer. The name had to be changed on account of Linnaeus having already described a Tetraodon ocellatus (now Takifugu ocellatus, one of the fugu pufferfishes). 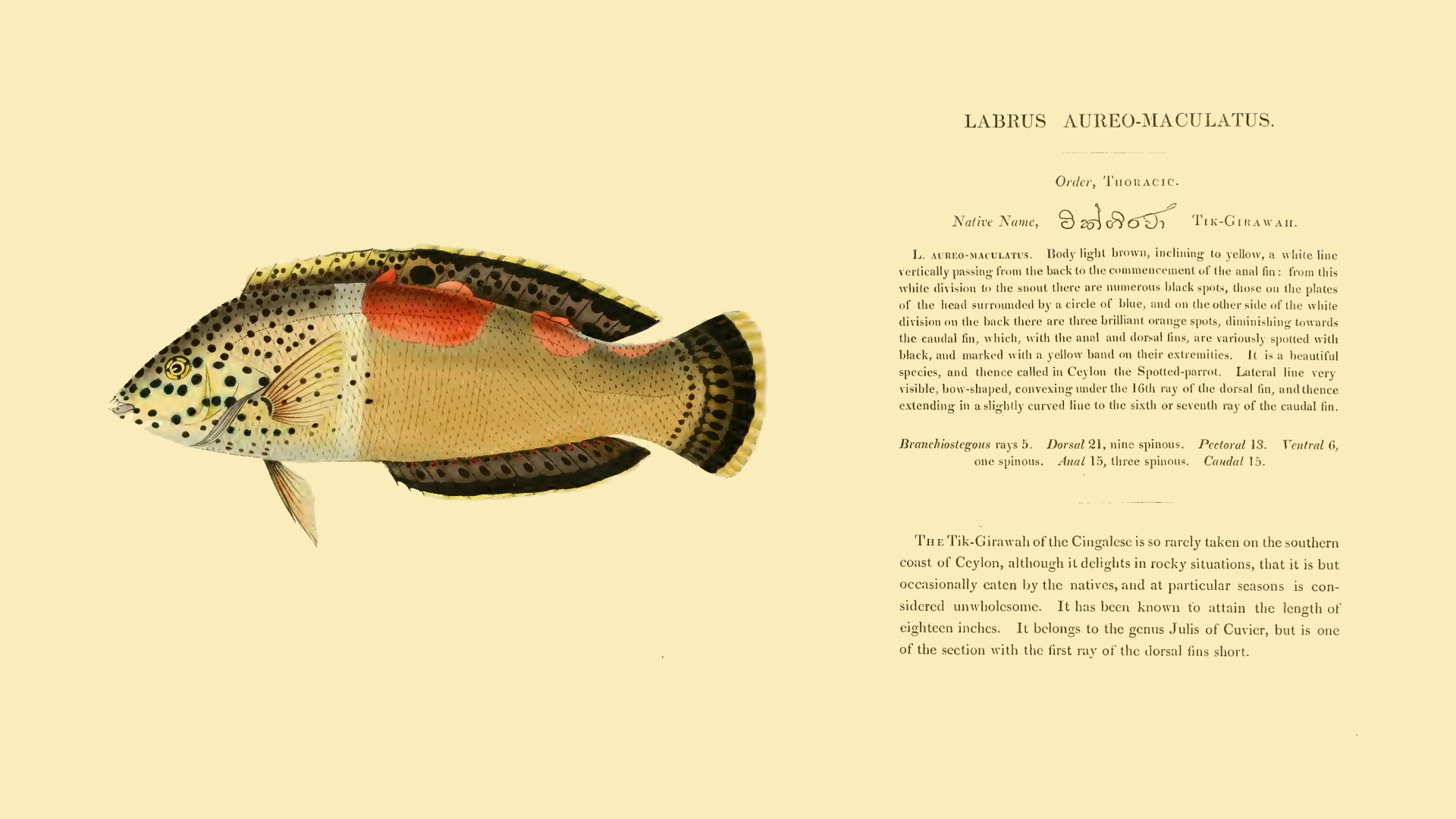 Clown Wrasse (Coris aygula), described by Lacepède. Bennett’s name references the golden spots along the back, while Lacepède alludes to the prominent dorsal spines of males. 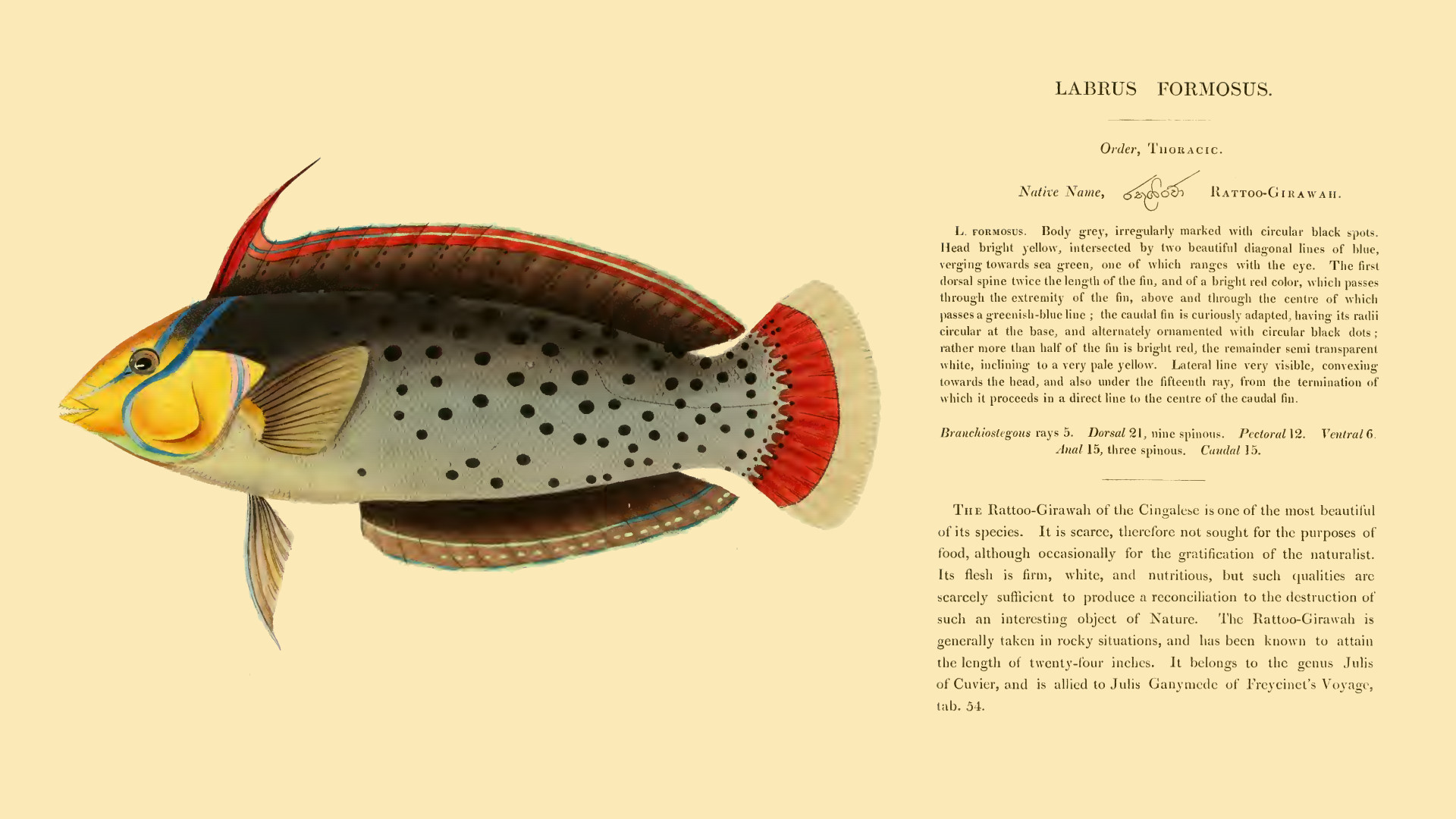 Finally, a species that Bennett was truly first to describe, though this one is now known as Coris formosa. Many species bearing the name “formosa” or “formosus” are named for occurring in Taiwan (formerly Formosa), but the name for this Sri Lankan fish derives from the Latin formosus, meaning “beautiful, well-formed”. 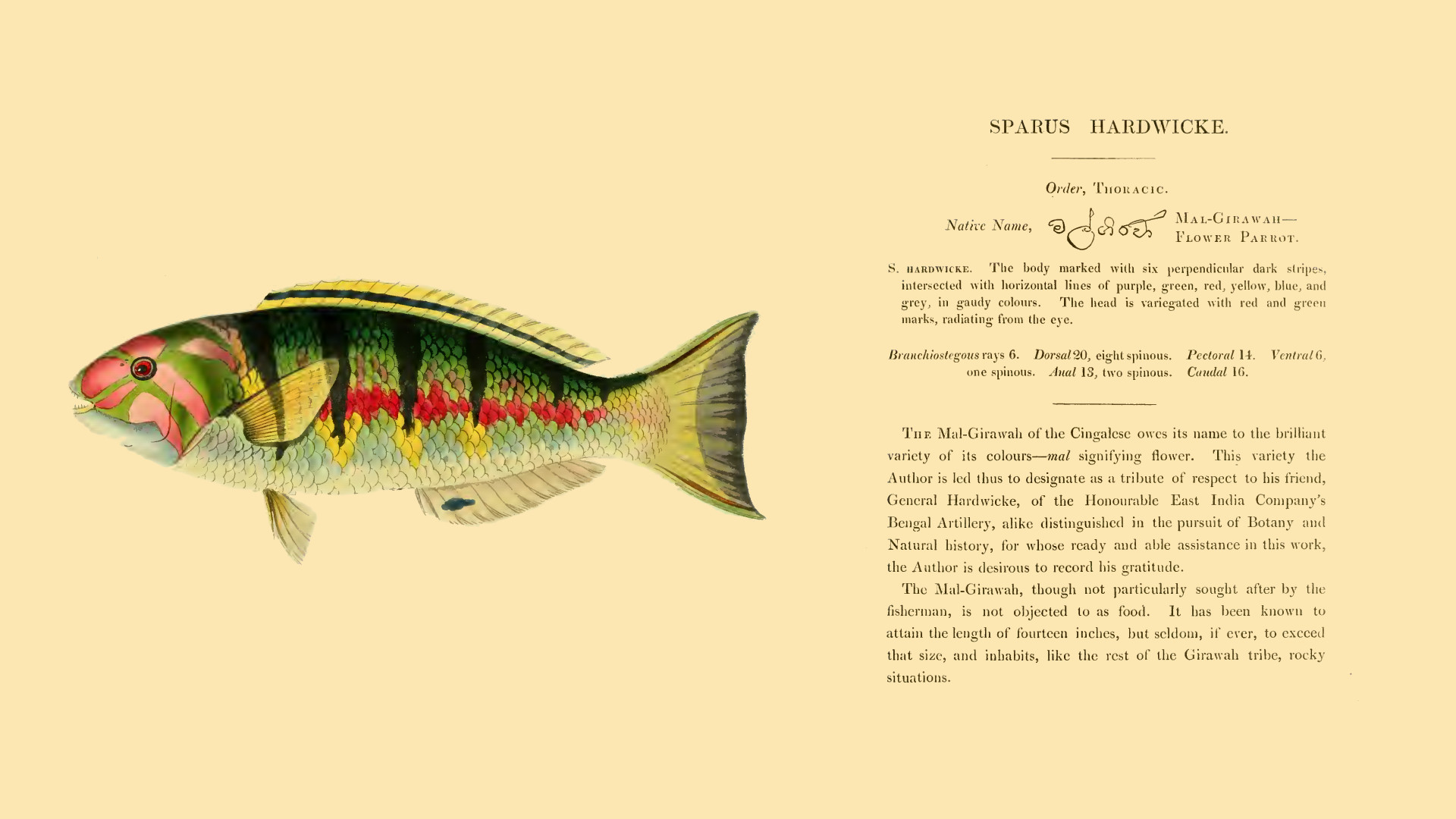 Hardwicke’s Wrasse (Thalassoma hardwicke) was named for a leading naturalist in nineteenth century India, General Thomas Hardwicke of the East India Company. Many other species (including a pipefish) are named in his honor, and Hardwicke is said to have had the largest collection of Indian natural history illustrations in his time, totaling around 4,500. 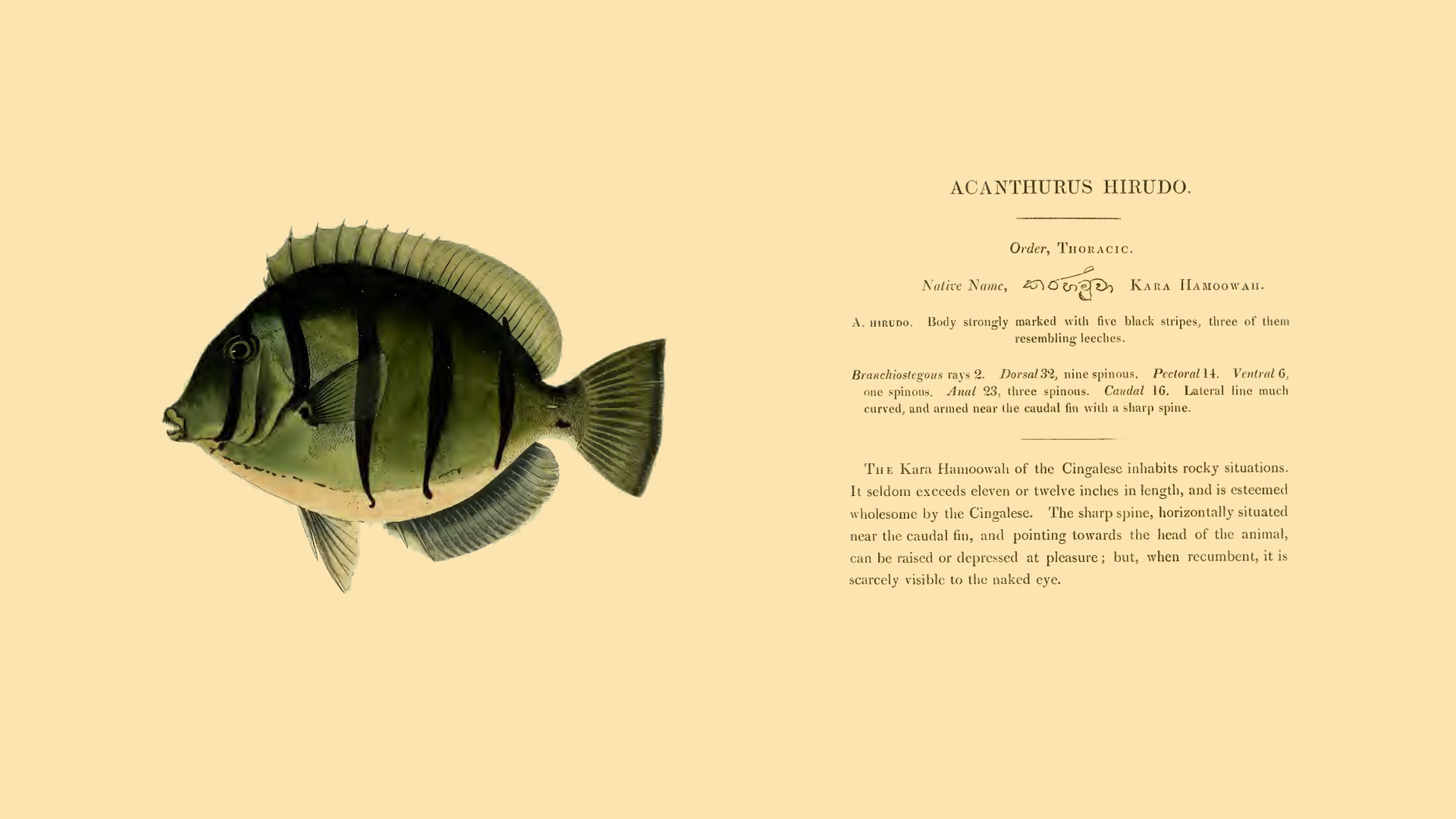 Convict Surgeonfish (Acanthurus triostegus), described by Linnaeus. There’s no word on why Bennett chose to name this one “hirudo”, which presumably derives from the Latin for “leech”. 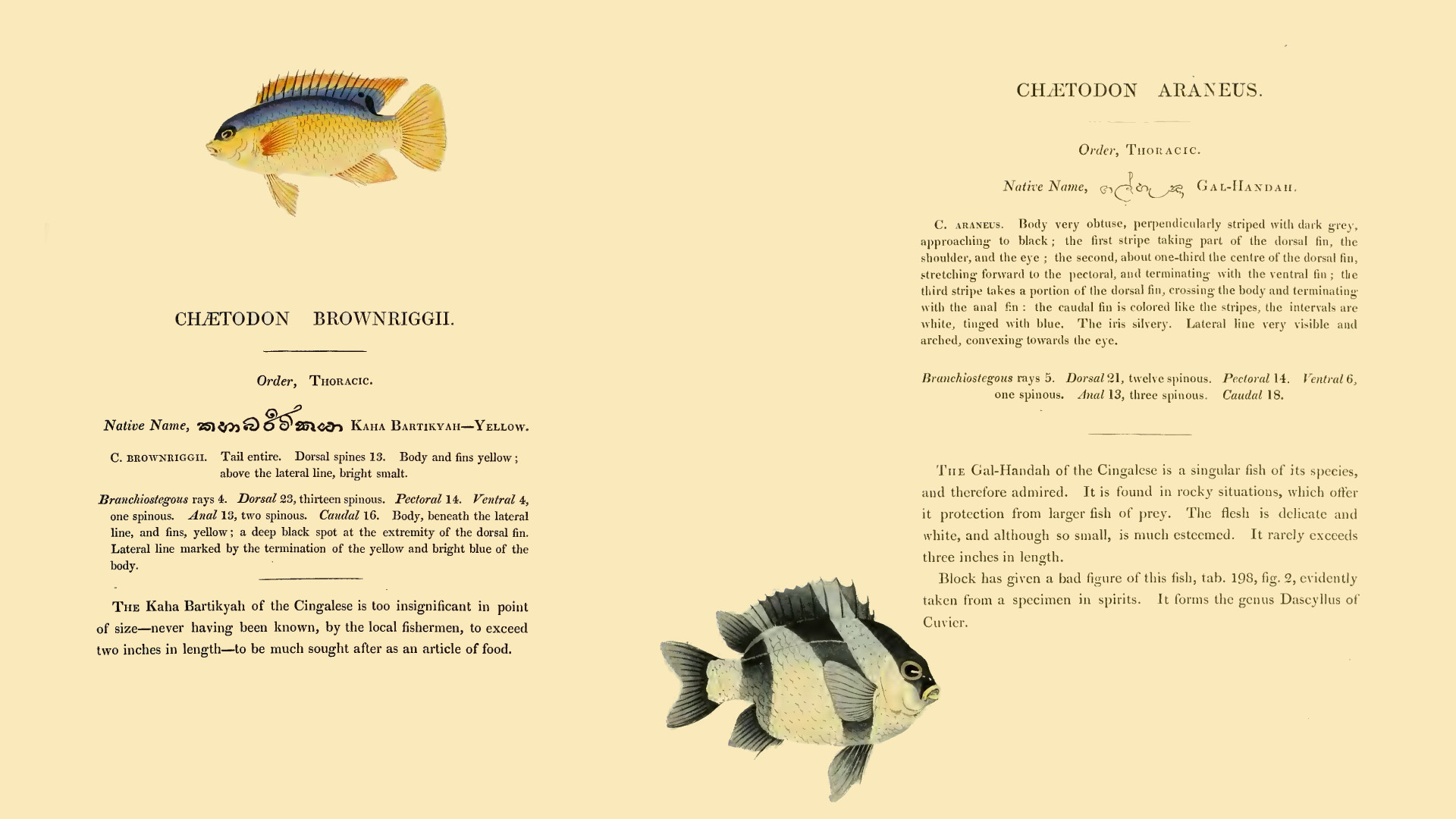 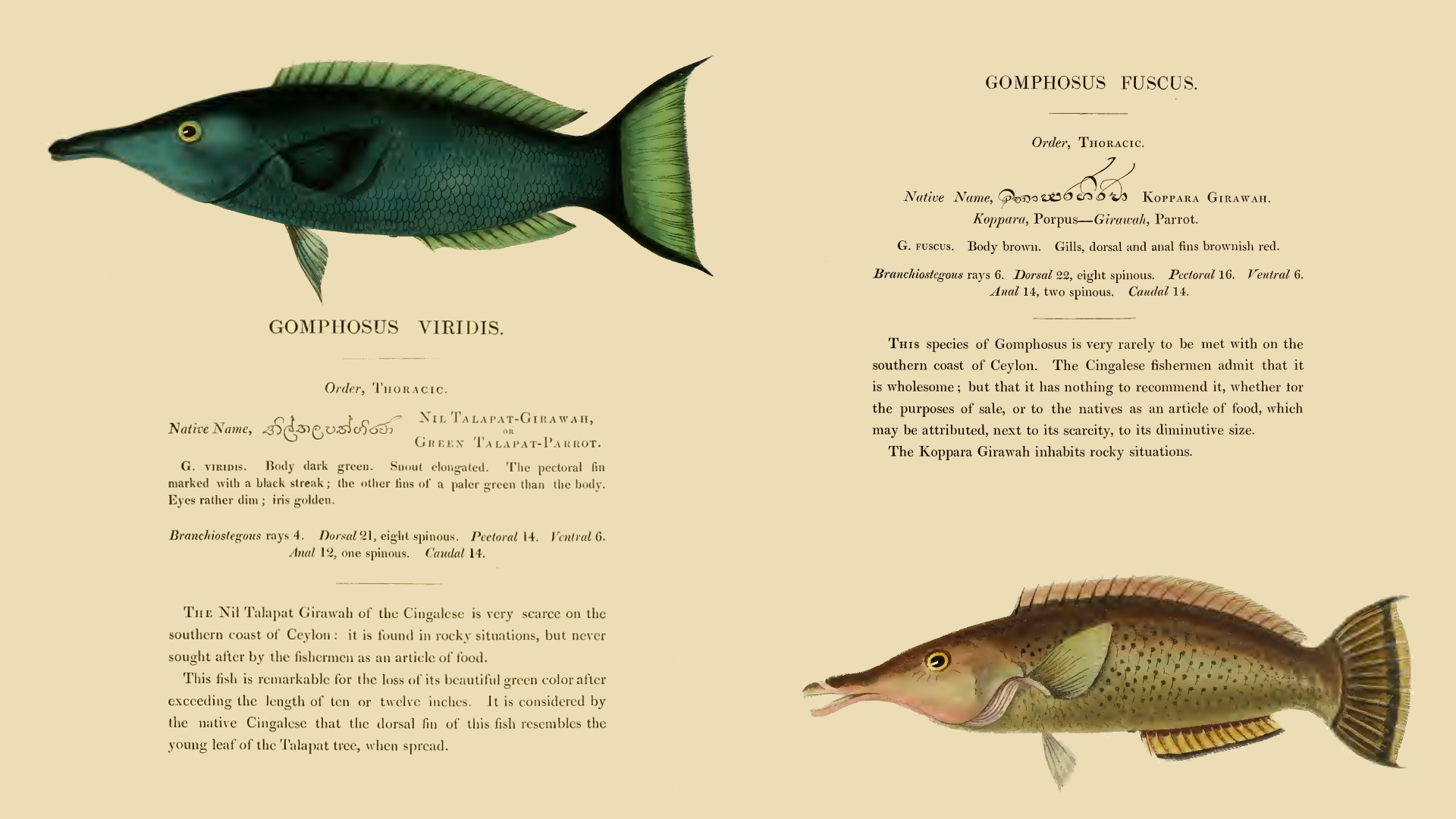 Bennett named both the male and female of the Green Bird Wrasse (Gomphosus caeruleus), but Lacepède had already beaten him to this one. 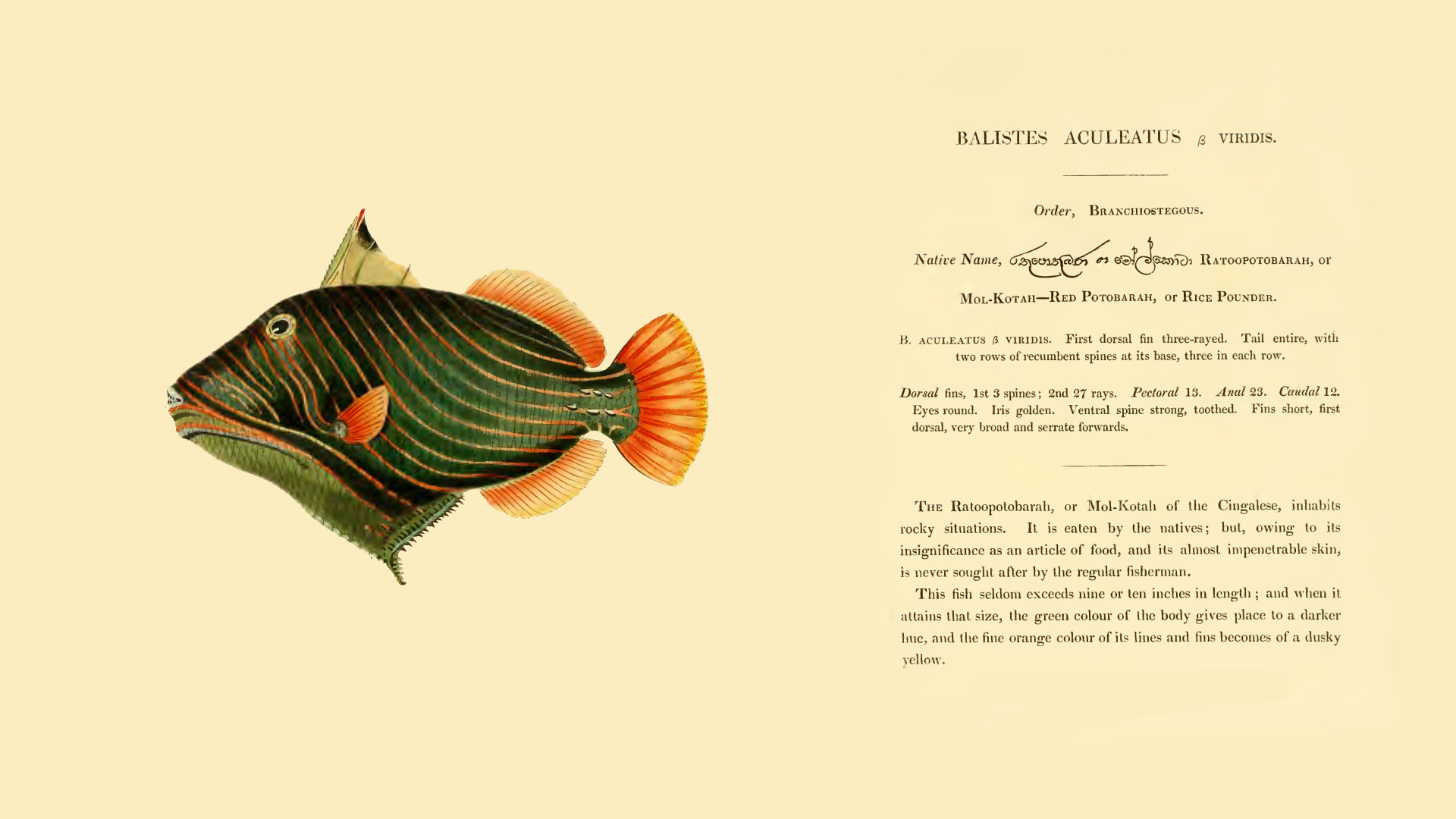 Bennett seems to describe this Undulated Triggerfish as a green subspecies of the Picasso Triggerfish (Rhinecanthus aculeatus), which Linnaeus had first described as Balistes aculeatus. We now know this as Balistipus undulatus, which was described from Sumatra by the famed Scottish explorer Mungo Park. Poor Mungo would later drown while under attack from bow & arrow-wielding natives whilst searching for the end of the Niger River. 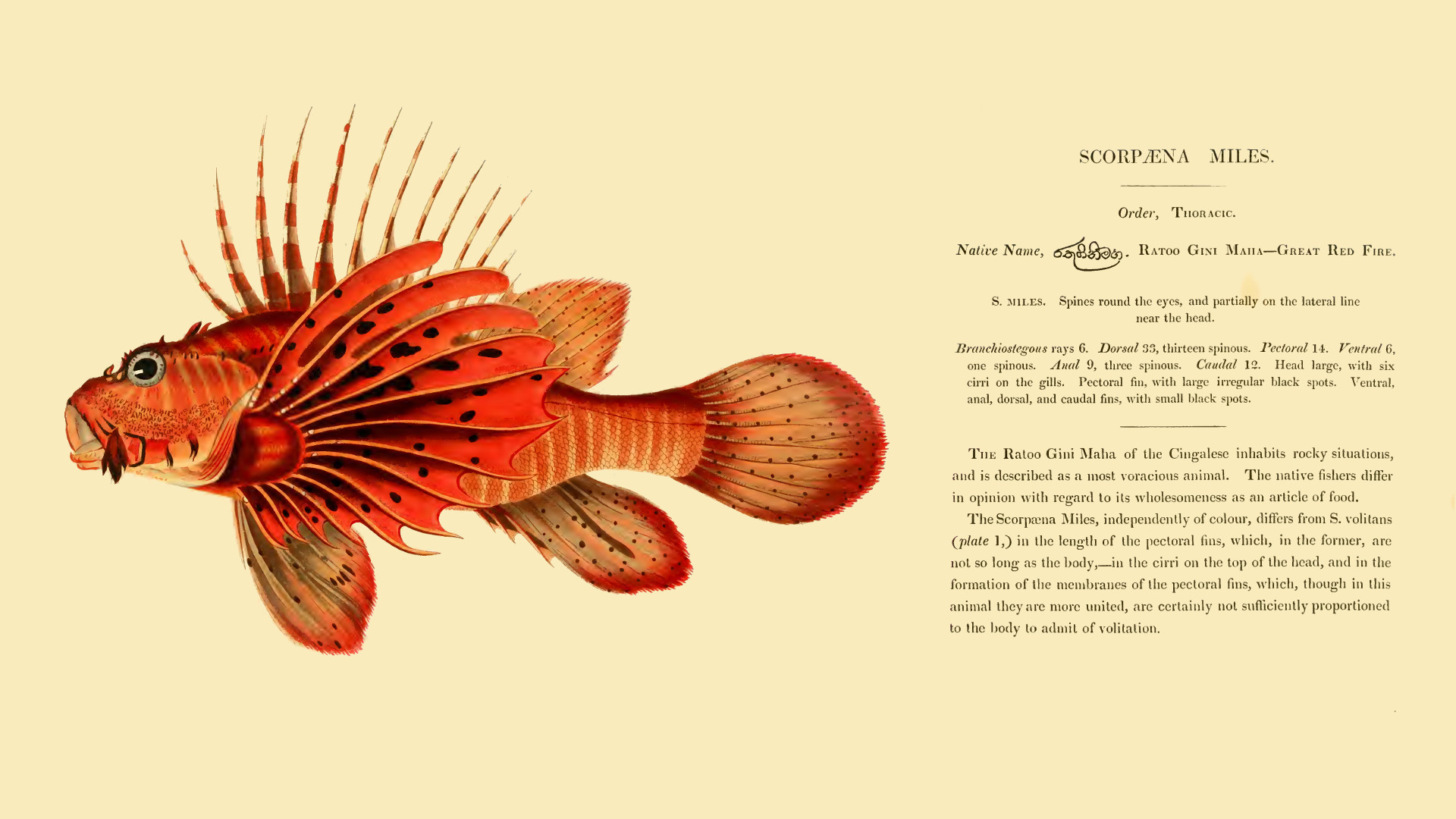 Pterois miles is the Indian Ocean counterpart to the Pacific’s P. russelli (=volitans). Its name comes from the Latin miles, meaning “soldier”. Red is a color frequently associated with the military (especially so in Britain), and so several similarly colored fishes have been given this name, either as a common name or a scientific name. Soldierfishes are a prime example, as is the Scarlet Wrasse (Pseudolabrus miles). 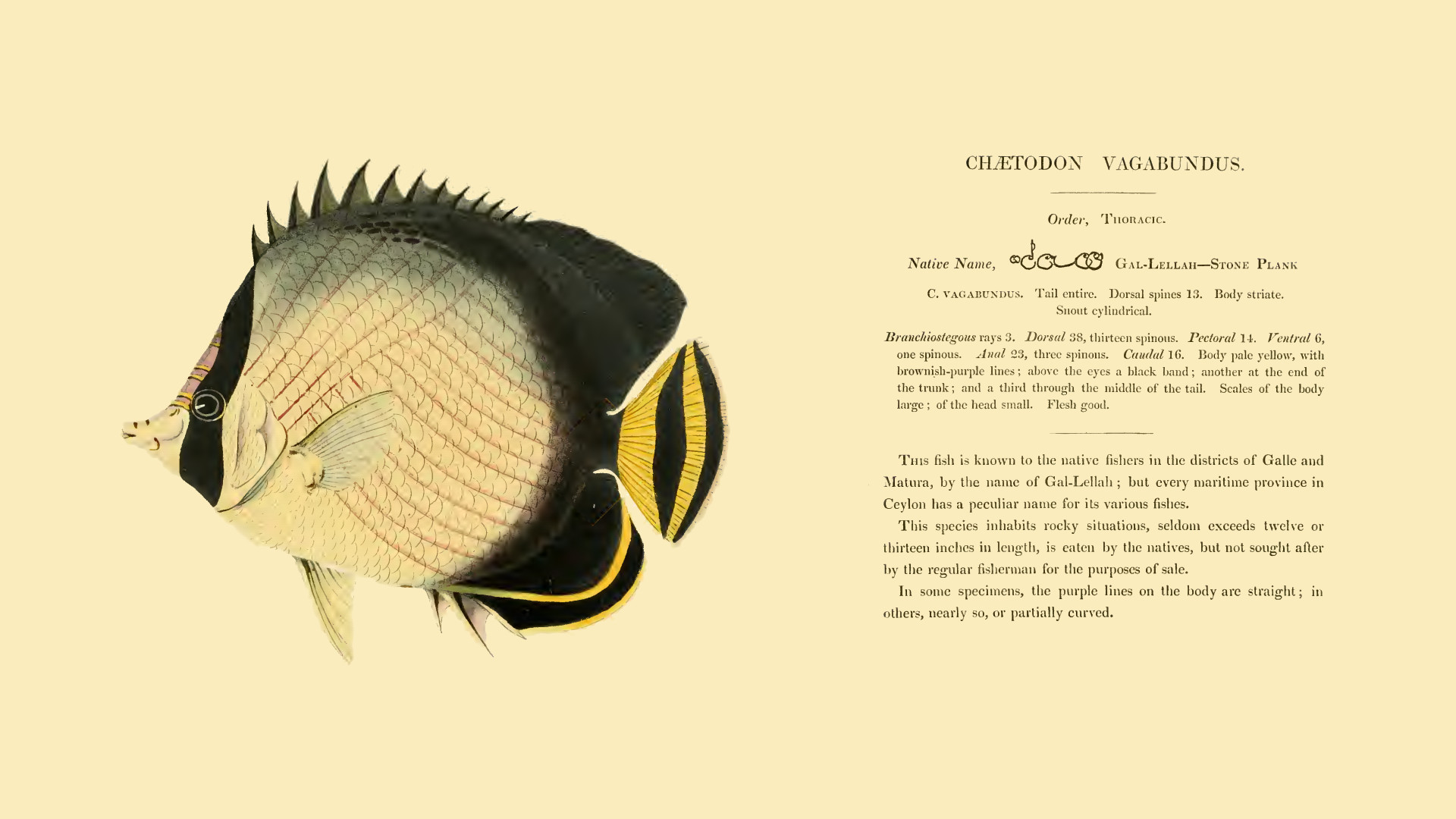 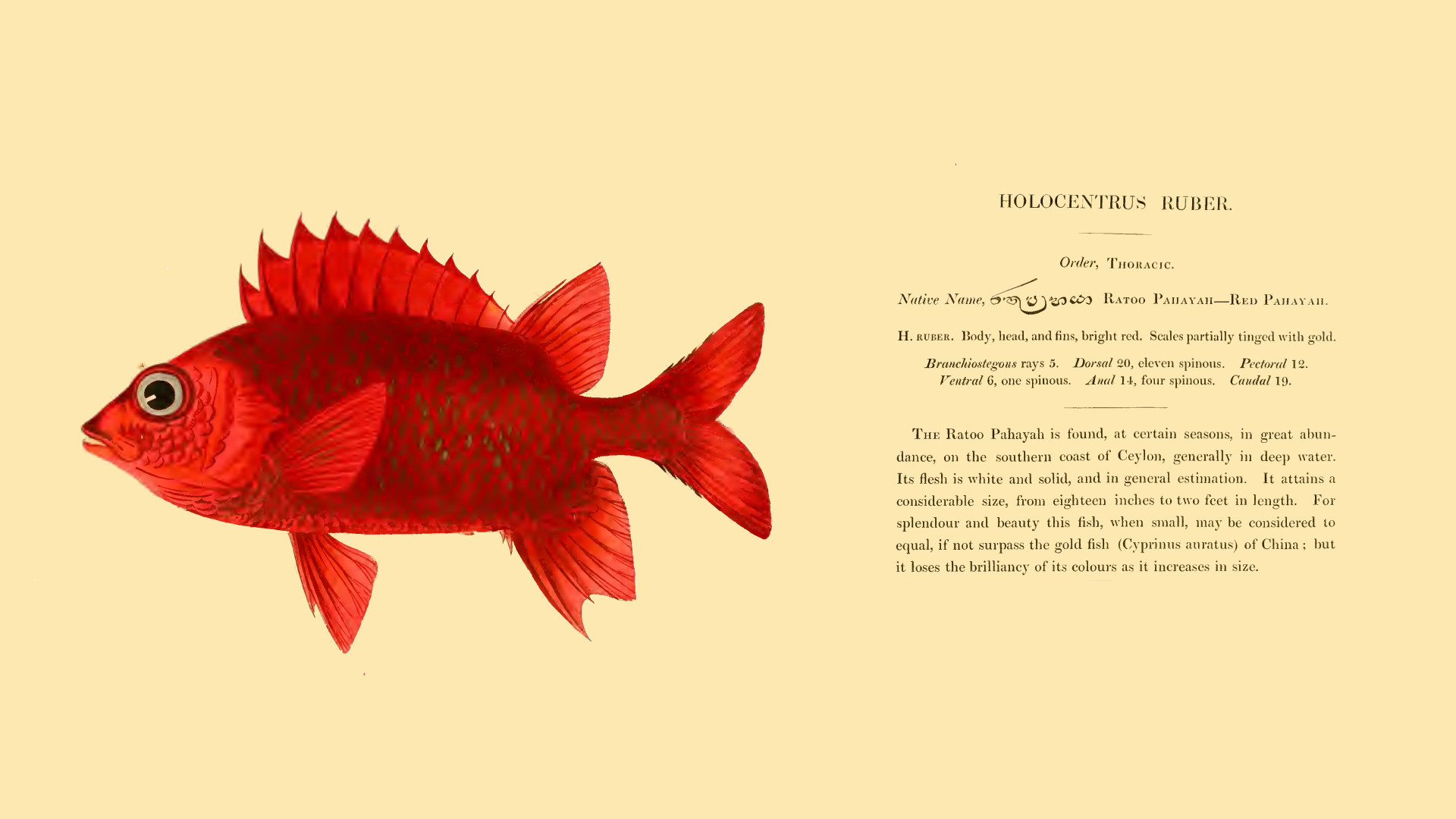 Redcoat Squirrelfish (Sargocentron rubrum), named by Forsskål. The characteristic silvery stripes along the sides are missing in this illustration. 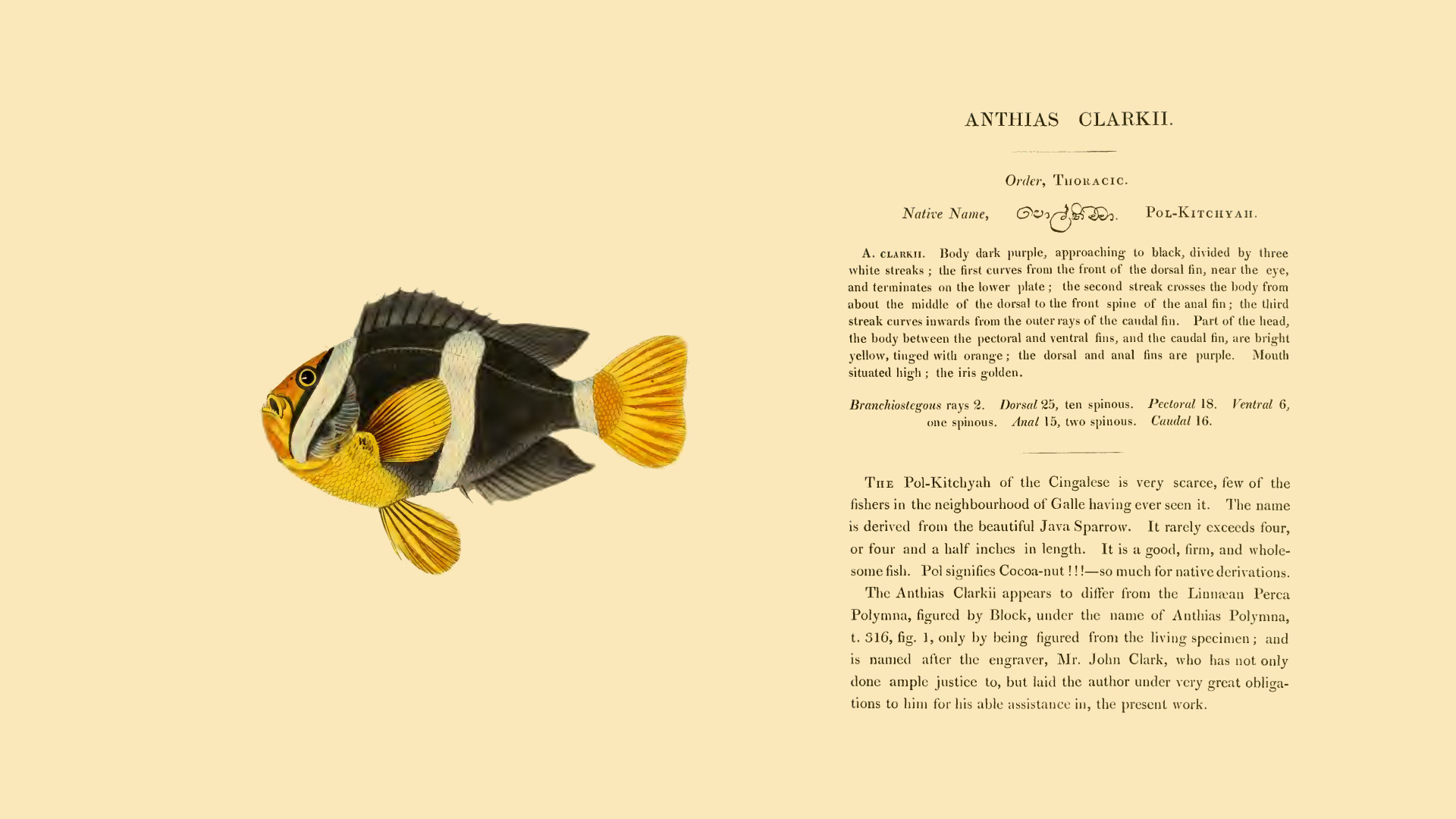 Possibly the most famous fish Bennett would describe, Clark’s Anemonefish (Amphiprion clarkii), named for the illustrator who produced these wonderful images, Mr. John Clark. Aside form his work on this project, there is little else recorded about this talented artist. Surely he must have produced other works?