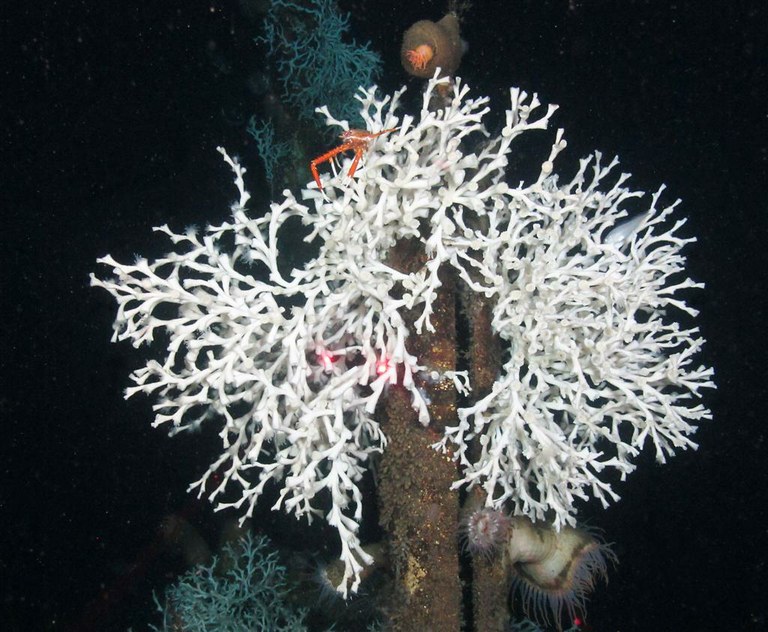 Two Lopehlia coral colonies growing on a small metal on a portion of the subsea completion structure in block Mississippi Canyon 355 at a depth of about 1,500 ft. Red laser beams, projected from the ROV, represent a separation of 10 centimeters (~4″).


The overall goal of the mission, which left Freeport, Texas, on July 14 and returned to Pensacola, Fla., on July 24, was to examine coral ecosystems and related habitats that developed over several decades on or near actively producing deep-ocean oil and gas production platforms. Undersea structures supporting energy production platforms provide some of the scarce hard surfaces in the Gulf where Lophelia pertusa, a deep cold-water coral that lives where there is no sunlight, can grow.

Scientists imaged corals in both high-definition video and still photography and also took samples for DNA sequencing to better understand the biology, growth and distribution of deep-sea corals. Through cameras on a remotely operated vehicle used to survey coral growth on oil and gas platforms, scientists observed Lophelia coral at a depth of 2620 feet (799 m) on undersea structures supporting the Ram Powell platform, which was built in 1997 and is one of the deepest platforms in the Gulf. The previous record depth for Lophelia in the Gulf was about 2066 feet (630 m). Scientists also visited four other deepwater platforms.

In addition to abundant Lophelia coral and anemones, numerous western roughy fish are seen living in the community (smaller cousins of the orange roughy, common in the deep Gulf of Mexico it only reaches 6 inches as opposed to 30 inches for the orange). This structure only rises about 30 feet above the bottom and does not go to the surface. Pipelines transported oil and gas to another platform several milesaway.

“Finding Lophelia at this depth was very exciting for the whole team, especially for those of us who have been studying coral habitat for decades,” said Gregory Boland, a biological oceanographer in the Bureau of Ocean Energy Management’s (BOEM) Environmental Studies Program who has overseen this and other coral studies. “Our findings complement previous joint research on coral ecosystems and will help policy-makers manage and protect ocean resources on the Outer Continental Shelf.”

The expedition included scientists and technicians from BOEM, the National Oceanic and Atmospheric Administration (NOAA) Office of Ocean Exploration and Research, and the U.S. Geological Survey (USGS) operating jointly under the National Oceanographic Partnership Program, which fosters the use of pooled federal resources such as funding, ships, equipment, and personnel to best meet agency and national priorities in ocean stewardship. Scientists from Temple, Pennsylvania State and Florida State universities were an integral part of the team.

For BOEM, the expedition was the culmination of a series of research missions taking place since 2002, when the bureau launched its first deepwater Lophelia coral studies in the Gulf. The new data will be incorporated into a final report BOEM plans to publish in 2013. The bureau plans to monitor deepwater corals periodically through other studies it will undertake in the region.

Large Lophelia colonies and numerous anemones on a portion of the subsea completion structure in block Mississippi Canyon 355 at a depth of about 1,500 ft. Red laser beams, projected from the ROV, represent a separation of 10 centimeters (about 4 inches). A western roughy is seen to the left of the structure. The structure was installed on the seabed in 1992 allowing a maximum possible period of 20 years for coral growth.

The cruise augments the ongoing USGS program Diversity Systematics and Connectivity of Vulnerable Reef Ecosystems (DISCOVRE), dedicated to the study of deep-sea coral environments in the Gulf and the Atlantic.

Photos, videos and logs from the expedition are posted on NOAA’s ocean exploration website under the heading of “Lophelia II 2012: Deepwater Platform Corals” at http://oceanexplorer.noaa.gov/. Data from the mission advance NOAA’s goals of exploring the ocean for the purpose of discovery and the advancement of knowledge.