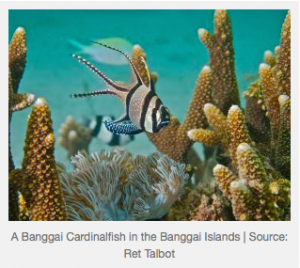 Popping up on our feed this afternoon came a word from Ret Talbot, “NMFS Proposes to List Banggai Cardinalfish under Endangered Species Act”.

You may recall back in March of 2014, the Bangaii Cardinalfish (Pterapogon kauderni) was inching its way closer to Endangered Species Listing after a “90-day-finding” by the NMFS (National Marine Fisheries Service) determined there was “substantial information” in a petition from June of 2013 to do so.

Tomorrow, after completion of their 12-month finding, the NMFS will be publishing a proposed rule to list six species, including the Bangaii, under the Endangered Species Act. Since none of the six species listed are found within U.S. jurisdiction, the NMFS will not be proposing a critical habitat designation. NMFS will be open to comments from the Federal Register for 60 days from the date of publication. You can read more about the proposal over at Ret’s “Good Catch Blog” and keep an eye out for his in-depth article on the topic in CORAL magazine tomorrow.