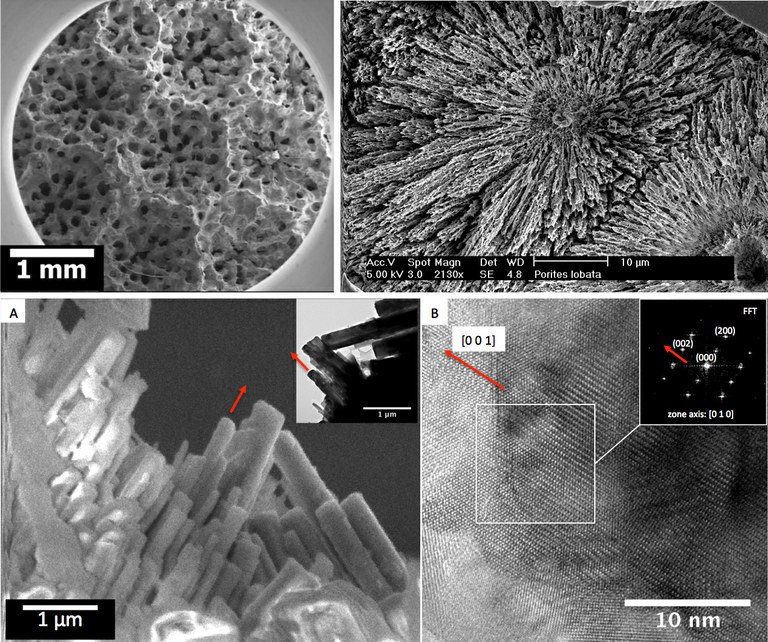 
From the University of York

Their investigations, carried out at the nanoscale, provide valuable new information for scientists and environmentalists working to protect and conserve coral from the threats of acidification and rising water temperatures.

As corals grow, they produce limestone – calcium carbonate – skeletons which build up over time into vast reefs. The skeleton’s role is to help the living biofilm to move towards the light and nutrients.

Understanding the calcification mechanism by which these skeletons are formed is becoming increasingly important due to the potential impact of climate change on this process.

The scientists looked at the smallest building blocks that can be identified – a microstructure called sphemlites – by making a thin cross-section less than 100 nanometres in thickness of a skeleton crystal. They then used Transmission Electron Microscopy (TEM) to analyse the crystals in minute detail.

These different regions could be directly correlated to times of the day – at sunset, granular and porous crystals are formed, but as night falls, the calcification process slows down and there is a switch to long aligned needles.

Corresponding author Renée van de Locht, a final-year PhD student with the Department of Physics at the University of York, says, “Coral plays a vital role in a variety of eco-systems and supports around 25 per cent of all marine species. In addition, it protects coastlines from wave erosion and plays a key role in the fisheries and tourism industries. However, the fundamental principles of coral’s skeleton formation are still not fully understood.

“It has been suspected for some time that the contrast bands seen in crystals in optical images were daily bands. Through our research we have been able to show what the crystals actually contain and the differences between day and night crystals.”

The research was funded by the Engineering and Physical Sciences Research Council (EPSRC) and the University of York, and concentrated on three species of tropical, reef-building coral – Porites lobata, Siderastrea sidereal, Montastrea annularis.

Lead investigator Dr Roland Kröger says, “Although we knew there was a difference between day and night crystals, we’ve actually been able to see the evolution from granular to aligned needles and to find out much more information about the phase, orientation and size of the aragonite crystals.”

The York researchers are now turning their attention to looking directly at the affects of acidification. Their latest research studies five-day old coral larvae and compares a population from a normal sea water environment with another in an acidic environment.

The aim is to investigate the nanoscale impacts of the different environments at early growth stage to assess how these could affect the whole colony and the bigger reef.

The coral research at York is also part of a larger project looking at the hard and soft matter interface called the MIB – Interface between Materials and Biology – project. Nature has created materials that combine mineral (hard) and organic (soft) components in a way that provides properties that are extremely well suited to function – for example in bone, egg or mollusc shells. The collaborative project aims to develop a working understanding of how this control is worked out in natural systems, so that the same techniques can be used to develop new materials with specially tailored properties.