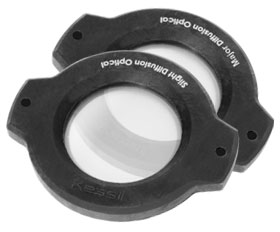 Recently Kessil announced its new Optical Kits; they help further enhance the AP700’s color mixing while reducing shading and scattering the light at a wider angle. The diffusers allow the user to subdue the shimmer, or “disco effect”, as it’s sometimes called. Kessil claims the Optical Kits are great for acclimating new corals to the Kessil LED lighting, and that no tools are required to attach the kits because they magnetically attach to the fixtures. These graphs show the spread and intensity of the light produced by the AP700 with and without the Optical Kits attached. With an Optical Kit installed, the hotspots are less intense, reducing the likelihood of coral bleaching. MORE