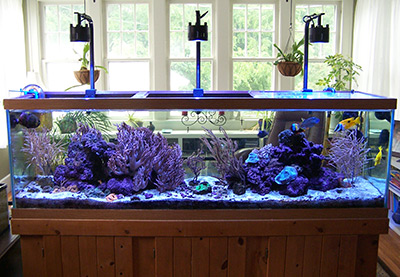 LED lighting is the latest addition to my reef aquarium

Regular Saltwater Smarts visitors may recall that back in the spring of 2015, I closed down my 75-gallon reef tank and converted my 125-gallon (then) FOWLR tank to a reef system with the addition of some invertebrate livestock from the 75 and a Current USA metal halide/T5 combo light fixture donated by Caribbean Chris. Fast-forward to May of this year, and it was time to consider new lights. I was really pleased with the look of the lighting that the Current USA fixture produced. However, it did have a few drawbacks.

For one, it was really heavy and required two people to remove for water changes and other tank maintenance. Also, the rather flimsy support legs used to mount the fixture on the tank weren’t really up to the task and broke quite easily. (Suspending the fixture from the ceiling was not an option and, according to my wife, could cost me my life.) Another issue was that the fixture—which, though new for me, was actually rather old by most people’s standards when I got it—was getting a bit buggy, with the switches failing one by one and some of the T5s working intermittently. Last but not least, running all those lamps and the fan to cool them was adding a considerable sum to our electric bill each month. MORE