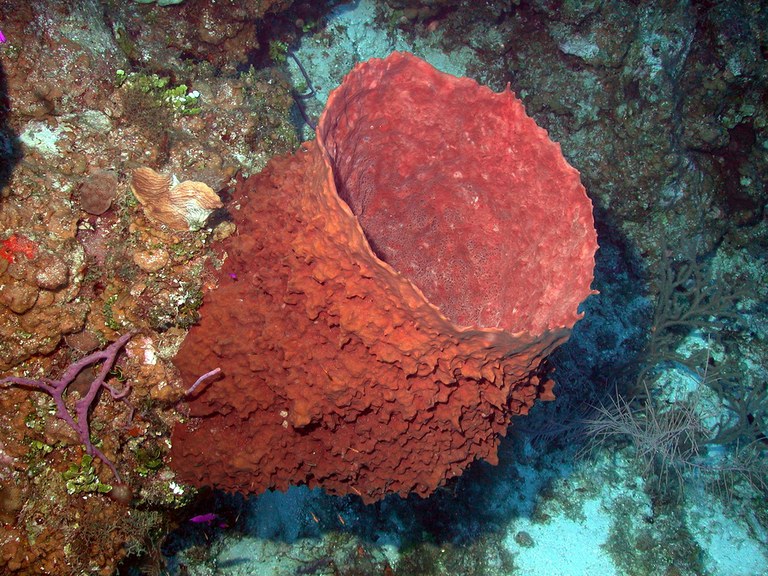 Xestospongia muta, the barrel sponge, may live for 100 years and grow to over 6 feet tall. Photo by NOAA Photo Library / Flickr.


Earlier this year I blogged about an unknown disease named Small Orange Band Disease that was severely affecting red and orange barrel sponges up and down the Florida coast. This disease began roughly in April 2012 and started out as a yellowing / bleaching of the sponge followed by complete sponge disintegration at the final stages of progression.  At the time researchers neither knew its origin nor how it was progressing and at this point, neither one of these questions are answered.

Due to the economic recession, government funding for this project was not available so Jose Lopez, PhD turned to Kickstarter to obtain funding for research into small orange band disease.

Dr. Lopez stated that Reef Rescue documented a 15-20% infection and subsequent die-off rate in Florida barrel sponges before the symptoms subsided and disappeared later this year.  During the time the disease was prevalent, he and others obtained healthy and diseased samples which were then frozen and stored for later analysis.

His plan is to have the Marine Microbiology and Genetics Laboratory in the brand new Center of Excellence for Coral Reef Ecosystems Sciences of Nova Southeastern University (NSU), in Dania Beach Florida, perform the needed testing to uncover the answer.

According to the Kickstarter page, 100% of the proceeds from the campaign will go toward the project. They will “apply the latest high tech ‘next generation’ DNA sequencing methods to characterize the microbial diversity…associated with healthy and disease Xestospongia muta sponges [and] … evaluate the effects of the disease on host physiology.”  Dr Lopez also plans to work closely with other state and local groups that might encounter this disease in the future.

Watch the below video to learn more about the unknown sponge disease:

Thank you to Kevin Erickson, MASNA Vice President, for bringing this Kickstarter project to our attention.