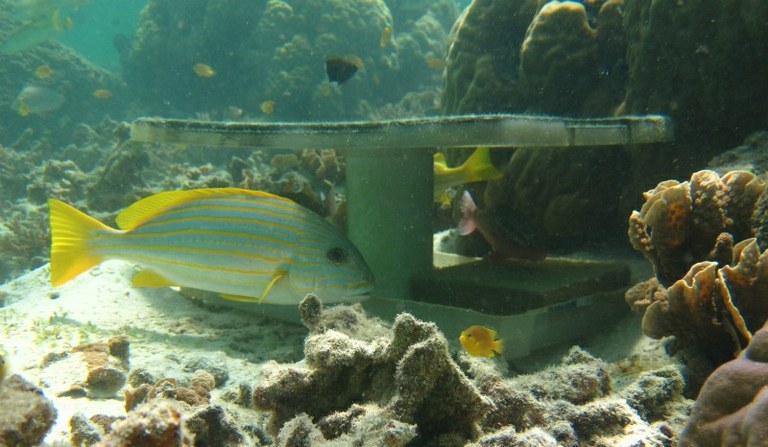 One of the structures built by the researchers in this study. A sweetlip takes advantage of the shade.


According to research published this week in Coral Reefs by Kerry and Bellwood, large reef fish (snappers, coral trout, sweetlips, etc.) favor very specific habitats on coral reefs and that these preferences could have dire consequences on the fish as climate change takes place.

Coral trout under an artificial overhang.

What these researchers did was to setup 17 video cameras around Lizard Island in North Queensland to record first-hand where these particular fish spent a lot of their time. They evaluated massive corals (bommies), branching corals, and tabling corals and monitored where the fish were located based on the coral cover morphology.

They found that all of the fish very much preferred tabling corals over all of the other structures in the area. This preference could have some serious consequences given that tabling corals are found to be much more susceptible to climate change compared to other coral.

“Like human beings, fish have strong preferences on where they like to hang out — and it appears that they much prefer to shelter under overhanging tablecorals. This tells us quite a bit about how important these corals are to the overall structure of the reef and the large reef fish that live there,” says James. “The reason for the fishes’ preference is not yet clear — but possibilities include hiding from predators such as sharks, shading themselves from ultraviolet sunlight, or lying in ambush for prey.” … “If they die back as a result of bleaching or disease, or are destroyed by storm surges, this would strip the reef of one of its main attractions, from a coral trout’s viewpoint.”

Kerry and Bellwood also wanted to learn what specifically these fish liked about tabling corals so they built a number of different structures to investigate these preferences. One type of structure had no roof. Another type had a transparent roof. The final type had a roof that was painted black. By far the fish preferred the black roof structure.

Based on this observation, they believe that the data suggests that the fish are using the structures to hide from larger predators like sharks, use them as ambush locations, or prefer to stay out of the direct sunlight.