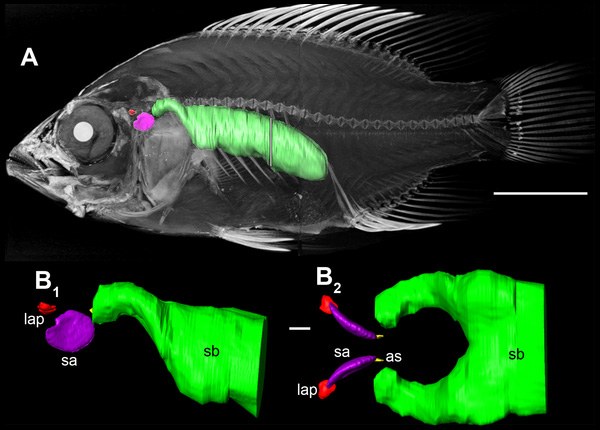 
Compare the size and location of P.polleni’s swim bladder (above) to the small, distant swim bladder of the bottom-dwelling cichlid, S.tinant (below).  P.polleini’s larger swim bladder does more than help its buoyancy;  P.polleini is also the better listener.

Researchers Tanja Schulz-Mirbach, Brian Metscher, and Friedrich Ladich from the University of Vienna compared four morphologically diverse species of Asian and African cichlids to study the correlation between the morphology of their swim bladders and their auditory abilities.   The research affirms the few other previous studies about this subject – that fish with larger swim bladders hear better.

The paper’s abstract is shared below.  Read the full open-access article published in PLoS ONE.

Several teleost species have evolved anterior extensions of the swim bladder which come close to or directly contact the inner ears. A few comparative studies have shown that these morphological specializations may enhance hearing abilities. This study investigates the diversity of swim bladder morphology in four Asian and African cichlid species and analyzes how this diversity affects their hearing sensitivity.

We studied swim bladder morphology by dissections and by making 3D reconstructions from high-resolution microCT scans. The auditory sensitivity was determined in terms of sound pressure levels (SPL) and particle acceleration levels (PAL) using the auditory evoked potential (AEP) recording technique. The swim bladders in Hemichromis guttatus and Steatocranus tinanti lacked anterior extensions and the swim bladder was considerably small in the latter species. In contrast, Paratilapia polleni and especially Etroplus maculatus possessed anterior extensions bringing the swim bladder close to the inner ears. All species were able to detect frequencies up to 3 kHz (SPL) except S. tinanti which only responded to frequencies up to 0.7 kHz. P. polleni and E. maculatus showed significantly higher auditory sensitivities at 0.5 and 1 kHz than the two species lacking anterior swim bladder extensions. The highest auditory sensitivities were found in E. maculatus, which possessed the most intimate swim bladder-inner ear relationship (maximum sensitivity 66 dB re 1 µPa at 0.5 kHz).

Our results indicate that anterior swim bladder extensions seem to improve mean absolute auditory sensitivities by 21–42 dB (SPLs) and 21–36 dB (PALs) between 0.5 and 1 kHz. Besides anterior extensions, the size of the swim bladder appears to be an important factor for extending the detectable frequency range (up to 3 kHz).