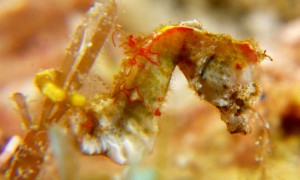 Since I had somewhat depressing news earlier about the Spiny Seahorse, let’s take a happier route this time around. These cute little seahorses, Hippocampus pontohi and Hippocampus severnsi, were captured on camera by two divers in the Philippines, where they’ve never been seen before in the country’s seas. The Weedy Pygmi Seahorse (H. pontohi) and the Severn’s Pygmy Seahorse (H. severnsi)  were spotted near the Island of Romblon, one of the provinces that surround the Verde Island Passages. There’s now a total of 11 known seahorse species inhabiting the waters of the Philippines. Previously only known to swim gleefully around Indonesian waters, it’s one of the smallest pygmy seahorses, reaching a height of a slight 1.3 centimeters. That’s TINY! Let’s take a note from my last blog and be a little more careful with the reefs they populate, I’d like these little guys to stick around for a while!

Research assistant at Project Seahorse, Riley Pollom says: “Millions of seahorses are caught and traded dead and alive all over the world. They are mysterious creatures and poorly understood, but through iSeahorse we hope to harness the collective knowledge of citizen scientists to learn more

about them and develop appropriate conservation protections.

“To date, more than 500 sightings have been submitted from all over the world and they will contribute towards ensuring seahorses remain a permanent feature of our coastal waters.”

Those are some promising numbers. I hope they continue to thrive within their environment. 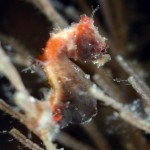