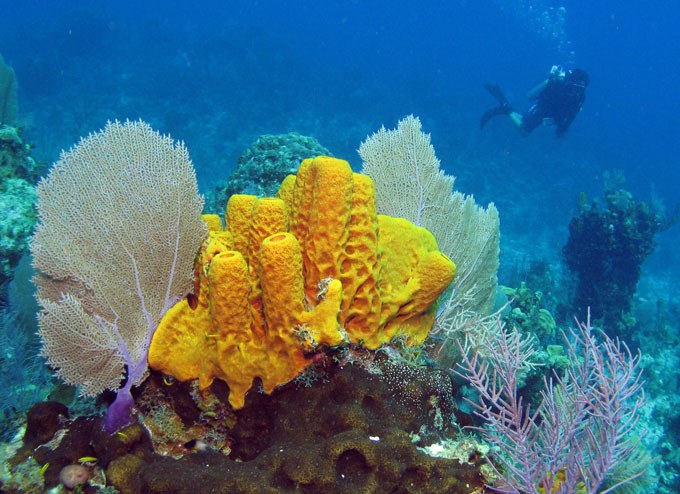 
Using the undersea habitat Aquarius–moored on Conch Reef off Key Largo, Florida–marine scientist Joseph Pawlik of the University of North Carolina Wilmington (UNCW) and colleagues found that these predator-fish are the same brightly colored angelfish and parrotfish that attract scuba divers and glass-bottom boat tourists.

Pawlik is first author of the PLOS ONE paper; co-authors, all from UNCW, are Tse-Lynn Loh, Steven McMurray and Christopher Finelli.

Chemical warfare beneath the waves

The fish prey on sponges without chemical defenses–sponges missing what might be called the “yuk factor.”

“Sponges that manufacture metabolites that are distasteful to fish are largely left alone,” says Pawlik.

“That being said, when overfishing by humans removes these predatory fish, reefs shift toward faster-growing sponges that can out-compete reef corals for space.

Coral cover on Caribbean reefs is at historic lows due to disease, heat stress from warming waters and waves from storms.

“Coral reefs, especially in the Caribbean, have undergone many changes in the past few decades,” says David Garrison, program director in the National Science Foundation’s (NSF) Division of Ocean Sciences, which funded the research.

“With the decline of reef-building corals, sponges are becoming the main organisms on many reefs. These findings provide important information about interactions between sponges and predatory fish in coral reef communities.”

Previous research showed that Caribbean sponge communities were primarily structured by the availability of plankton, or tiny floating plants and animals, rather than by predators.

But sponge growth experiments performed by Pawlik and colleagues–research that used cages to exclude predators–show the opposite.

That has implications for fisheries management throughout the Caribbean.

“Some coral species are listed as critically endangered on the IUCN [International Union for Conservation of Nature] Red List, with four reef-building corals on the top ten list for risk of extinction.”

Hence, he believes, Caribbean reefs of the future are likely to be made up increasingly of sponges.

Scuba divers and glass-bottom boat tourists may visit not to view coral reefs, but to see the new game in town: the sponges.