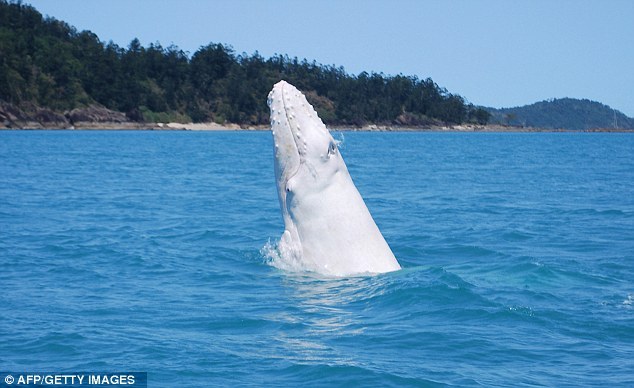 Mini Migaloo jumping at the surface.

Migaloo is supposedly the world’s only albino humpback whale in existence and was first observed on June 28, 1991 at Byron Bay, Australia. Based on his length, whale researchers placed him at 3-5 years of age at that time, making Migaloo roughly 25 years old today (humpback whales typically live 45-50 years).  He is so special, in fact, that Queensland has legislation in place requiring boats to stay at least 1,600 feet away at all times and aircraft can not approach any closer than 2,000 feet. To do so would cost you $16,000 in fines (yikes!).

It turns out that recently another juvenile white humpback whale has been spotted alongside his normally-colored mom. The juvenile is a true albino: it has white skin, pink eyes, and the inside of his mouth is also pink and can be seen in the photo to the right. This calf could be the offspring of Migaloo Sr, but only a DNA test will conclusively prove or disprove his parentage.

National Parks marine fauna coordinator Geoff Ross said the young whale appeared to be truly “amelanistic” or albino, which while extremely rare, could happen spontaneously and so he or she may not be related to Migaloo.

Hopefully in the near when the albino calf is much older, a small tissue sample can be taken for DNA analysis.  In the mean time, take a minute to watch the video about Migaloo: