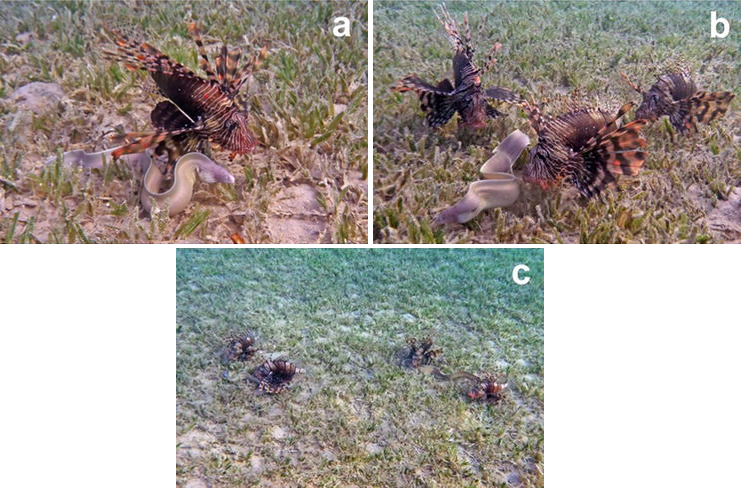 
This new association is reported in the journal Coral Reefs by researchers Malik Naumann and Christian Wild, both from Bremen, Germany.

In their report, Naumann and Wild describe the association between the two marine organisms as observed between March 1-6, 2013 in the Gulf of Aqaba, Red Sea, close to Dahab, Egypt.  As mentioned previously, the association between the lionfish Pterois volitans and the moray eel Gymnothorax griseus was seen in shallow seagrass beds in the afternoon where the two organisms hunted prey. The association was initiated when lionfish spotted moray eels hunting among seagrass leaves.  The lionfish would swim down and follow the eels in close proximity as they foraged for food and during this association, the lionfish would display their species-specific hunting posture (i.e., lowered head, flared pectoral fins). These associations typically lasted for at least an hour at a time and during this time, the eels would either hunt or rest while the lionfish scavenged on startled prey or remained on alert.  The researchers point out that the potential specific benefits to each species still needs investigated.

During the extended dives, Naumann and Wild captured some video of the mutualistic foraging: