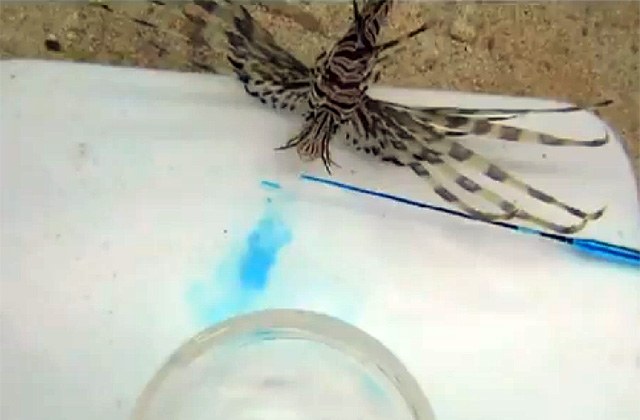 
The Indo-Pacific Lionfish (Pterois volitans) is an invasive species to Atlantic waters.  They are reproducing at alarming rates since these aliens were first spotted in the late 1980s wrecking havoc on Caribbean ecosystems.  If there is a silver lining to their bio-invasion, it’s the increased research on P.volitans, which have discovered some remarkable behavior never before documented.

Researchers from Oregon State University and SUNY found lionfish blow pulses of water when stalking prey such as gobies, with an average of 18.5 pulses before finally striking their prey. The jet stream can reach a maximum distance of 9.6cm (3.8 inches) with a velocity of 20.4 cm s-1.

Lionfish may do this for two primary reasons.  The first is to disorient the prey fish by overwhelming their lateral line sensory system, and the second may be to increase the likelihood of head-first capture/swallowing because fish have a natural tendency to swim against water current.  Head-first strikes are advantageous to predators because prey fish are less capable of escape (i.e. swim backwards) or exploit their defensive mechanisms (e.g. spines on their fins).

The researchers also theorize this water jet technique may partially explain why lionfish have done so well in the Atlantic.  Prey fish in the Atlantic may not have evolved effective behavioral and psychological responses to this strange and unique attack.

[via The Blaze via AquaNerd]