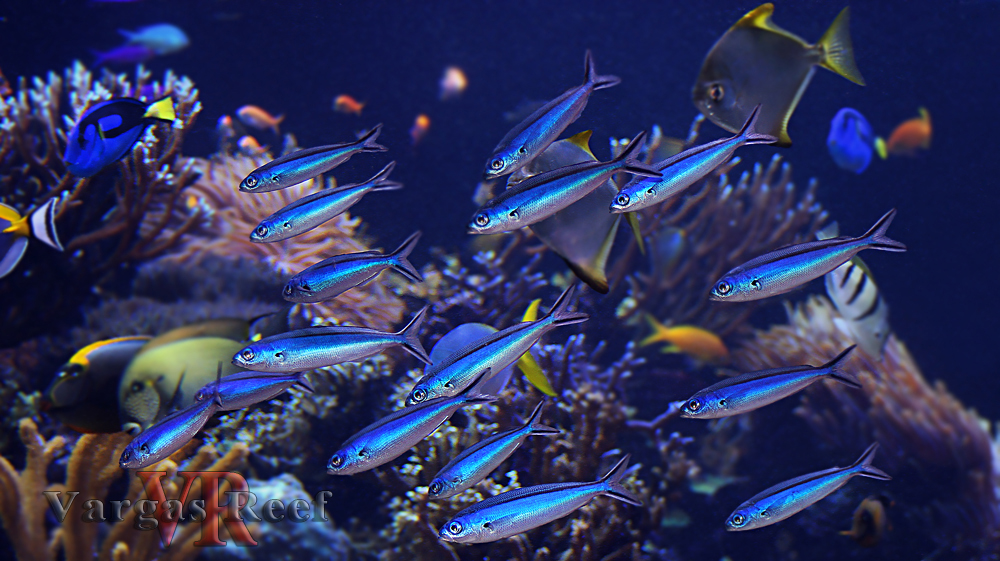 Remarkable achievements can be measured by accomplishing a certain task or by applying special efforts through time. In 1999 the Long Island Aquarium (LIA)—then known as Atlantis Marine World—was co-founded by one of the most talented aquarists in the business, Curator Joe Yaiullo.  Joe’s goals were to create the most recognized and admired aquarium in the country, but since this is a reef forum I will focus on his accomplishments with reef related topics. Back to my opening line, in the short number of years since opening its doors to the public this aquarium has enjoyed remarkable achievements because of its curator and the pioneering mentality of its staff. 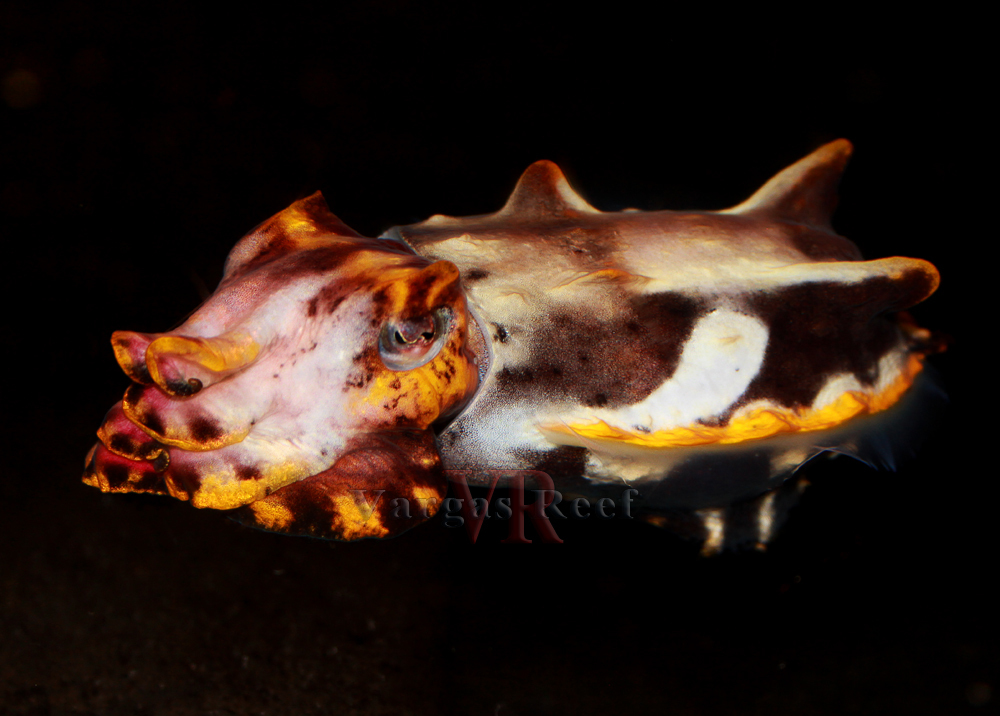 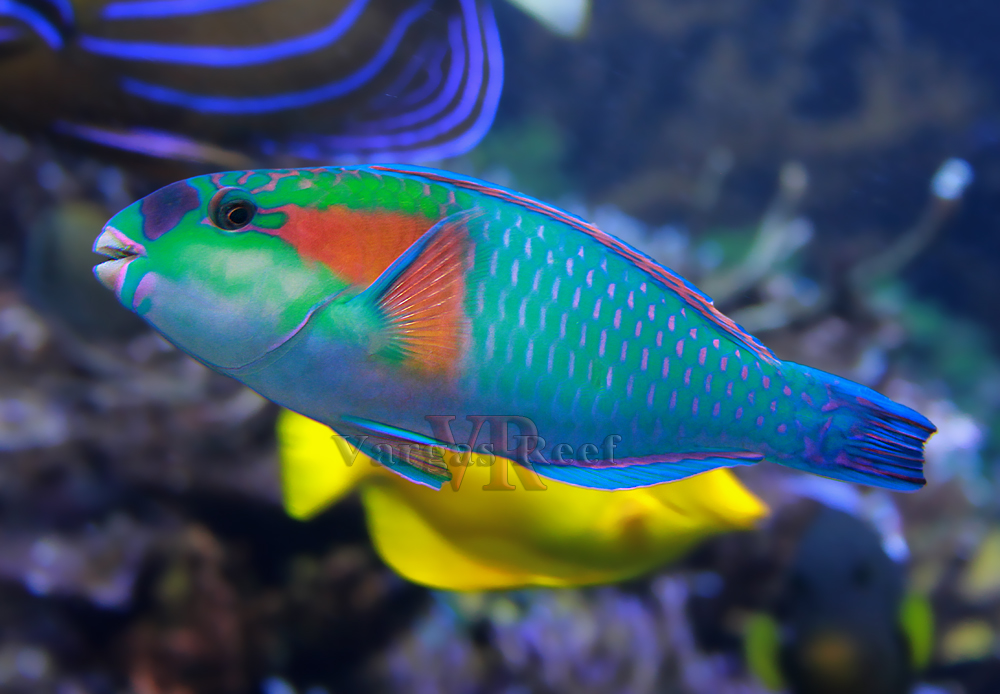 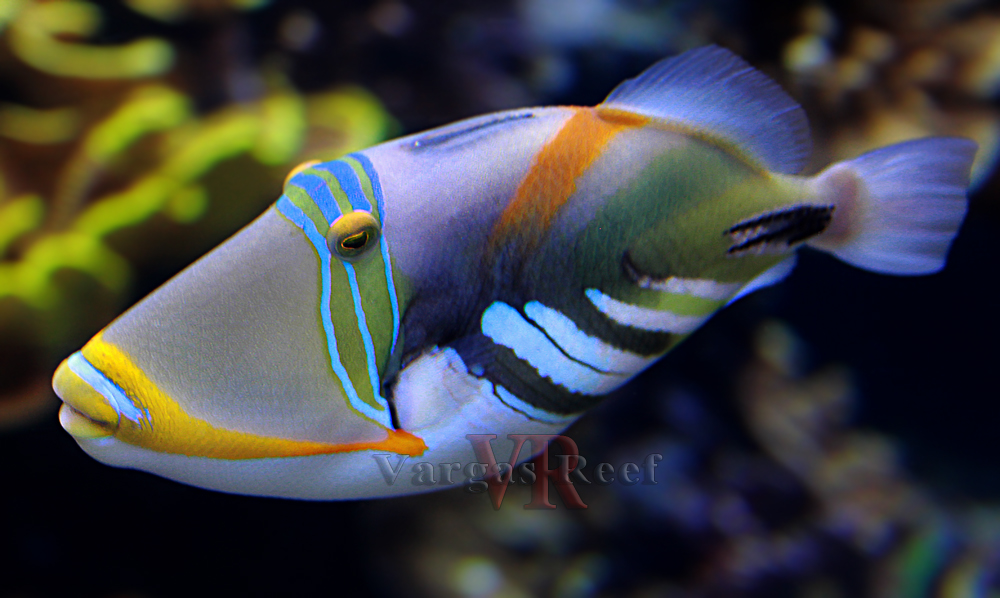 I have visited this aquarium every year since it opened. With every visit I document its extraordinary progress with photos. This year during the North East Reef Aquarium Conference (NERAC) I was once again given a tour behind the scenes by Joe and a special tour by Todd Gardner. The tour with Joe was also enjoyed by the organizers of DFW-MACNA, Drew Richardson and Marc Levenson. Marc was given the opportunity to feed the fish pellet food while sitting on one of the walk ways above the 20,000-gallon reef aquarium. 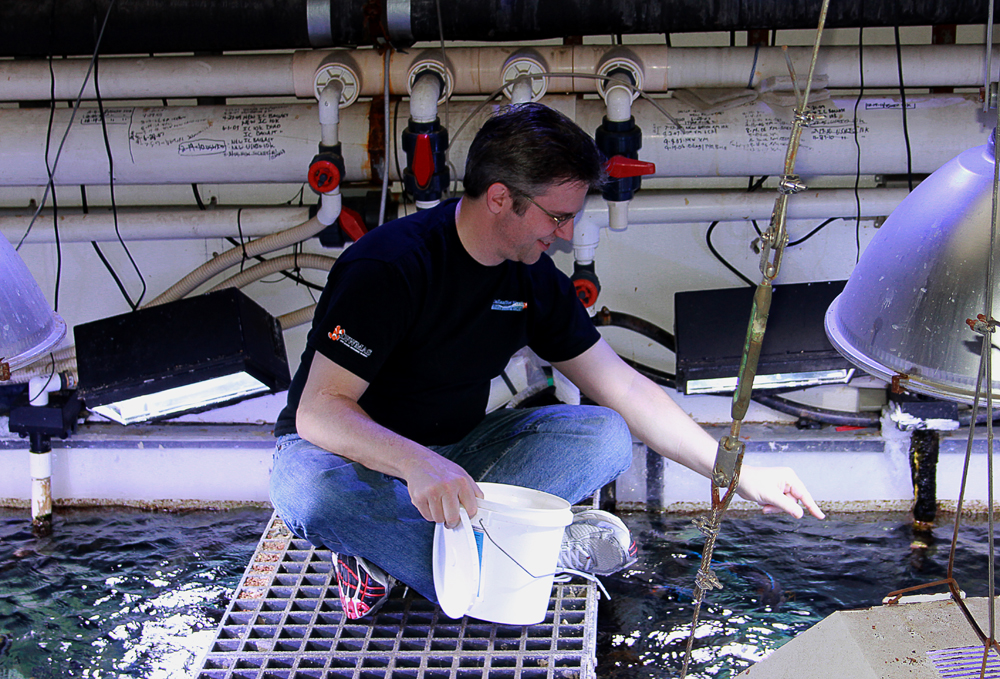 Marc Levenson feeds the fish from above the 20,000-gallon tank.

For those who did not attend NERAC, you missed the best reef hobbyist event in the Northeast!  It was held at the brand new Long Island Aquarium Exhibition Center. The Seastar ballroom was divided in two—half the room was enjoyed by the vendors and the other half was designated as a lecture hall with linen covered round tables for the attendees.  There were many vendors on hand, either selling or talking about their products.  Many coral frag vendors made an appearance as well; it seems like everyone in attendance left with goodies they purchased (coral frags and/or fish). Every vendor I spoke with had a great time and said they will be back next year with more products. The event also signed three national speakers (Julian Sprung, Sanjay Joshi, and I) and one speaker from Belgium (Peter Schmiedel).  The speaker’s hall was filled with attendees absorbing useful tips from the speakers lecture. The attendees were allowed to ask questions during the talk, while others waited for the speakers to complete their presentations.  Each speaker allowed interactive dialog with a few jokes here and there. The banquet was held in front of the 20,000-gallon reef aquarium and as the night drew to a close attendees were given the opportunity to witness many of the fish spawning above the reef. When all of the lights above the reef tank were completely shut down, Flashlight fish Anomalops katoptron and their bio-luminescence glow were seen darting around in complete darkness. 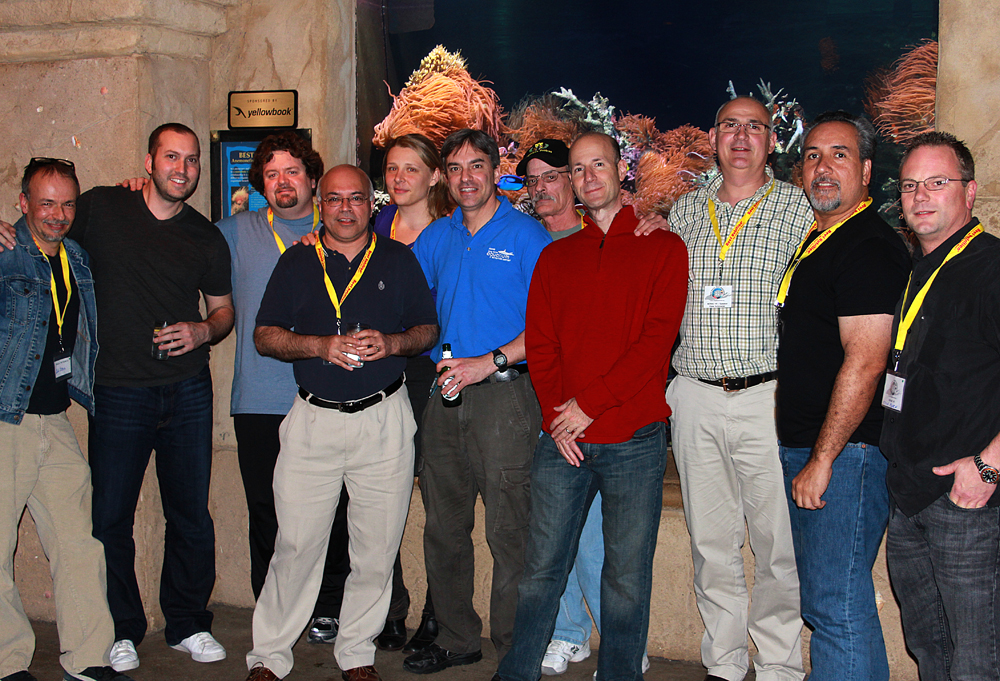 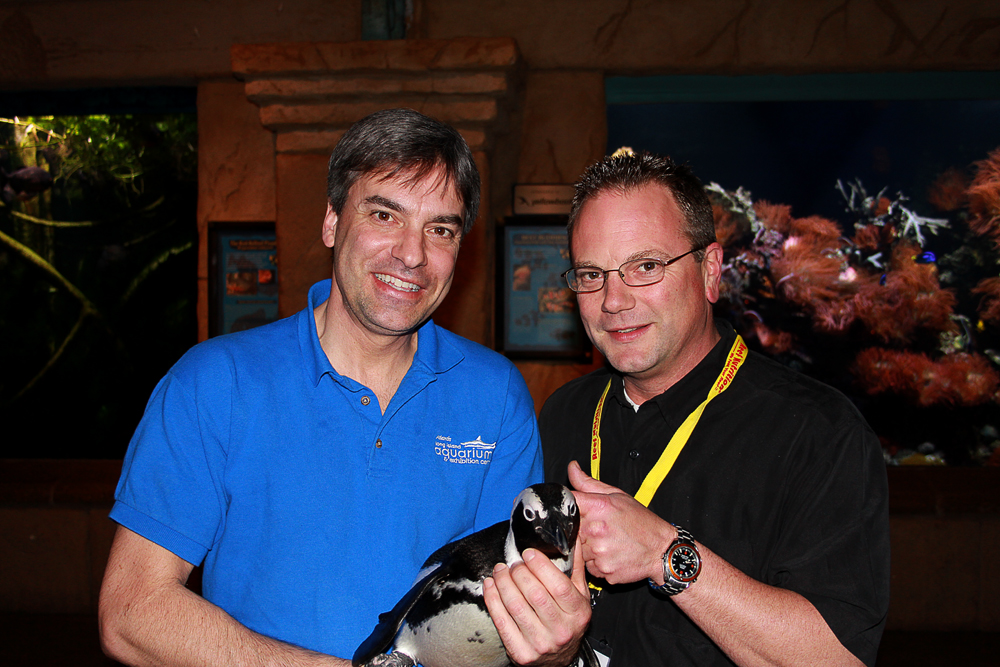 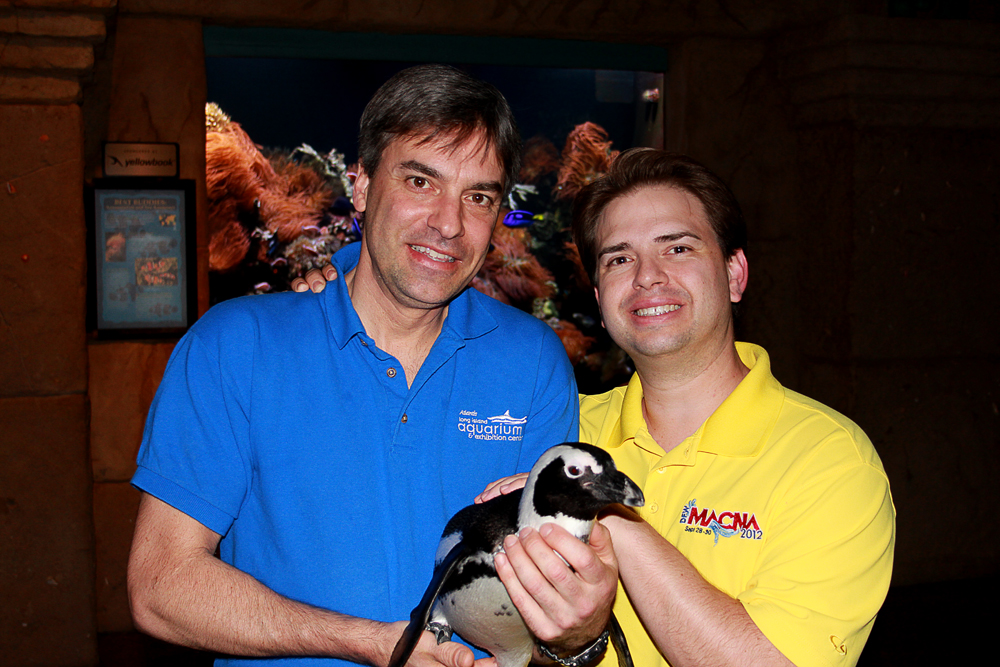 LIA’s 20,000-gallon reef aquarium is the oldest reef tank of its size and it has the largest collection of captive grown corals in the world.  It is often touted by many as one of the best or the most successful large reef aquarium in the world.  Most public aquariums with great looking reef tanks adjacent to the ocean often operate on what’s titled as an open system. An interesting fact about this reef system, it operates on a closed system. Let me explain, some public aquariums run an open line of sea water from the ocean through their reef system providing them with a constant water change (open system). We as reef aquarists often hear about “old tank syndrome” and I’m a firm believer that it’s just a matter of maintenance issues. For the number of years this aquarium has been in operation it has never suffered from “old tank syndrome”, this is because of the stringent maintenance schedule created by LIA. 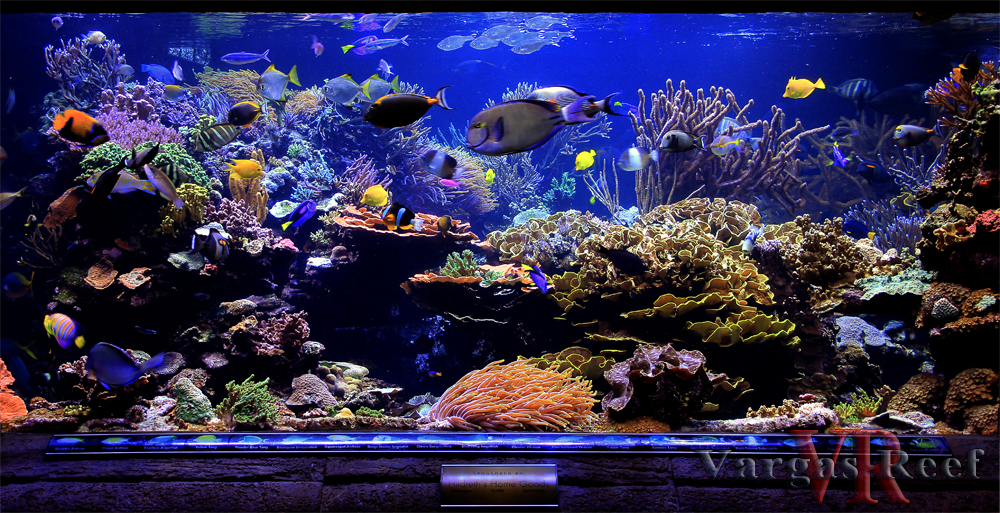 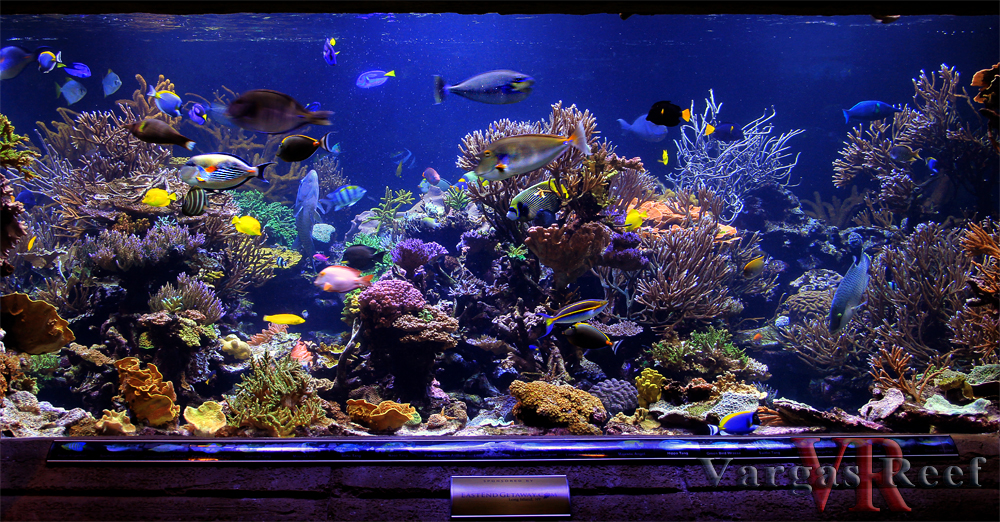 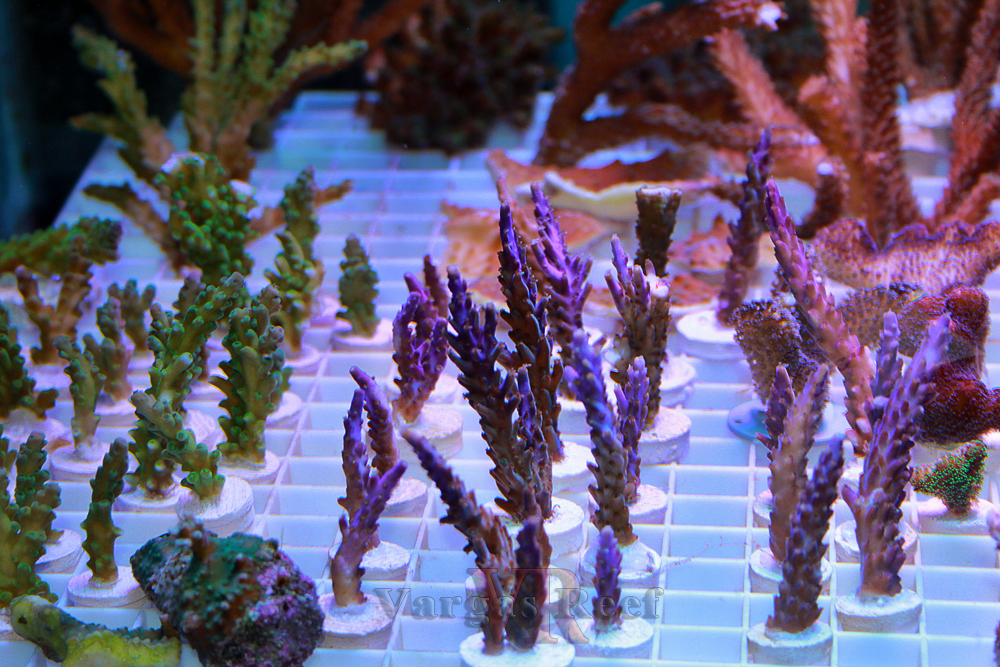 I would have to say that of all the extraordinary achievements accomplished by LIA—the one with significant impact to the hobby would have to revolve around Todd Gardner’s breeding program. Last year Todd was very successful in rearing Liopropoma rubre, better known as the Swissguard Basslet. Now he has taken it to the next level and is working on the holy grail of basslets, the Liopropoma carmabi.  Todd has a 100-day carmabi basslet swimming in one of his large rearing vats feeding on cultured copepods. It should be noted that Todd works very hard at achieving these great success stories and is broken-hearted when any of these tiny little fish don’t make it through their larval stage and proceed through metamorphosis becoming juvenile fish.  An example of this was his reaction to the loss of a small unidentified fish larval he rescued from their main system. His disappointment to this loss was very evident in his reaction.  Luckily, his challenge in identifying this tiny little creature hopefully will come with great news in the future as he has another of its kind feeding in another large rearing vat. Congratulation goes out to Todd for his dedication to this breeding program established at LIA. 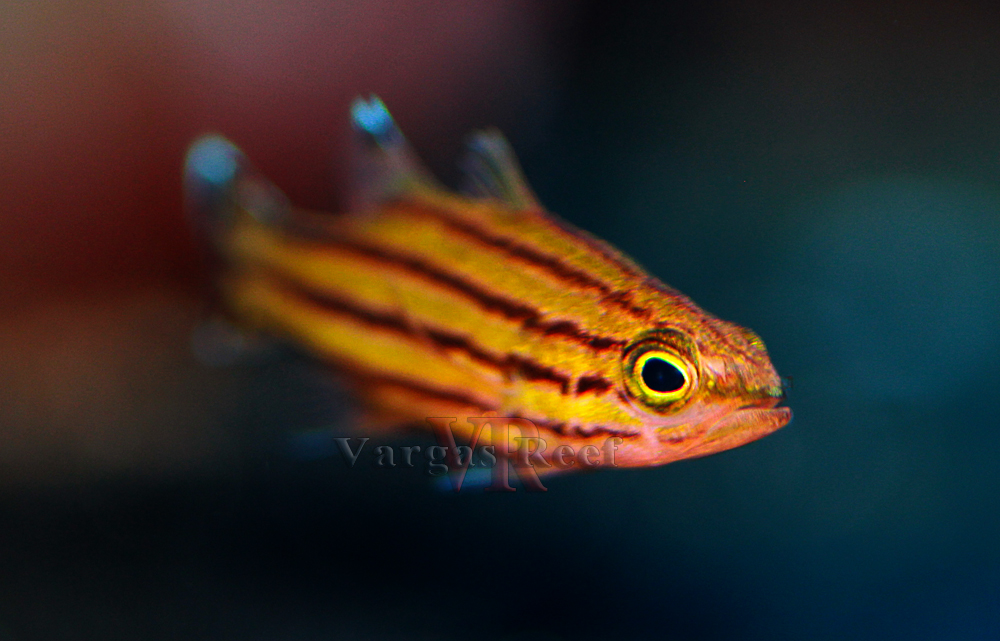 This is one of the first Swissguard babies. 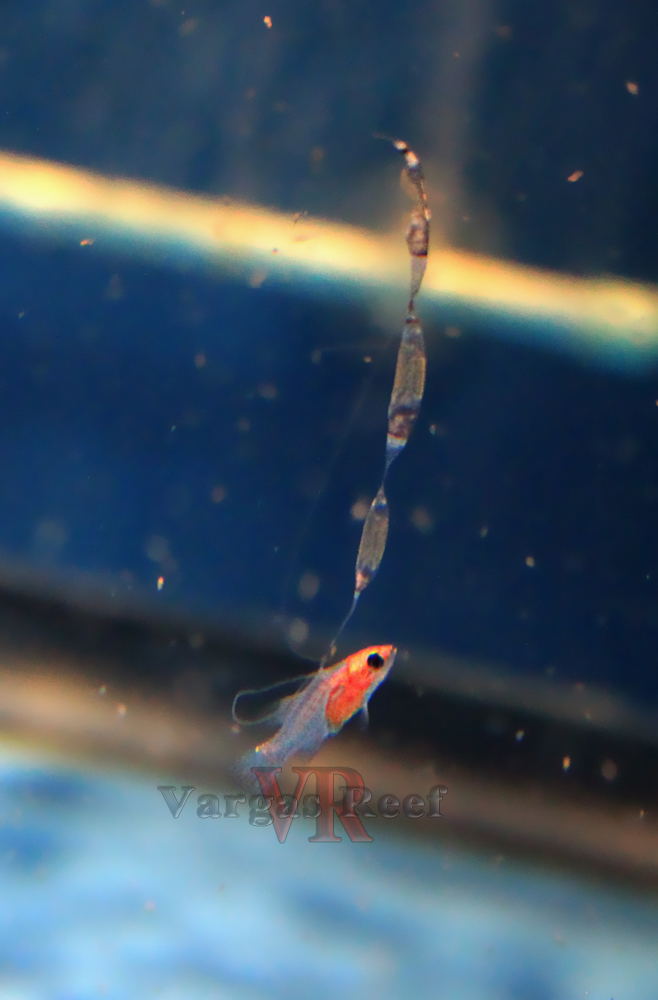 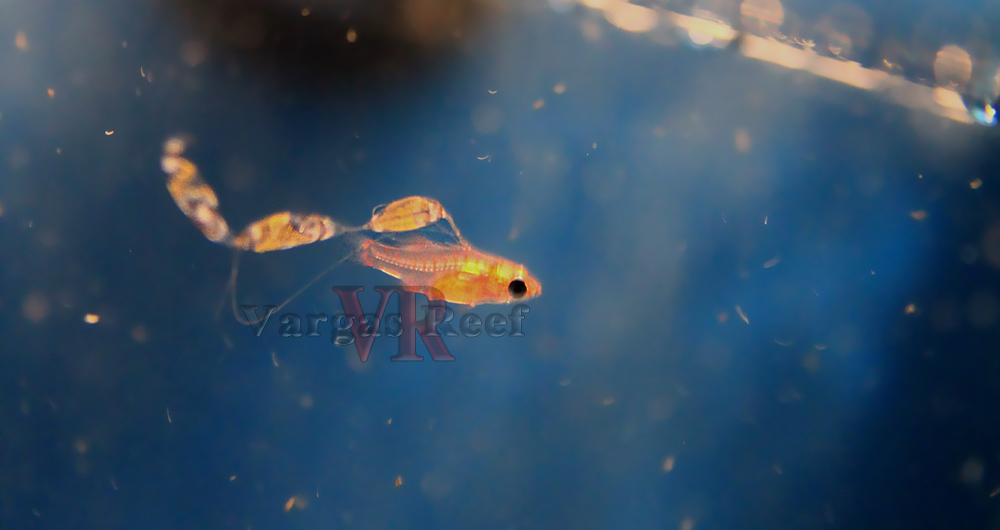 Another shot of the 100-day old Carmabi. 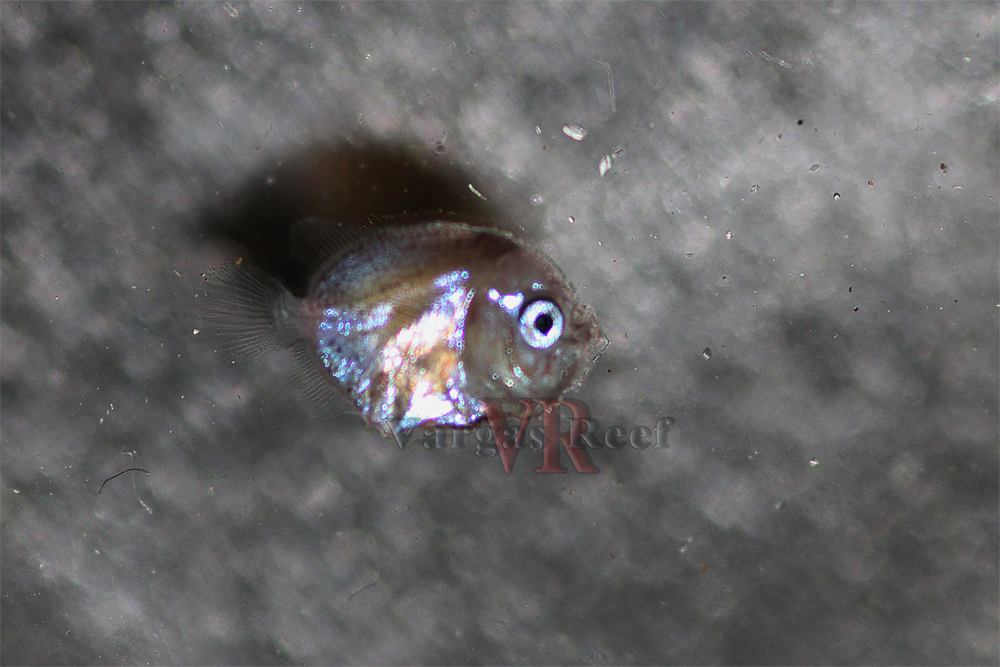 I would speculate that its an angelfish?

For those that have yet to visit LIA, you must put it on your “To Do” list.  This is a wonderful aquarium with many talented people at the helm. Or, you can simply wait till next year’s NERAC, see wonderful speakers and at the same time enjoy that wonderful 20,000-gallon reef aquarium.  And, if you ask nicely, Joe may give you a tour behind the scenes.