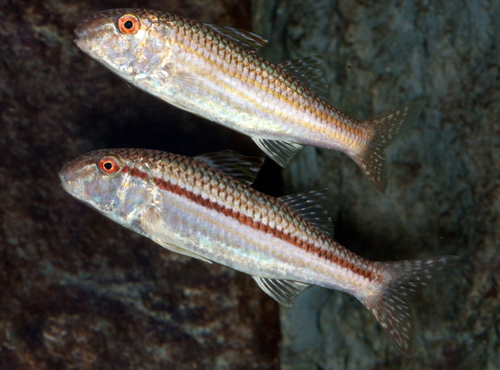 A pair of red goatfish, Mullus auratus at the Long Island Aquarium

Divers and fish collectors in Long Island waters commonly encounter two species of goatfish: the red goatfish, Mullus auratus, and the spotted goatfish, Pseudupeneus maculatus.  Although they are similar in outward appearance, their behavior and adaptability to aquarium life varies significantly.  As with most species, these differences are, in part, a reflection of ecological differences that can be observed in the wild.

The red goatfish makes its first appearance in June, when the water is still uncomfortably cold for most SCUBA divers, and many of the familiar tropical species are still at least a month away from settling here. They can be seined up in eelgrass beds, often in schools of 10 or more.  As the season progresses and they put on size, they begin to form larger schools and move into deeper water.  Although goatfishes in general don’t have a reputation for being particularly delicate, many local collectors report poor success keeping this species in captivity for more than a couple of months.  They eat aggressively and seem less prone to the standard protozoan parasites that plague many of their conspecifics (like butterflyfishes, puffers, and filefishes), yet they tend to waste away, even in large aquaria with plenty of food and deep sand for sifting.  I have often wondered if they are carrying a heavy burden of internal parasites, which would certainly explain these observations. However, the early arrival and rapid growth of the red goatfish on Long Island point to another possibility: Perhaps this is more of a sub-tropical or temperate species, using the highly-productive waters in the northern limit of its geographic range as a nursery. There is mounting evidence that other “tropical” species like crevalle jacks are not strays so much as they are temporary residents, spending their first summer in the northern states, from Virginia to New England, then heading back to Cape Hatteras and south in the fall. If the red goatfish really is more of a warm-temperate species, that might explain its inability to adapt to tropical aquarium life. One of the problems with keeping ectotherms at temperatures above their ideal range is that it speeds up their metabolic processes to a point where they can’t get enough food to manage their energy budget.

On Long Island, the spotted goatfish is most commonly found on the rocky slopes associated with jetties.  It is very similar in appearance to the red goatfish, especially as a small juvenile.  So similar in fact, that many local fish collectors don’t recognize that two species of goatfish can be found here (Actually, we get at least three species, but I can’t confirm that I’ve seen the dwarf goatfish, Upeneus parvus).  Both species are highly variable in coloration with a bold reddish lateral stripe and a red blotched pattern below the stripe.  To complicate identification, both the stripe and blotches can appear and disappear from moment to moment in both species.   A close examination will reveal a number of physical differences that are relatively easy to recognize, like the shape of the head as well as several meristic and morphometric characters.  Obviously, using coloration to distinguish these species might seem like a lesson in futility, but one helpful trait that can be used to identify Pseudupeneus maculatus is that the three spots on each side, from which it derives its common name, are actually part of the lateral stripe.  So when the stripe fades, the three bold spots usually remain.

For those interested in collecting fish for an aquarium, the most important difference between these two species is that unlike M. auratus, P. maculatus seems to thrive in a tropical aquarium and has no problem keeping weight on.  Not surprisingly, the spotted goatfish shows up later in the summer, around the same time we start to see butterflyfishes, bigeyes, and tangs, suggesting that this is actually a tropical stray. 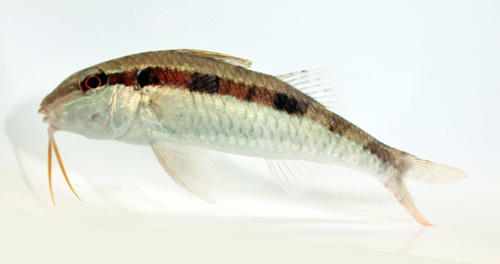 A spotted goatfish with its stripe and blotches fading