I recently wrote a piece about looking back at the captive breeding success of Borbonias Anthias, and provided some behind-the-scenes stories for you guys. To my surprise, it was really well received. In fact, many people contacted me to talk about it. All this positive interaction encouraged and inspired me to write up another piece on aquaculture which in my opinion left a HUGE mark from the get go.

With this piece, I would like to talk to you about how Poma Labs blew my socks off.

The year was 2017. San Diego MACNA was on its way and I had just had the worst flight ever recorded in the history of mankind. It was at this time that I officially took over Sanjay’s bad travel juju, but we will save that story for another time. Anyhow, I had just arrived to my hotel room, having not slept at all; in fact, I had been in the airport all night while trying to fly across the country. I was groggy, jet lagged, hungry, and exhausted.  At 9:15 AM, my phone started going off; it was a notification of an email.

The email was from Matt L. Wittenrich. The name seemed familiar but it didn’t register with me at the time. I usually get my fair share of press releases and invites from booths to come over and check them out, so I didn’t think much of it, but I saw that the message contained another familiar name: Nuri Fisher of Piscine Energetics (aka PE Mysis) –  they would be in their booth waiting for me. I thought to myself, ‘Ok, these guys are legit then, I will go check them out first when I go in because they are conveniently located near the entrance’. Poma Labs… hmmm. I didn’t see the connection just yet.

I got ready and headed down to the show an hour before they opened because well, that’s what we content providers do. We start our grind before anyone else and hold a rigorous and grueling schedule for the duration of the show(s). Getting back to the show, I went to Piscine Energetic’s booth and met Matt. We shook hands and started to talk, when out of the corner of my eye, I saw something that I have NEVER seen before. It was a school of baby Conspicuous Angelfish (Chaetodontoplus conspicillatus)! I immediately stopped him from talking (looking back, I think this could have been very rude and I am very happy that he didn’t take it that way), mic’d him up and started filming. I made the connection after seeing various angelfish and realized that what had happened: they had just captive bred Conspics!!! Known as one of the crown jewels of the Angelfish family, these were extremely rare fish that were coveted all around the globe for their beauty.

The realizations started to set in after looking at all the different species of angelfish in the tank. Poma Lab = Pomacanthus Lab. This is an Angelfish-oriented company. After hearing him talk for a while, it finally hit me! This was Doctor Matt Wittenrich, the legendary breeder from the University of Florida and Rising Tide who authored several books that have left a huge mark in the world of aquaculture, such as The Complete Illustrated Breeder’s Guide to Marine Aquarium Fishes (which tells you how to breed over 90 different species of marine ornamental fish). Tingling with excitement, I refocused on his interview and soaked up everything he had to say; after all, this was an absolute legend, everything he was saying was aquaculture gold, and he had come out of his brief hiatus to lead an aquaculture revolution. Sounds mind bogglingly exciting right?

Our hobby is advancing at neck breaking speed and Dr. Wittenrich is at the forefront. The days of waiting years for a single species are gone; multiple new species of fish are successfully being bred every year. In the case of Poma Labs, they didn’t introduce just one angelfish in the first year, they introduced 9 different species of angelfish ALL at the same time! In my opinion, that year Poma Labs left a big mark in the world of aquaculture. Conspic Angelfish, which I had never seen smaller than 5-6″ coming in from the wild were in front of me as 1″ babies, chomping down PE pellet foods and begging for more. That was sight that will forever be ingrained in my brain. 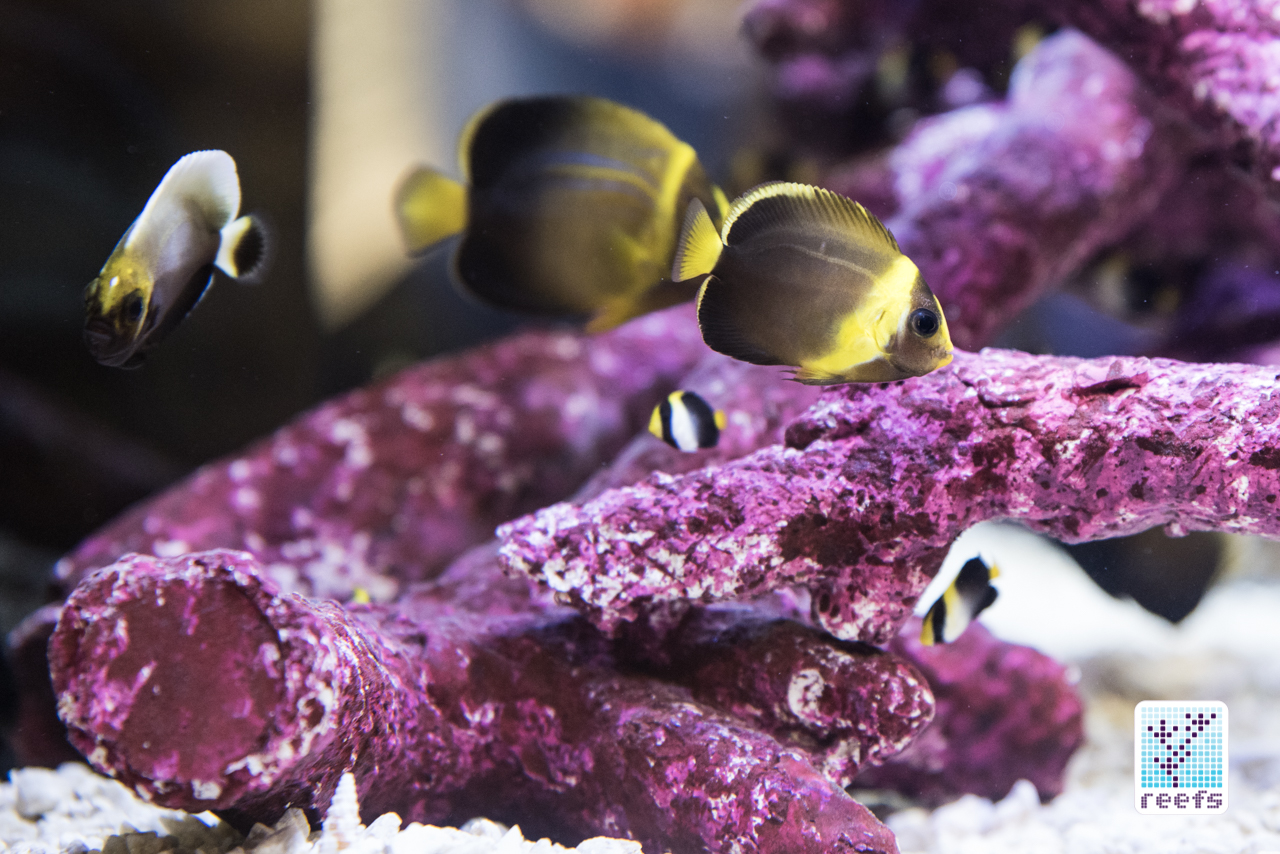 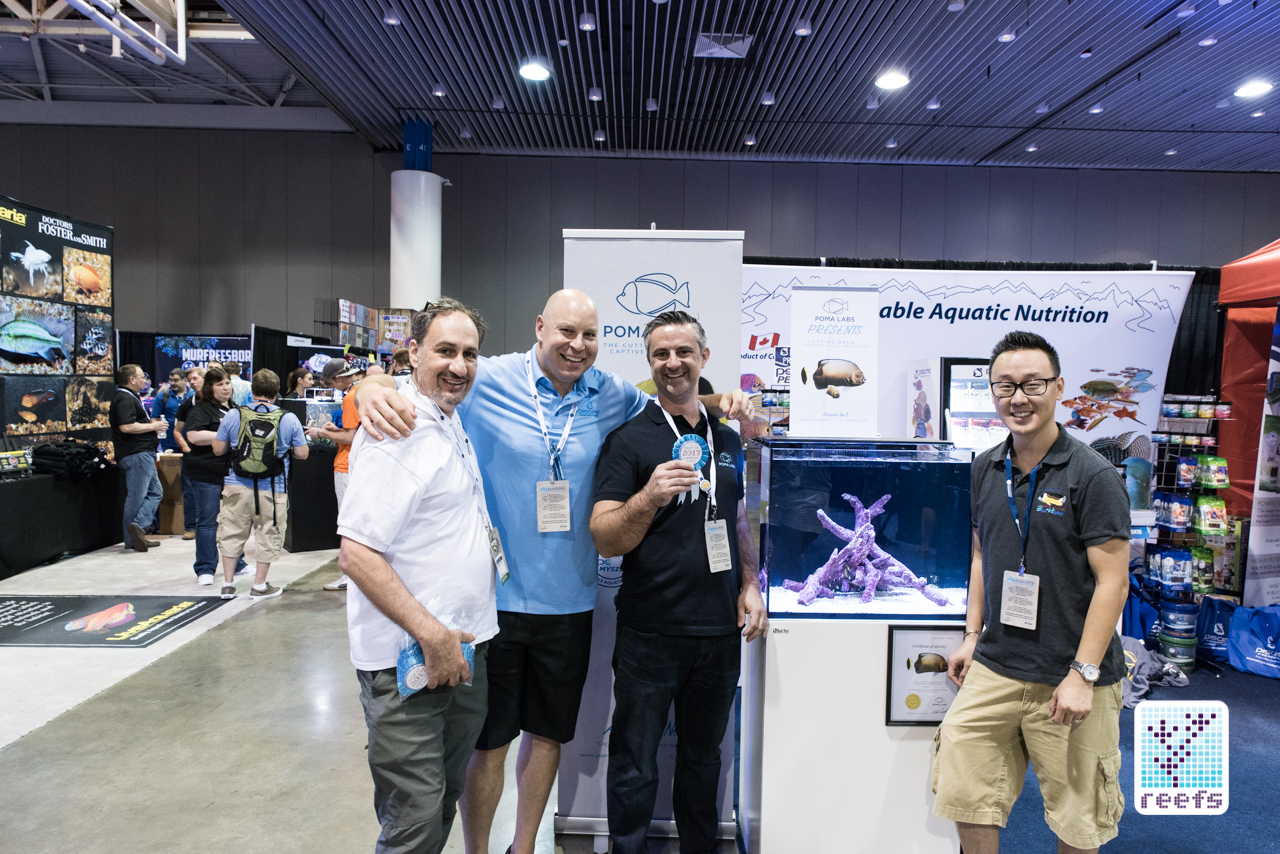 Without saying, Poma Labs took home one of the Reefs.com / Afishionado Awards from me that year. Their efforts and what they have accomplished had to be recognized and I was extremely happy to present the award to this well deserving company. This was an absolutely mind blowing/ boggling experience and one that I feel extremely fortunate to have been a part of, as this was truly an monumental moment for our industry. Fast forward a few years, and what’s interesting and great is that now, aquacultured Conspic angels are on par with wild caught Conspics in price range. It’s really a no brainer to go with the captive bred instead of the wild counterpart. Not only is it healthy, guaranteed to eat, and marked with special dye to authenticate it along with certificate of authenticity, it’s disease free and backed by industry best 30 day guarantee. I really think that future is now for aquaculture and am truly excited to see what future holds for us hobbyists.

Check out the full interview of Poma Labs iat MACNA 2017 below.