Monday Archives: This Is Why I Love Technology – The Reactive Reef Project

One of many reasons, that is. Somewhere around Ofu Island in American Samoa, during the torrid days of the 2013 summer, an interdisciplinary coral reef imaging and mapping project was underway. The results were striking. Vivid, gorgeous panoramic images of what vibrant life flourishes beneath the surface.

Reactive Reefs is the collaborative project of cell biologist Tamaki Bieri, and Ved Chirayath and Trent Lukaczyk, both graduate students at the Department of Aeronautics and Astronautics at Stanford University. The study serves two purposes – acquiring scientific data by mapping Ofu’s reefs and monitoring coral growth, and secondly, scientific outreach to raise awareness of the current state of coral reefs. In addition to being a grad student, Chirayath is also a professional photographer. He utilized a technique called “Fluid Lensing” in order to capture the stunning photographs you’re laying eyes on here. The curious technique actually uses fluid as a lens to allow shallow subsurface targets to be obtained with minimal distortion. They also brought in muscular tripods, capable of withstanding the unforgiving force of the waves, in order to achieve the panoramic images they sought. For aerial mapping, a quad-copter was equipped with a GoPro camera for two weeks, resulting in one of the highest-resolution optical maps of subsurface marine targets to date (pictured below). This outcome enables a much  more efficient method of monitoring and recording coral growth, as in the past researchers had to swim into the reefs, tag, measure and photograph the corals and return and repeat to observe any expansion. Via this method, they can actually generate a 3D replica of the reefs, which would be quite a bit less tedious. For more information, take a look at this article featured on The Global Scientist. 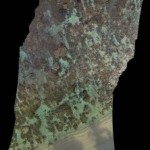 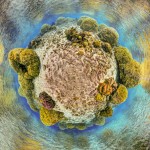 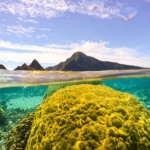