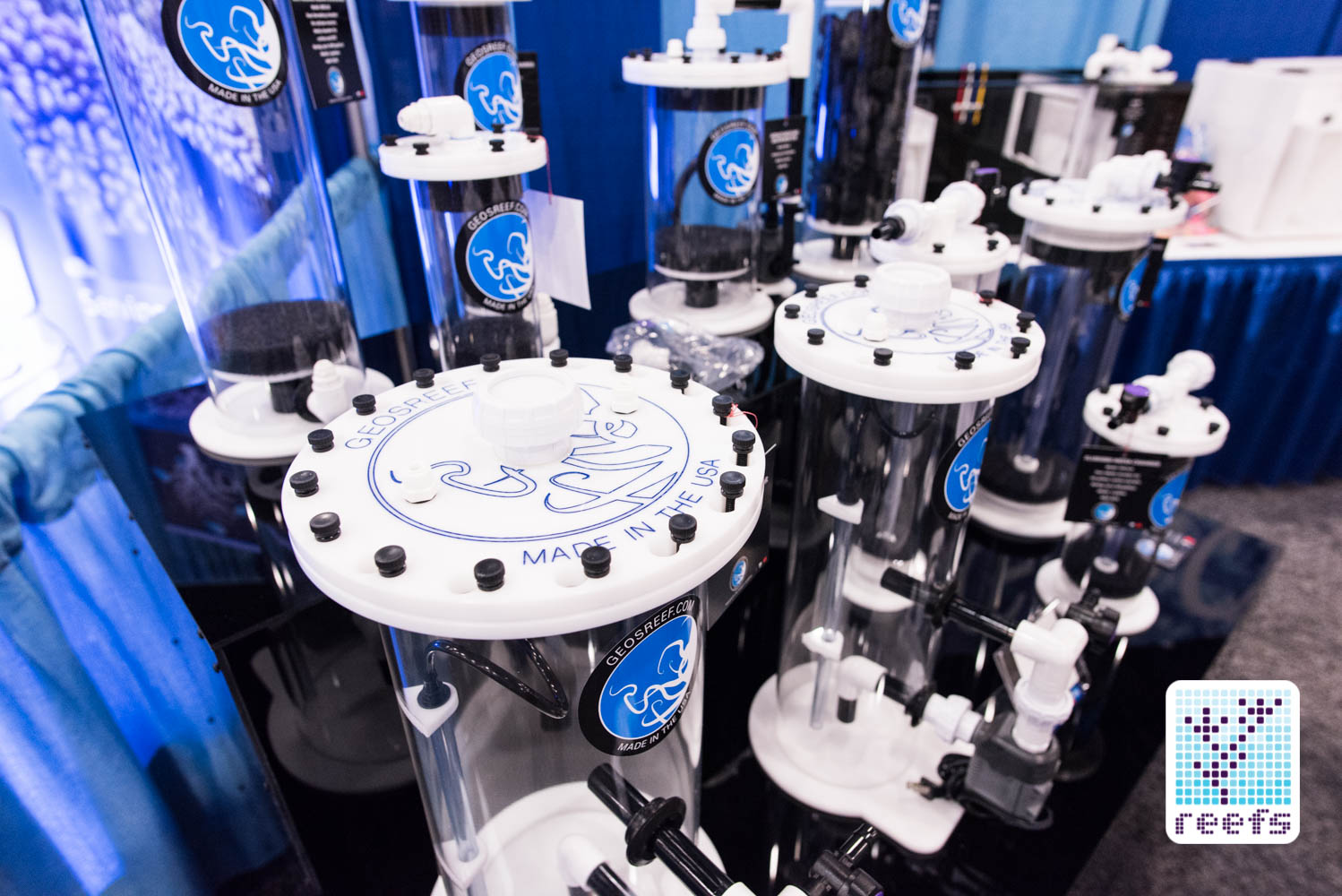 MACNA 2016 saw Geo’s Reef debut at a major aquarium trade show, a promising sign for this custom aquarium manufacturer based in Newark, OH. Through years of producing high-quality, long-lasting equipment for the aquarium hobby, the company made a name for themselves as a “go-to” manufacturer for calcium reactors, various media reactors, and frag rack systems. 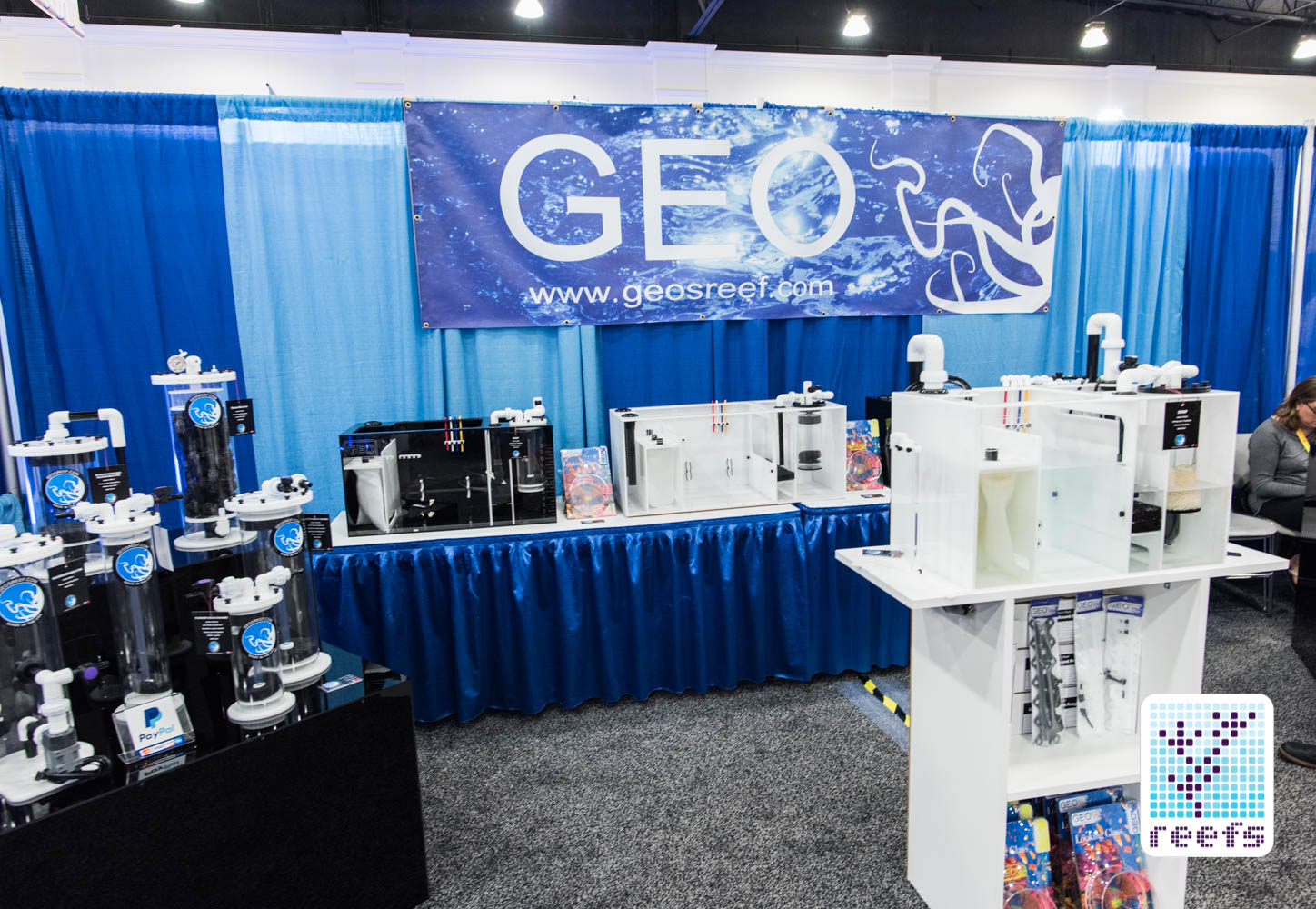 Geo’s Reef new addition for the 2016 is perhaps the most impressive item yet. The jaw-dropping new sump series, code name “R”, is everything you would ever dream of in a sump and more, all at a price that isn’t outside the realm of most aquarists’ budget. 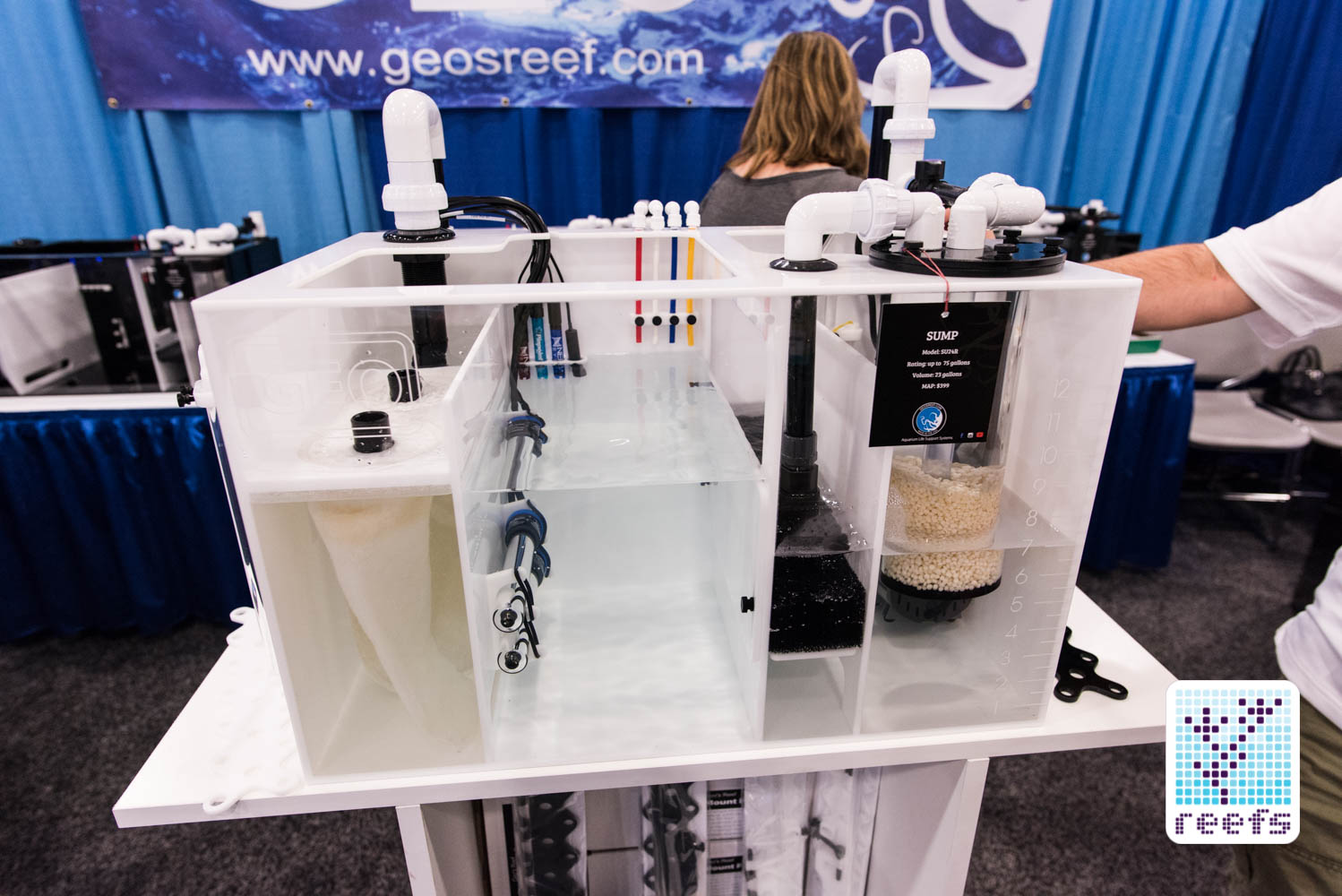 I had a pleasure to talk with Geo’s Reef CEO, Mr. Serdar Ercan, who explained in brief the magic behind the “R” series of sumps.
The new sump line consists of 4 models, from the smallest SU24R, measuring 24”x15”x15” and holding a little over 23g of water, through SU30R and SU36R, holding 29g and 35g, respectively, to the largest model, the SU46RD, with dimensions of 46”x15”x15” and a capacity of almost 45g.
I have to admit, Geo’s Reef sump was my favorite piece of equipment shown at MACNA 2016 and will definitely be my choice for sump if I upgrade my tank. 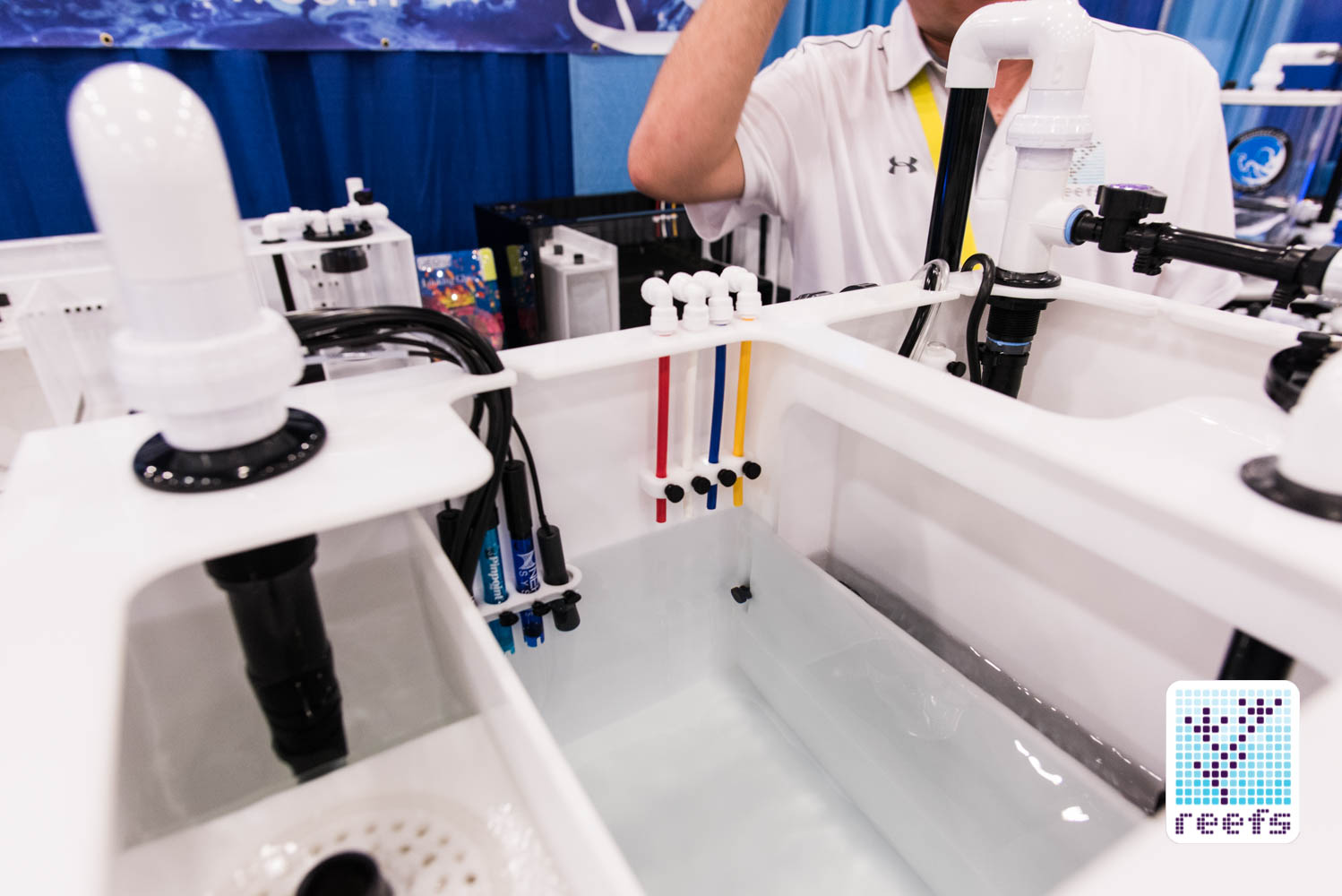 Every sump in the “R” line looks and feels amazing. They are constructed from high-quality, US-made acrylic panels, cut, glued and polished to the highest standards. That’s just the beginning though- the number of features and clever design choices packed in this gem of a sump is astonishing. Every model in the line comes with an incredible list of features:
-a built in (but removable) fluidized canister (two for SU46RD) that you can use to run GFO, carbon, or other media
-heater holder(s)- a clip that holds an aquarium heater
-probe holder- holds standard temperature, ph, ORp, and other probes
-dosing holders- a built in quick connect connectors to use for dosing liquid media
-cord outlets- a special cut-out in the acrylic to hold equipment cords
-an adjustable baffle to control level in skimmer chamber
-float tree- a special acrylic holder for float switches
-filter socks complete with holder and plumbing fittings 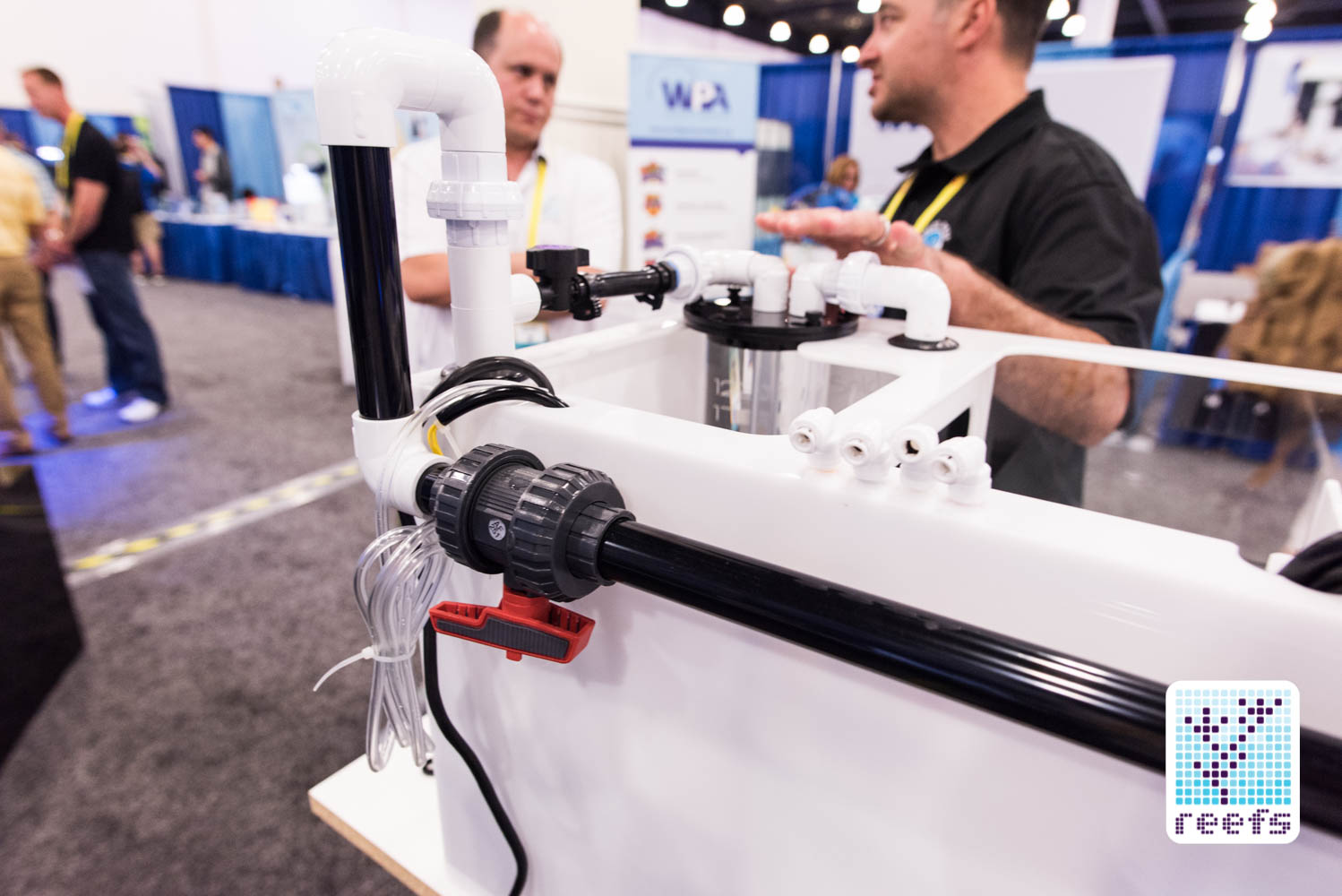 The back side of R Series sump

And that’s only a small part of the innovations in sump design Geo’s Reef packed in the “R” series. It’s a fantastic piece of equipment available at a modest price that I would love to get my hands on for further review.
Check out the Geo’s Reef booth gallery of pictures below: 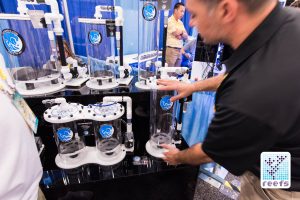 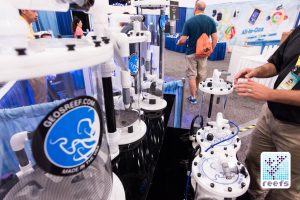 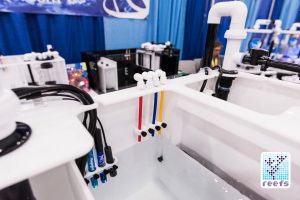 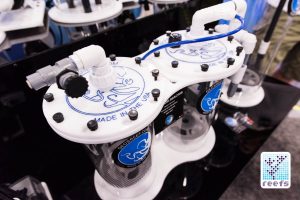 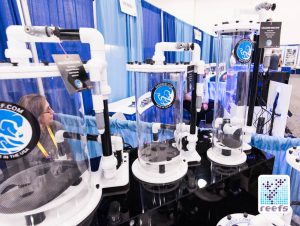 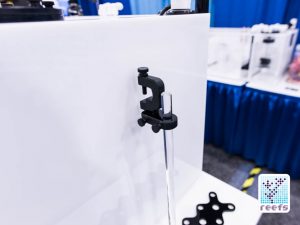 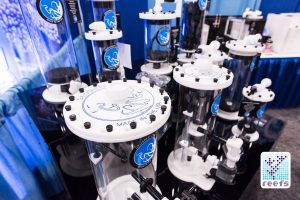 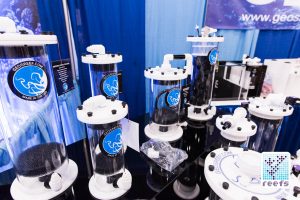 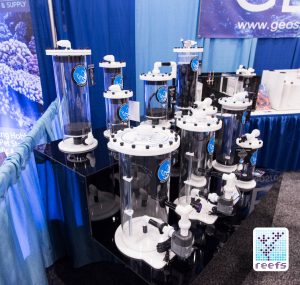 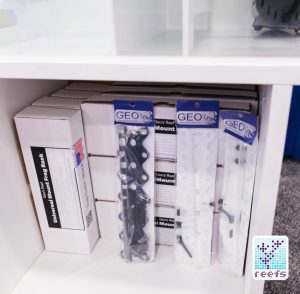