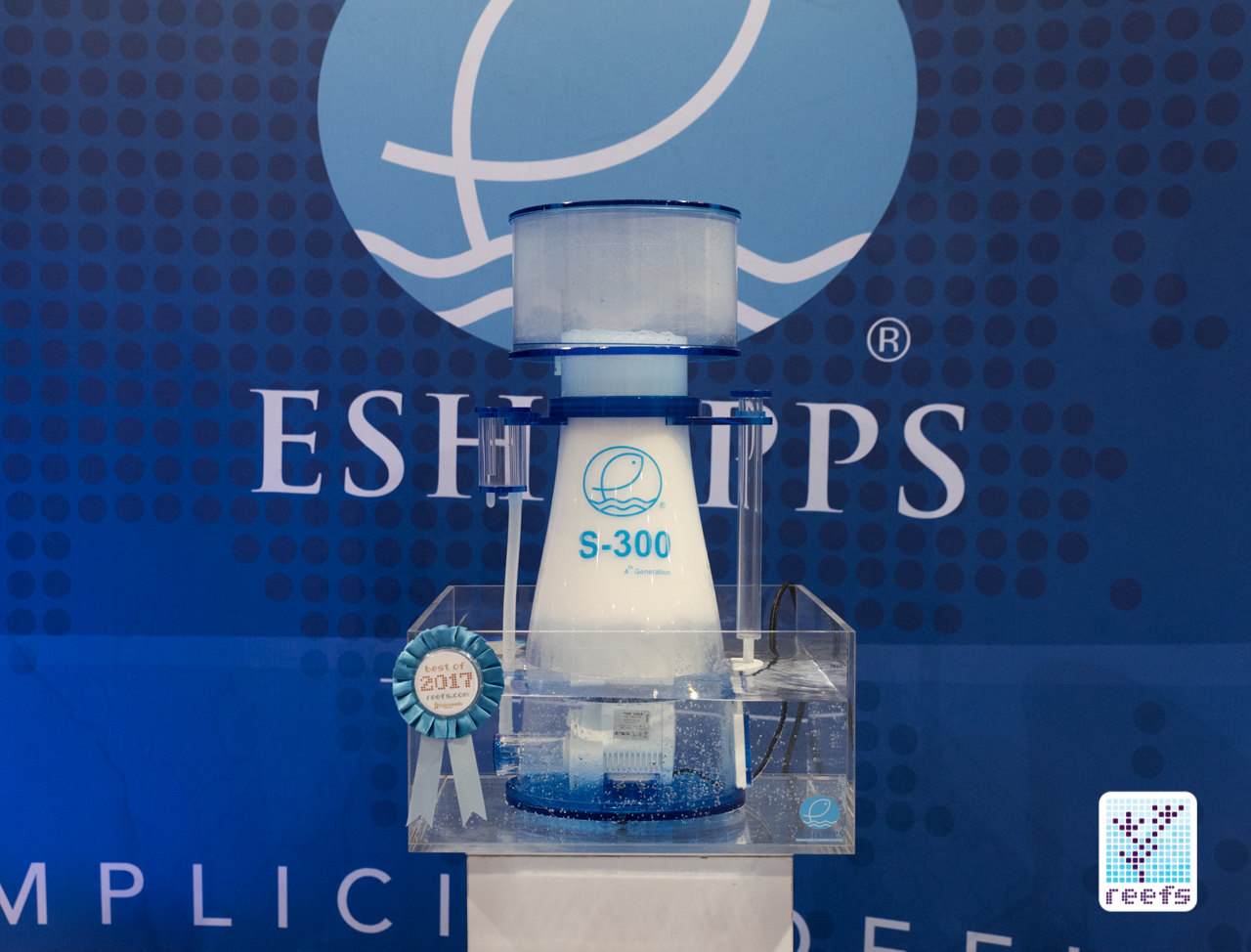 Eshopps treated this year’s MACNA attendees with a bunch of interesting new products. About half of this Southern California-based company’s booth was occupied with an extensive display of the brand new line-up of protein skimmers, which the manufacturer came up with for the 2017/2018 seasons.

Starting with the premier S-series line, Eshopps completely revamped their cone shaped skimmer- there are numerous technological advancements and new ideas present in its build. Eshopps calls it EID (Eshopps Intelligent Design) technology and it consist of a series of (patent pending) innovative solutions built right into the new skimmers. 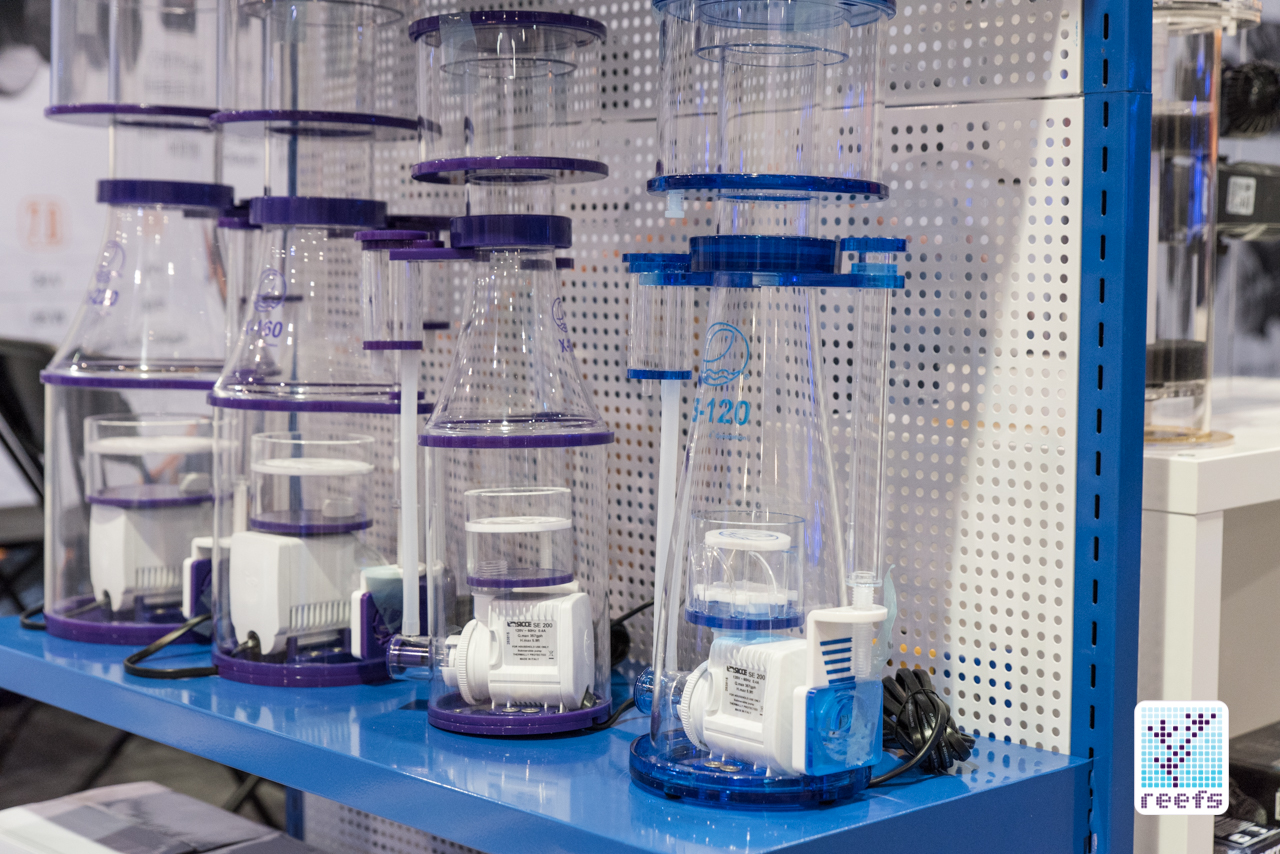 The S-series consist of three models- S-120 rated for aquariums between 40-120 g, S-200 for tanks between 120-260 g and S-300 for the largest systems 260-500 g in volume. At the heart of each of the three models sits a custom made sicce pump (an exclusive for Eshopps) and a completely redesigned bubble plate called Eddy. Eddy Bubble plate contains a series of angled baffles that create a circular movement of bubbles and water before they enter the main reaction chamber. That effect drastically extends contact time and makes bubbles much smaller than what standard bubble plates & venturi produce. In fact, the venturi  attached to S Series sicce pumps is transparent, which means that any calcium buildup can be easily seen and taken care of quickly. So are the silencer and water column adjustment screw. 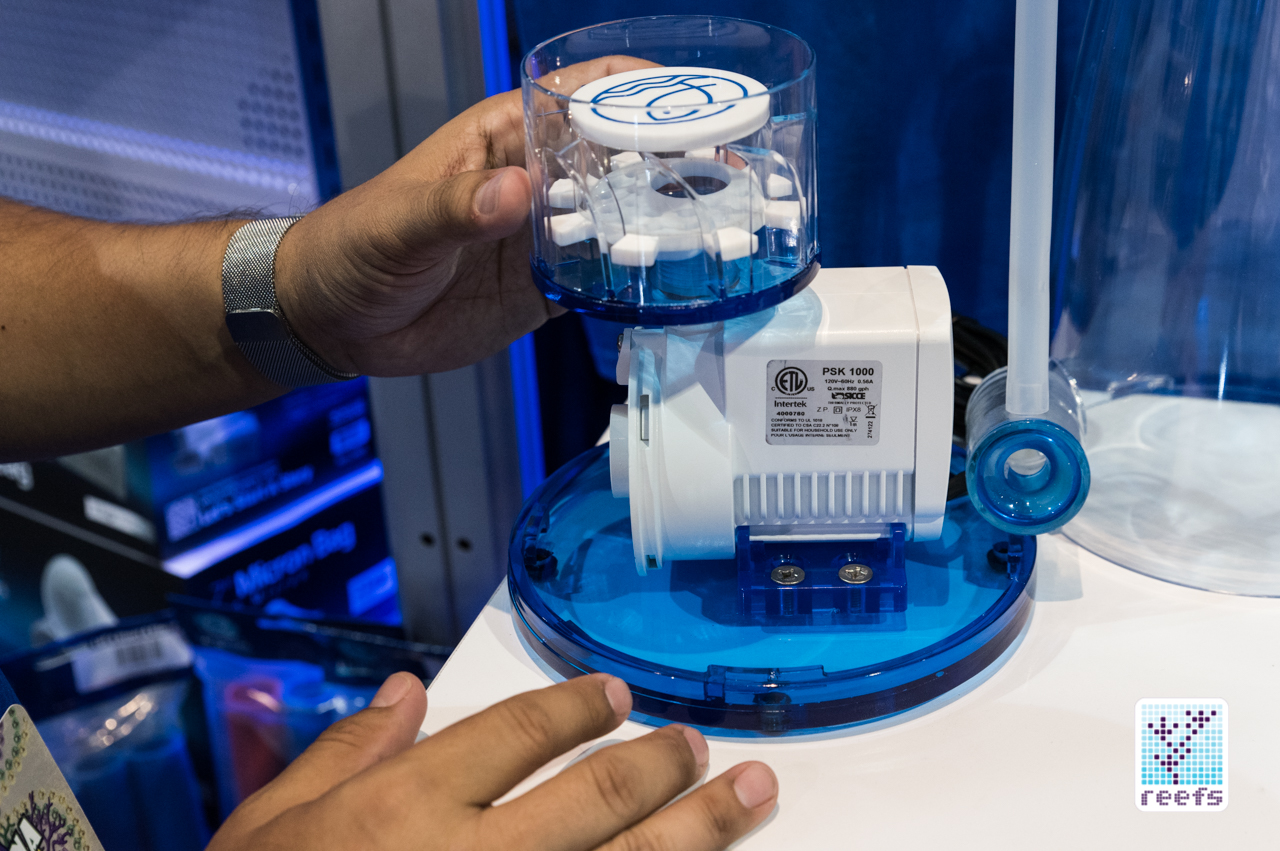 With S-series, Eshopps aimed for ease in cleaning and maintenance. The whole skimmer body has a twist-off base and even the pump itself is on a special bracket that is held with a single screw and a locking mechanism. Similarly, the Eddy bubble plate can be unscrewed from the pump’s outlet and cleaned independently

The X series skimmers, also called Axium, are marketed as a mid-level devices and share a lot with their higher price S-series counterparts. Consisting of four models (x-120 for aquariums between 40-120 g, X-160 for 100-225 g tanks, X-220 for 200-325 g and the largest X-350 for 300-450 g systems), the X-series are built using same custom made sicce pumps sitting internally and identical transparent venture found in the S-series. They differ from the latter in that they lack the Eddy bubble plate and feature a more standard, modular body. They will cost less, naturally. 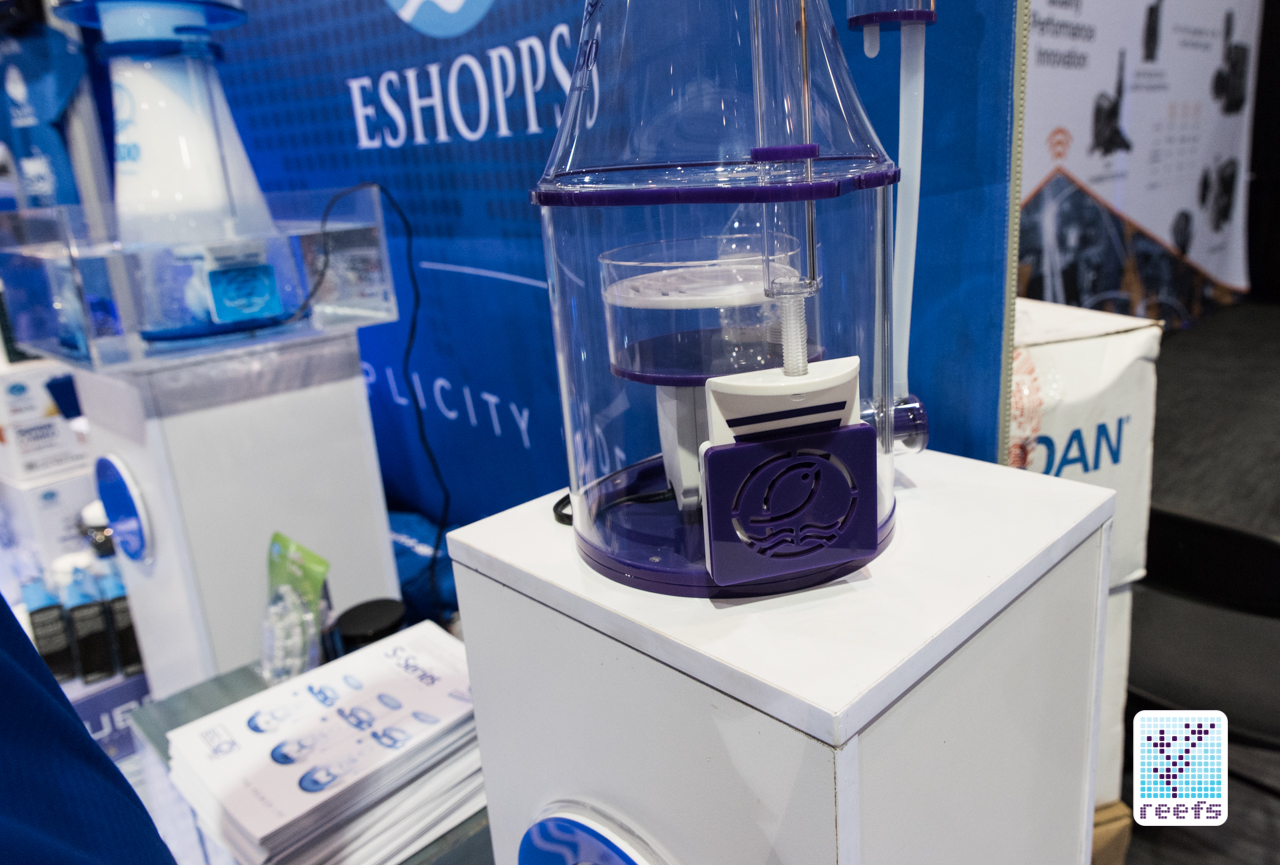 There is an impressive number of innovations built right into the new line of skimmers Eshopps presented at MACNA, and I was quite amazed at how well the S-Series model at the booth worked. It was totally silent and produced some of the finest bubbles I’ve ever seen in a skimmer. We were proud to present the “Best of show” to the Eshopps team for their commitment to innovation in reefing hobby equipment. 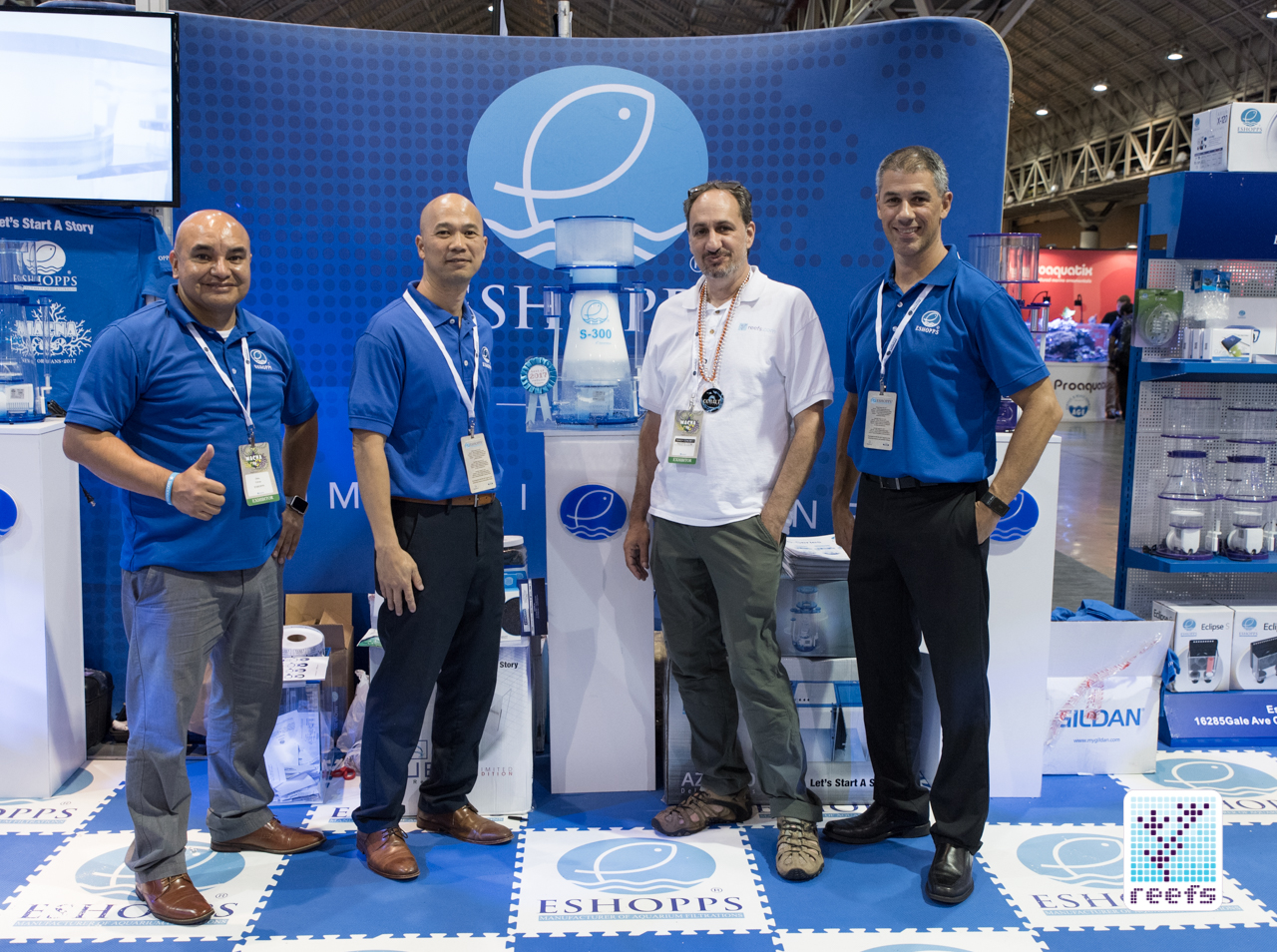 Take a minute to check the official page of the S-series and the X-Series of skimmers and stay tuned for more news from the Eshopps MACNA 2017 New Orleans booth!