While you were at MACNA: Groundbreaking study on reef recovery and coral recruitment. 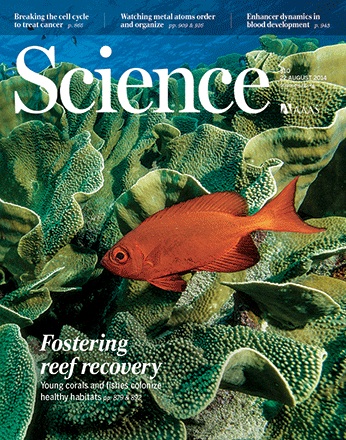 A remarkable piece of research was published in the journal Science this past week, absorbed by the scientific community while you were all being enchanted by Mitch Carl’s emcee repertoire. And it further points to a global coral reef realm on the razor’s edge. Danielle Dixson and Mark Hay, from Georgia Tech, and David Abrego from Zayed University provide new evidence that recruiting fish and coral larvae actively avoid waters derived from degraded reefs.

The scientific team utilized waters from healthy reefs in no-take marine protected areas and waters from adjacent degraded reefs along the coast of Viti Levu, Fiji, sometimes as close to one another as 100 m, to monitor preference of coral and fish larvae for recruitment preferences to one environment or the other.

Dixson et al. determined that algal cues derived from the degraded reef systems quite literally “repulsed” would-be recruits of coral larvae, even when the potential recruits remained present in the water column. The contrary expectation also held true: corals overwhelmingly preferred to recruit in waters derived from the protected areas.

The team dug even further, searching for the source of this discrimination. They used cues from conspecific coral colonies, congeneric colonies as well as a diverse mixture of stony corals rubbed onto settlement tiles to test origins of the preferences. The stony coral mixture was the most attractive, but the addition of crustose coralline algae was the real windfall for settlement: a 1600% increase versus control tiles. Rubbing tiles with the common seaweed Galaxaura resulted in no settlement. That’s right, zero recruits.

The implications here are vast: the scientists present strong evidence that once a reef degrades, there is a potential negative feedback spiral that prevents a straightforward recovery. More optimistically however, it appears the benefits of establishing a no-take marine protected area on a non-degraded reef system will have positively reinforcing results, focusing recruitment and diversity with little to no negative effects from even very close degraded reef environments.