Algae: Sometimes Both Beautiful and Useful 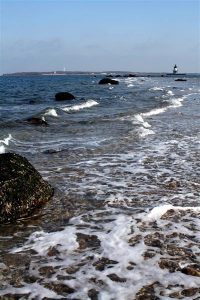 Just the mere mention of the word algae in a room of aquarists will send them running for their scrub pads. Algae are the nemesis of most aquarists, from pesky diatom algae covering our décor in a brown film, to the nearly impossible to eradicate hair algae. Not all algae should be despised however; many types are extremely useful and some can be quite beautiful.

Most of us are familiar with the ornamental species common to the trade, such as Caulerpa and Chaetomorpha. Occasionally species of Codium, Halimeda, Acetabularia, and some miscellaneous red species will show up at your local fish shop attached to a piece of base rock. But how many of us have wandered the local shoreline in search of algae for our aquariums?

Living on Long Island, I am fortunate to be minutes away from the bay or ocean. A short walk along the shoreline at low tide will expose you to a wide variety of algae. Many of the species, being temperate in range, will tolerate a wide range of temperatures, including those of a reef environment. Knowing what to look for will enable you to collect algae for your home aquarium.

There are three phyla of algae; Chlorophyta (green), Chrysophyta (brown) and Rhodophyta (red). Each of these phyla has unique characteristics causing them to be found at different depths of the water column. 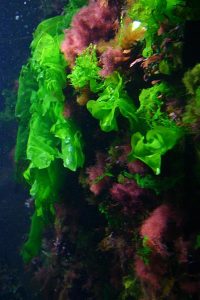 Chlorophyta, the green algae, need more light than the other phyla and will be found higher in the water column. Of the greens, Ulva lactuca, or better known as sea lettuce, is probably the most abundant and widely known. Growing in large, thin sheets, it is unmistakable. Ranging from subarctic to tropical environments world wide, it can be found growing among the rocks of an inlet, to the calm waters of the back bay. It is frequently found thriving in areas of high nutrients.

A species similar to Ulva lactuca is Ulva intestinalis (formerly, Enteromorpha intestinalis). This green alga shares the same environment as Ulva lactuca but grows in long narrow tubes. This growth form allows it to survive in areas that might be too turbulent for the delicate sheets of U. lactuca to grow. As with many plants and even some animals (i.e., corals), morphology will vary with environmental conditions. In areas of high current or wave action, it tends to grow in very narrow tubes, almost as if it was hair algae, while growing in wider tubes in calm conditions. Large blades growing in such a turbulent area would only be broken off before the alga gets a chance to grow. Like U. lactuca, U. intestinalis has a worldwide range.

Arriving to the east coast of America from the Pacific in 1957, Codium fragile is an invasive green alga that is quite abundant. Commonly called Dead Man’s Fingers or Green Fleece, C.fragile grows in ropelike spongy branches, and when exposed at low tide, it looks like fingers. C.fragile is unique as it is a long single cell that is made up of many nuclei but no cell wall dividing them. Being able to reproduce by fragmentation has allowed it to spread easily through out the east coast of North America. This invasive species has been very destructive to shellfish beds, especially oysters. Upon attaching to a shellfish, wave action causes the shellfish to be “uprooted” and the currents wash it ashore. This species is commonly found in calm, protected waters. Locally, I tend to find it attached to some of our more common epibenthic mollusks such as Cockles and Slipper Shells. 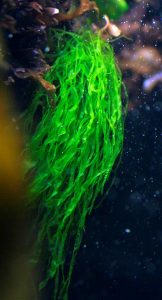 Chrysophyta, the brown algae, tend to grow much larger than the greens. Some of The most common brown algae of the intertidal zone belong to the genus, Fucus. Fucus can tolerate exposure to a wide range of environmental conditions. Being exposed at low tide, it is subject to freezing in winter months, and to extreme heat and dehydration in the summer. To adapt to these harsh conditions, Fucus has thick rubbery blades allowing the algae to retain moisture while it is exposed. The blades of Fucus have many air bladders that provide buoyancy for the blades. This buoyancy allows the blades to sway in the currents removing any detritus that has settled during the low tide. Algae growing in high surge areas will have fewer bladders as the current will keep the blades moving. Growing mostly in cooler waters, it has a worldwide distribution.

Another type of brown algae found on our shorelines is kelp. When talking about kelp, we think of the giant kelp forests of cold-temperate waters such as the California coast, New England, and western South America. Some species, such as Macrocystis pyrifera, can grow at a rate of 30 cm a day and can reach a length of 60 meters. Like Fucus, giant kelp has air bladders that keep it suspended in the water column. On the east coast of North America, our species of kelp, Laminaria agardhii, is much different than M.pyrifera. Under ideal conditions, it can grow 2 cm a day, growing to 3 meters in length. Looking like a large lasagna noodle, it has one large blade, a stipe (similar to a stem), and a large holdfast. Similar in appearance to roots of vascular plants, the holdfast’s sole purpose is for attachment, there is no nutrient uptake. Growing in areas of strong surges, the holdfast is important to keeping the alga from washing away. Unlike M.pyrifera, L.agardhii has no air bladders. It depends on strong currents to keep it suspended in the water column. Long Island is the southern most part of Laminaria’s range, and can only be found in the winter months. 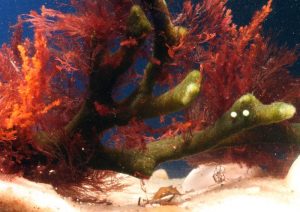 Codium fragile with a red algae growing as an epiphyte.

The last group of algae you will find while walking the beach are the Rhodophyta or red algae. Red algae contain a pigment called phycoerythrin. This pigment absorbs blue light and reflects red light, giving the algae its red color. Being that blue light penetrates deeper in the water column, red algae tend to be found growing at greater depths. This can make it a little more difficult to collect as you might need to get your feet wet to find a suitable specimen. An abundant and well-known red seaweed in our local waters is Chondrus chrispus, better know as Irish Moss. C.chrispus is commercially harvested for use in the food industry. Carrageen is an extract of Chondrus that is used as a thickener in soups and dairy products. 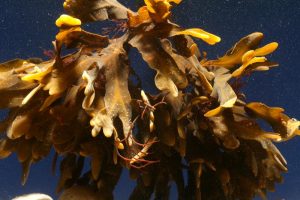 Two other species of red algae commonly found around Long Island and ranging to the tropics are, Agardhiella tenera and Gracilaria foliifera. Both species are delicately branched and their color can vary from a bright red to almost brown. They can be found attached to rocks or shells, but are more commonly found free floating. They seem to prefer calm waters where they are less likely to be washed ashore.

Too often marine macro algae are only considered to be part of an aquarium’s filtration system. They are tucked deeply away in a refugium under ones aquarium, never to be shown as proudly as the main tank. Many of these algae are extremely beautiful, and deserve their own display. Although they do pose some challenges in keeping them, it can be done and I will share with you how to keep them in a future article. 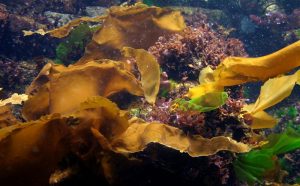 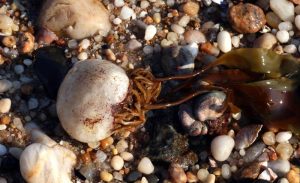 The holdfast of Laminaria. 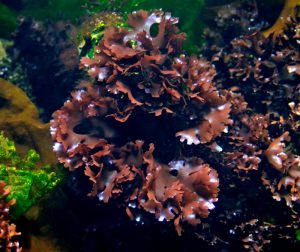 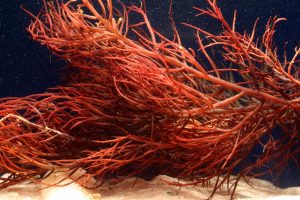 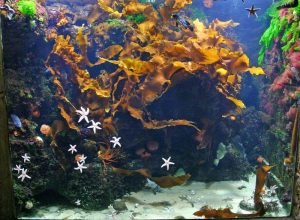 This is the macro algae tank I care for at Atlantis Marine World and will go into more detail on the care of such a tank in a future article.