I was scheduled to give a presentation to a reef aquarium club some time ago, and I figured I’d try to do something different after the talk. I asked to have everyone coming to the talk bring all of their water testing kits, expired or not, just to see what would happen if a bunch of hobbyists tested the same water samples with different kits. With the help of my colleague and organic chemist Dr. David Flanigan, I got some water samples ready, and the club members brought in 14 pH kits, 9 nitrate kits, 14 calcium kits, and 12 alkalinity kits. They brought in 10 refractometers/floating hydrometers, too. 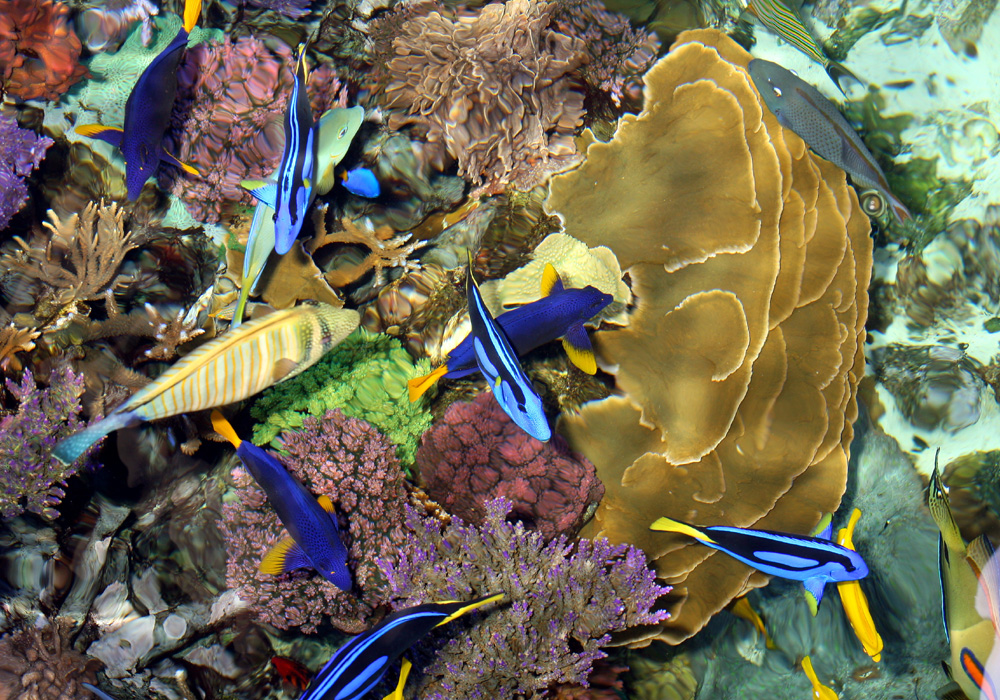 I gave out some slips of paper that asked for the brand/type, expiration date, result, and any comments, and asked to have them filled out accordingly. I also asked them, time allowing, to give their kit to someone else when they finished with it, so we could see what happened when two people tried using the same kit. So, I’ll give more than one result for some kits, but only one for many others.

Note that no one was told where the water samples came from before testing in order to help reduce any bias in findings. In fact, they were told that some of the water wasn’t from an aquarium (it wasn’t). The results of these tests were quite surprising to say the least, and are certainly worth a look. Make sure that you look at the whole article (for reasons you’ll see below).

A Milwaukee MR100ATC refractometer used in this study. 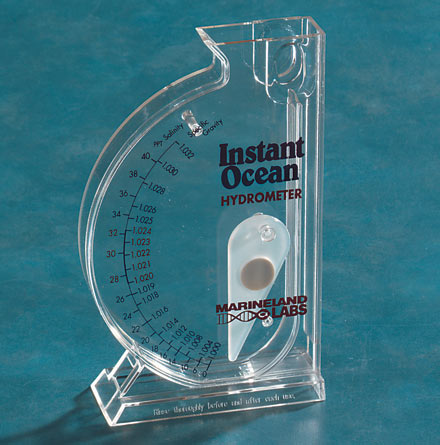 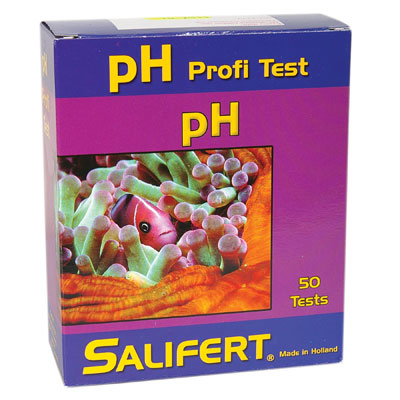 A typical Salifert pH test kit utilized in this study.

To test pH kits, we used the same water that was taken from an aquarium. David used a triple-calibrated Oakton Instruments Testr-2 digital pH meter and found that the pH of the sample was 8.2. 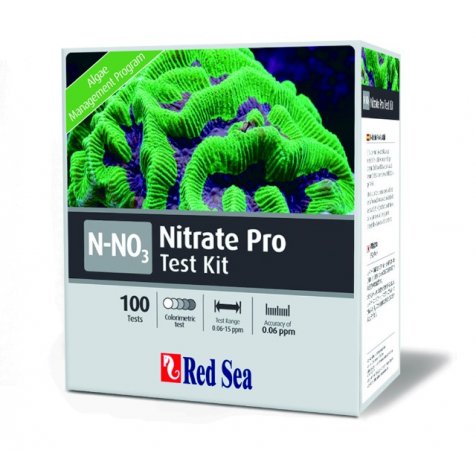 To test nitrate kits, I did not want to use tank water as I expected it to have a very low concentration. So, David made up a standard for us to use, which had a nitrate concentration of 25ppm. 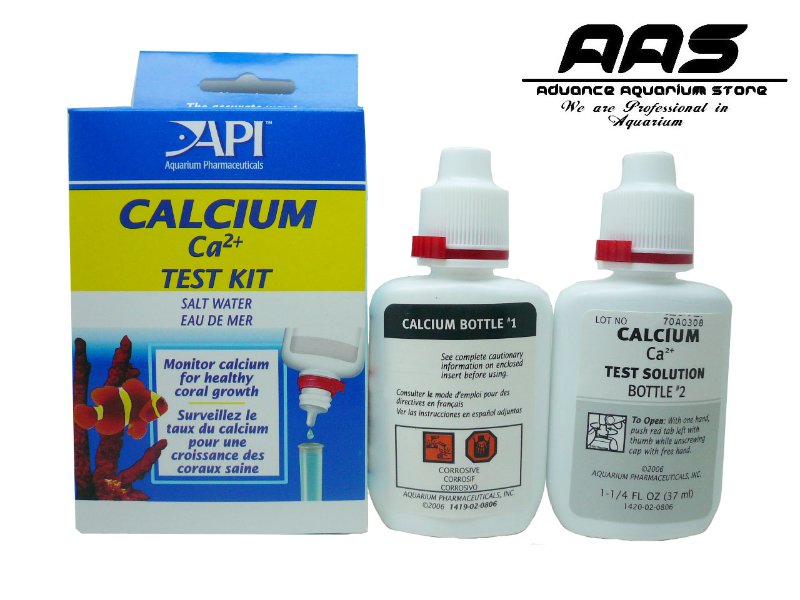 To test calcium kits, we again used the aquarium water. I took a sample and sent it to a local water quality lab and they reported that the concentration of calcium was 338ppm. 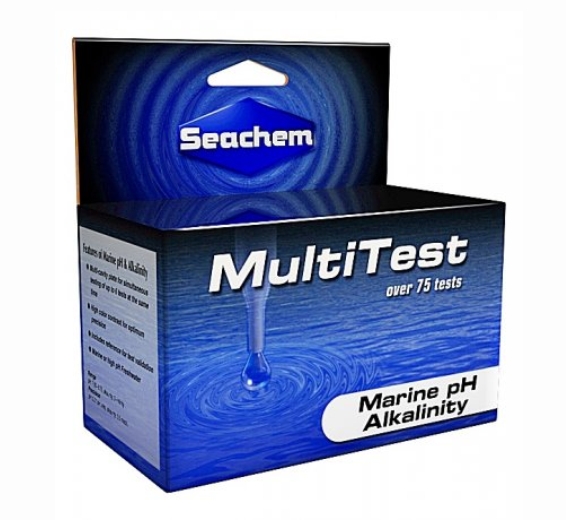 Seachem MultiTest for pH and Alkalinity.

To test alkalinity kits, we used the same aquarium water. And again, I took a sample and sent it to the lab, which reported that the alkalinity was 3.3meq/l. Note that different kits may report results in either ppm, meq/l, or dKh, but I have converted all results to meq/l for ease of comparison.

First, I’m just the messenger reporting results turned in by a group of reef aquarium hobbyists. So please don’t sue/shoot me if you don’t like the findings! Other than that, what a mess. The results for many types and brands of kits are obviously all over the place, and I guess the question is why that’s the case.

Well, most of the kits were expired, which could obviously cause problems. Although, in some cases the expired kits performed as well as or even better than the current ones. Of course, that could have simply been random chance. So, it would seem that either (many of) the kits are simply inaccurate, or the method of use produces unreliable results, or (many) hobbyists just aren’t good at following directions and using the kits properly – or any combination of these.

As far as user error goes, this could occur for many reasons and some kits had easier to follow instructions than others. Likewise, some kits are simply easier to use and/or produce results that are easier to read. And, in the case of one of the hydrometers being a little off on the high side, all it takes is a single tiny bubble stuck on the back-side of the swing arm to give such a result. In other words, there are plenty of opportunities to mess things up. So, I’ll take things a step further to show that user error very likely plays a significant role in the apparent poor performances of many of the kits above, especially in cases where a kit was tested twice and gave significantly different results.

At a different time I also wanted to see what sorts of results would be produced if the same person took their time and used the same kit, on the same sample, repeatedly. So, David and I used our own kits and our own funds to go out and purchase a few more from a couple of local shops. We only got one of each brand of kit available to us (did I mention it was our own money?), but we figured that even testing one kit of each brand could be very informative. Besides, any of the kits we purchased could have been the kit that the next hobbyist needing one would have bought.

Depending on the type of dye used by the manufacturers of these kits, some can apparently be used equally well for freshwater and saltwater. However, others may give results that vary as much as 10% between the two (Holmes-Farley 2002). I wouldn’t consider this to be significant, though. So, we figured we’d do both to see what happens.

David made a freshwater standard in the lab, which had an alkalinity of 3.5meq/l, and also made up a fresh batch of seawater using DI water and a popular salt mix, which was aerated for a few hours afterwards then allowed to sit for several more. This sample was then tested 6 times (3 times by each of us) with a Hach alkalinity kit, which coincidentally and consistently indicated an alkalinity of 3.5meq/l. Note that while we are comparing results of kits with the results of a kit, the point here is to look at consistency of results.

First of all, this could shed some light on how two people may do things differently even when following the same set of instructions. For example, when any given set of instructions says “fill to the line” two people may have different ideas of what this means. You’ve probably seen water form a meniscus when put in a glass container, and one person’s idea of filling to a line may mean that the top of the meniscus touches the line, while another may think that the bottom of the meniscus should be at the line, etc.

Secondly, I’m partially colorblind. We thought this might be significant in some cases, as these kits require users to compare a colored liquid (the test medium) to a colored chart or scale of some sort to determine test results. Approximately 8% of males (but only 0.5% of females) are at least partially colorblind (Wikipedia 2012), meaning many hobbyists may have trouble with various colorimetric test kits due to a visual deficiency. So, we both performed the tests to see if I would have any particular difficulties not experienced by David.

Lastly, as noted above, different kits report results in either ppm, meq/l, or dKh, but I have converted all results to meq/l for ease of comparison.

Instant Ocean: This kit was not expired, but oddly enough an expiration date could not be found on the outside of the package.

API: This kit had no expiration date indicated.

Note that the instructions said to cap the test vial with the included cap and to shake the sample after each drop added. However, the cap did not fit well and shaking the sample allowed some sample water to escape the test vial. So, while we started with the seawater sample, the remaining tests performed by both of us were done without the cap, by swirling the sample in the vial.

Red Sea: This kit was not expired.

Freshwater notes: We agreed during all six tests that the final color was a little darker than the darkest part of the scale that comes with this kit. The scale stops at 3.6, so the results may have been slightly higher than 3.6.

Seachem: This kit had no expiration date indicated.

Riddle (2007) also tested Seachem’s alkalinity kit using a seawater sample and found the results to be within about 10% of expected.

Salifert: This kit was not expired.

Riddle (2007) also tested Salifert’s alkalinity kit using a seawater sample and found the results to be about 11% high.

Nutrafin: This kit was not expired.

Now we see a very different picture. As you can see, consistency was actually surprisingly good for any given test when tested by one of us, although in some cases David and I got somewhat different results for the same kit. For example, when I used the Instant Ocean kit for the seawater sample I got 3.5meq/l all three times, but David got 3.25meq/l all three times. When it comes down to it, I personally find a variance of only 0.25meq/l to be very good for an easily affordable hobbyist test kit. For that matter, all results for all kits on each of the samples were within 0.5meq/l.

So, with all this in mind, here are some suggestions: Always check expiration dates on kits and make sure they are up to date. Don’t test when you’re in a hurry. Sit down, take your time, and thoroughly read the instructions. I think it would also be a good idea to use any new kit at least three times on a single sample to see if you/the kit can provide consistent results. If you get different answers, try to figure out if it’s you doing something a little different each time, or if it’s the kit. If you’re convinced it’s the kit, try a different brand. And, as far as overall accuracy goes, it seems that lately there are more and more kits of various sorts that come with their own standards. These should allow you to check a kit’s accuracy yourself.

For the manufacturers of the kits, the instructions on many of these (but certainly not all) were not easy to understand/follow, especially for inexperienced hobbyists. For best results, adding some pictures would likely be very helpful. For example, a picture of what “fill to the line” for a given kit means, etc. would be great and easily clear up any confusion. With respect to alkalinity kits, it would also be nice if everyone would use meq/l.