In the first half of the 19th century, naturalists such as Charles Darwin started exploring coral reefs in more detail. When they gazed into the gin-clear waters of the Indo-Pacific, they saw massive structures built by what they called zoophytes (from Greek; zoon=animal, phuton=plant). These “animal plants” were later found to host microscopic algae in their tissues, which Brandt (1881) coined zooxanthellae (from Greek; xanth=yellow). Much later work demonstrated that zooxanthellae were able to provide corals with a major part of their daily energy requirements, by translocating glycerol and other nutrients to their coral host (Muscatine 1990). 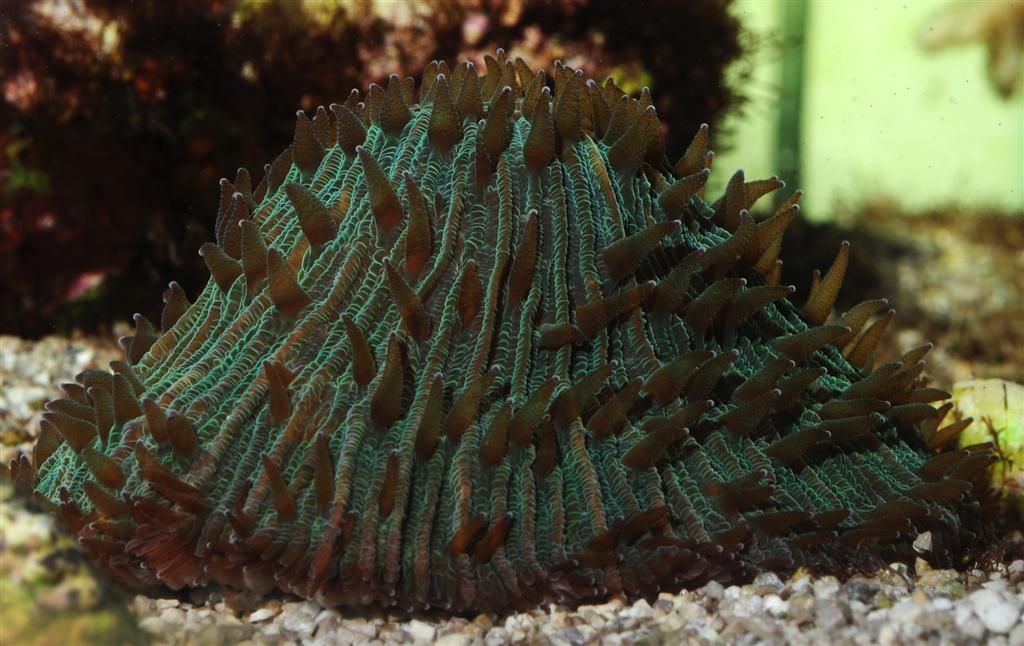 This solitary coral polyp (Cycloseris sp.) has large tentacles which transport prey items to the mouth, after which they are ingested and digested.

Over the last decade, research has also shown that corals gain essential nutrients from plankton feeding (reviewed by Houlbrèque and Ferrier-Pagès 2009). Zooplankton, for example, although not abundant on reefs, is a major source of organic nitrogen and phosphorous. By using their tentacles, armed with powerful nematocytes and sticky mucus, corals capture small crustaceans such as copepods which are rich in proteins and fatty acids. Zooplankton feeding is especially relevant in aquaria, as high prey concentrations can be reached easily by dosing live cultures to the water. When corals are regularly fed with rotifers (Brachionus plicatilis), brine shrimp (Artemia salina) or copepods (Tigriopus californicus), their growth can be greatly enhanced. This includes both soft tissue synthesis and calcification, the production of the coral exoskeleton. However, research has also revealed that the short- and long-term effects of zooplankton feeding on coral growth are inconsistent. 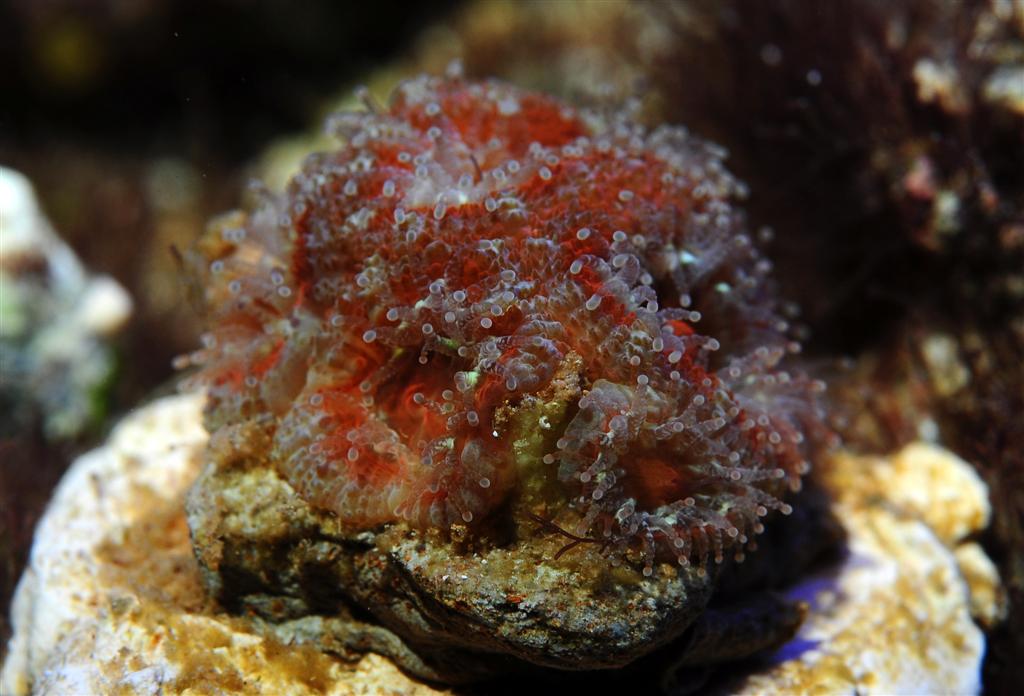 Coral polyps are well equipped for hunting. The bulbous tentacle ends of this Acanthastrea lordhowensis are packed with powerful nematocytes, which fire harpoons carrying paralyzing venom into crustaceans that venture too close.

Although the beneficial long-term effect of feeding on coral calcification is very clear (reviewed by Houlbrèque and Ferrier-Pagès 2009), the short-term effects can be the exact opposite (Al-Horani et al. 2007; Colombo-Pallotta et al. 2010). A possible explanation for this discrepancy is that impairment of calcification resulting from zooplankton feeding is caused by a reallocation of energy, for example to prey capture. By investing energy into prey capture, which requires muscle contraction and mucus secretion by polyps, corals may temporarily stop calcifying. In other words, corals may be unable to allocate sufficient oxygen and organic compounds to produce the required energy for calcification while they are actively feeding. If oxygen would be the limiting factor, one would expect that feeding does not negatively affect calcification during daytime, when algal photosynthesis produces oxygen for the coral. Indeed, only under dark conditions have negative effects of feeding been reported (Al-Horani et al. 2007; Colombo-Pallotta et al. 2010). In addition, Rinkevich and Loya (1984) and Colombo-Pallotta et al. (2010) found that adding oxygen to the water enhances dark calcification rates of Stylophora pistillata and Montastraea faveolata, respectively. This supports the theory that oxygen limitation may indeed be the culprit behind decreased growth rates when corals are fed at night. As coral aquaculture is gaining importance, it would be relevant to determine whether this short-term impairment of coral growth can be avoided by feeding corals during the day, when the lights are on and photosynthesis is active.

Coral growth during feeding – do light and oxygen matter?

To understand what actually happens to corals when they are actively feeding, we decided to perform a series of experiments in our coral lab. To obtain an overview of the short-term effects of feeding in the presence or absence of photosynthesis, we measured light and dark calcification rates of the coral Galaxea fascicularis with and without zooplankton addition. To find out whether oxygen limitation is the culprit behind reduced growth during feeding, we measured the effects of zooplankton addition under a range of oxygen levels. To measure calcification rates, we used the so-called alkalinity anomaly technique (Smith and Key 1975; Chisholm and Gattuso 1991). We incubated colonies (N=4) in respiration chambers for 6 hours, in light (PAR of 250 µmol m-2 s-1) or in complete darkness, with (150 nauplii per polyp) or without Artemia nauplii, at oxygen saturations of 13, 50, 80, 110, 150 and 280% (or 0.87; 3.33; 5.33; 7.33; 10.00 and 18.67 mg L-1 O2, respectively). This gave us a total of 24 different treatments (2 x 2 x 6) using the same corals. We always allowed the colonies to rest for at least 48 hours between treatments, to minimize stress as much as possible. We maintained stable oxygen saturations during all incubations by constantly blowing small amounts of pure nitrogen, oxygen or air into the water, depending on the treatment. The temperature was kept stable at 26±0.5°C by pumping water through water jackets surrounding each incubation chamber, which was heated or cooled depending on ambient conditions. Other water parameters, including calcium, pH, salinity and nutrients, were kept as stable as possible. By measuring the decrease of seawater alkalinity-a measure of the buffering capacity of a solution-during the six-hour incubations, we were able to calculate the amount of calcium carbonate skeleton produced by the corals. 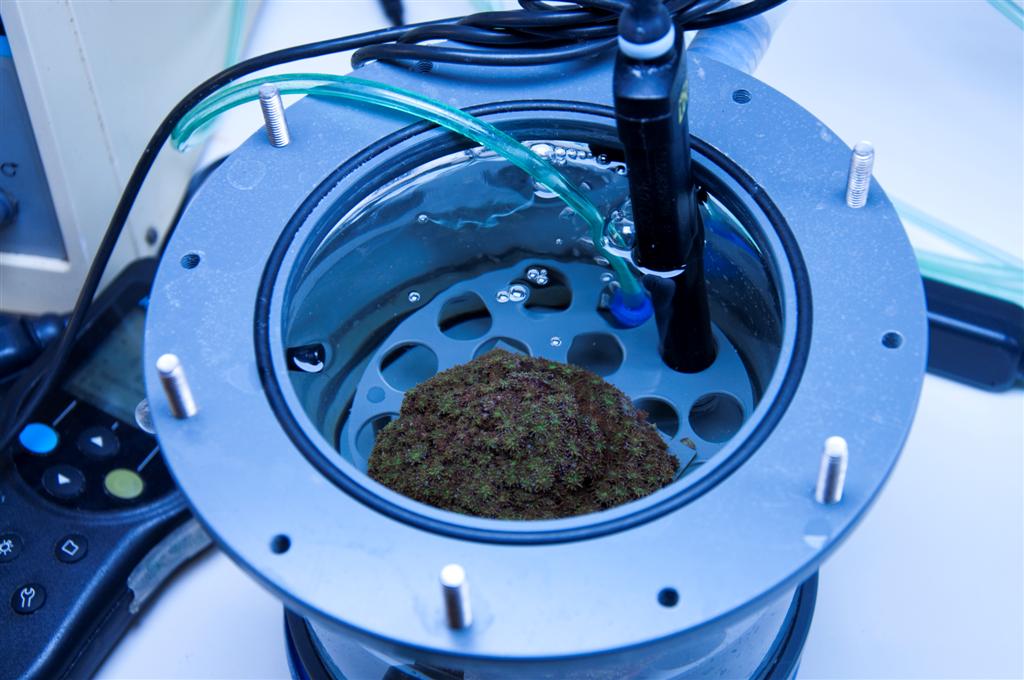 The figure below provides an overview of the experimental results. It immediately reveals that the effect of feeding on coral growth depends on ambient conditions, in terms of available light and oxygen. In light, coral calcification was only marginally affected by feeding. In fact, at an elevated oxygen saturation of 150%, corals calcified even faster. When the oxygen level got even higher (280%), however, calcification was negatively affected by feeding. In total darkness, this picture was very different. No matter how much oxygen we provided, corals showed very low calcification rates when they were actively feeding on zooplankton. At 150% saturation, we even measured a slight decalcification during feeding. Without zooplankton supplementation, on the other hand, dark calcification was quite high at normal oxygen levels. How can we explain these results?

Apparently, our theory that oxygen is limiting corals to calcify when fed in darkness was not supported by the data. Even at 280% oxygen saturation, there was no beneficial effect on dark calcification rates. Either oxygen was sufficiently available during feeding in darkness, or a different process was preventing corals from calcifying. After having refuted our own hypothesis, we decided to return to the available literature, and we found that corals can greatly increase their metabolic rates during and after feeding. When fed with Artemia nauplii, coral respiration rates quickly increase by approximately 2.5-fold (Szmant-Froelich and Pilson 1984), which means they start producing a lot of additional carbon dioxide (CO2) by metabolizing organic compounds. This may have two reasons; corals need to produce energy to fuel muscle contraction during feeding, and/or they start burning the organic nutrients gained from digested prey. As corals can quickly digest Artemia, i.e. within 3-6 hours (Hii et al. 2009; Wijgerde et al. 2011), this process may have occurred during the six-hour incubations. Could it be possible that these increased respiration rates caused the coral tissue to acidify? If that were true, it could severely affect calcification as this process is thought to be highly sensitive to tissue pH (Furla et al. 2000; Al-Horani et al. 2003). 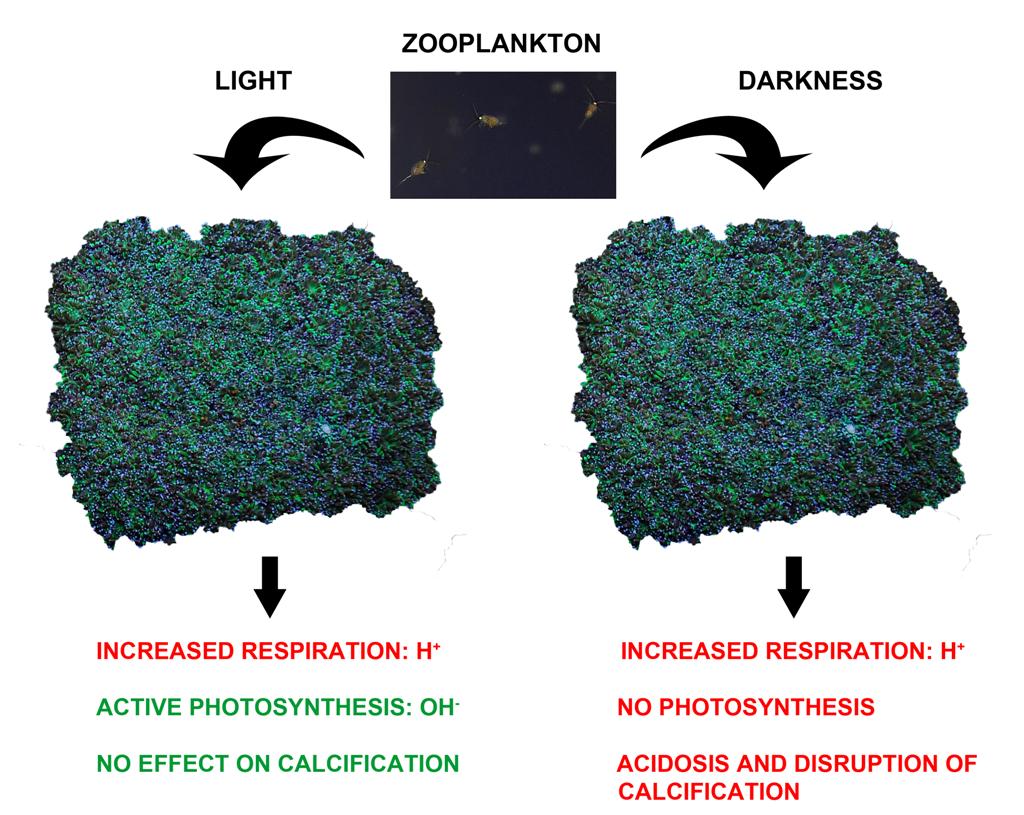 Hypothesized effects of feeding under light and dark conditions. Feeding increases metabolic rates, CO2 production, and as a result proton production in coral tissue. In light, these protons are neutralized by photosynthetically generated hydroxide ions. In darkness, protons accumulate in coral tissue. This temporarily slows down calcification, as this process is sensitive to decreased pH.

This is what we now think happens to corals when they are fed in darkness: during feeding, corals increase their respiration rates, causing CO2 to build up in their tissues. This quickly leads to a decrease in tissue pH, as CO2 reacts with water to form carbonic acid (H2CO3), which in turn, splits into bicarbonate (HCO3–) and protons (H+). The latter ions actually decrease tissue pH, and when this occurs around the skeleton, calcification rates are reduced (Al-Horani et al. 2003). Corals may then respond by reallocating energy to other processes such as soft tissue growth, as this could be energetically favorable. During the day, something different occurs. During this period, photosynthesis is active as zooxanthellae use the available (artificial or natural) light. Photosynthesis is known to produce hydroxide ions (OH–), the molecular counterpart of protons. These ions increase pH, and are able to neutralize protons produced during respiration (Furla et al. 1998). When photosynthesis neutralizes the negative effect of respiration on pH, calcification may not be disrupted. The diagram below summarizes the hypothesized effects of feeding in light and darkness. To confirm this new model, micro sensors could be used to measure the pH inside coral tissue and around the skeleton before and during feeding, in both light and darkness.

Our results indicate that coral growth in the wild may be much more variable than previously thought, as zooplankton feeding and oxygen have profound effects on calcification. We do not yet know, however, how high coral feeding rates have to get to actually disrupt calcification. The prey concentrations we used are only found under aquaculture conditions, although on reefs, corals can feed on bacteria and phytoplankton as well, which seem to be more abundant in the wild compared to filtered aquarium water (Feldman et al. 2011). Future research will have to determine the dose-response relationship between feeding and dark calcification rates. As nocturnal feeding may negatively affect coral growth, it seems puzzling that in the wild, many coral species expand their tentacles to feed at night. A possible explanation for this phenomenon is that at night, zooplankton concentrations are significantly higher than during the day (Holzman et al. 2005; Yahel et al. 2005a,b). The concentration of copepods, for example, can increase fivefold at night (Yahel et al. 2005a). As plankton is a source of essential nutrients, the inhibition of calcification during the night may be outweighed by the nutrition corals gain from feeding.

In addition, the dramatic effect of oxygen on calcification is highly relevant to coral ecology. Until now, reef formation has been split into two daily phases; light and dark calcification. It has long been known that in light, when photosynthesis is active, coral calcification is enhanced, a phenomenon known as light enhanced calcification (Kawaguti and Sakumoto 1948). However, the effect of oxygen saturation has not been taken into account. Field data show that the oxygen saturation on reefs can fluctuate dramatically, especially in lagoons during low tide, when there is little water exchange. Oxygen saturations can easily drop to 30% during nighttime, and peak at 194% during the day (Kinsey and Kinsey 1967; Kraines et al. 1996). In addition, the interface between corals and the surrounding water becomes anoxic (down to 1 % saturation) at night, and hyperoxic (up to 373% saturation) during the day (Shashar et al. 1993; Wangpraseurt et al. 2012). This suggests that corals become oxygen-limited at night, and intoxicated by high oxygen saturations during daytime, resulting in reduced growth rates. As many reef waters are polluted by human activity, enhancing the growth of algae, fluctuations in oxygen saturation due to higher photosynthesis and respiration rates may increase in the future. This will put even more pressure on coral reefs, which are already confronted with global warming, ocean acidification and overfishing. 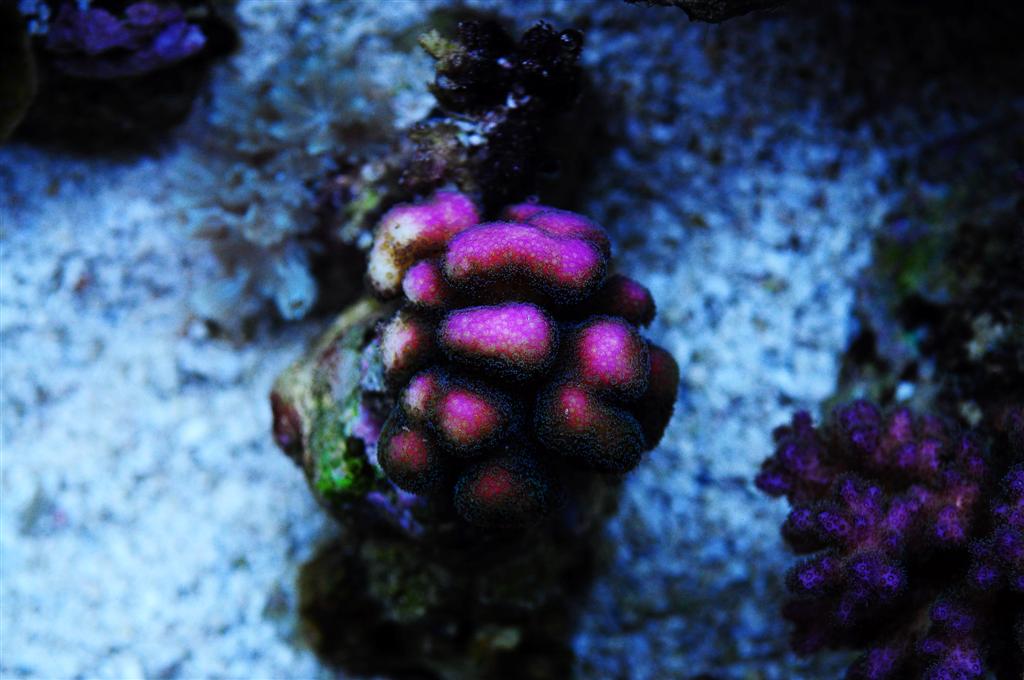 Corals may grow faster when they are fed during daytime.

The implications for coral aquaculture and the aquarium hobby seem clear. When scleractinian corals are fed during daytime (i.e. when the lights are on), a nightly disruption of calcification may be prevented. In addition, maintaining a high oxygen concentration in the aquarium is vital as corals seem sensitive to low saturations, both in light and in darkness. Fortunately, foam fractionators are an ideal means of aerating the water (although they do seem to remove food particles from the water). For those seeking to grow corals efficiently, these insights are highly relevant as the aragonite skeleton accounts for the bulk of coral biomass (Davies 1989).