Aquarium Fish: An Overview of Clownfish of the Tomato Complex

Clownfish (Subfamily Amphiprioninae) have for long held a special interest among marine aquarium hobbyists. Due in large part to the increasing availability of rare species, as well as novel strains of more familiar species, clownfish are every bit as popular today as ever before. With the growing selection of clownfish varieties, it is becoming ever more evident that there are very important differences and similarities between members of the subfamily. A basic understanding of these distinguishing characteristics will likely help those who wish to keep these fishes to provide ideal captive care.

The tomato clownfish and their kin are best known by aquarists for their hardy, rugged, fearless, pugnacious, character. They are both revered and reviled for these traits. Most often, however, they are simply taken for granted-utilized as cheap, burly “starter fish” that are inevitably discarded as they begin to outgrow and overpower the cohabitants of the “community” tank. It would seem that the only thing that can kill a tomato clownfish is another tomato clownfish.

Members of the Tomato Complex are relatively easy to breed in captivity; it is not uncommon for different species of the complex to interbreed. The young eagerly accept food and can tolerate degraded water quality. Indeed, the greatest challenge here is not in providing adequate nutrition and living conditions, but rather in curbing aggressive behavior amongst grow-out stock or even amongst the breeding pairs themselves. 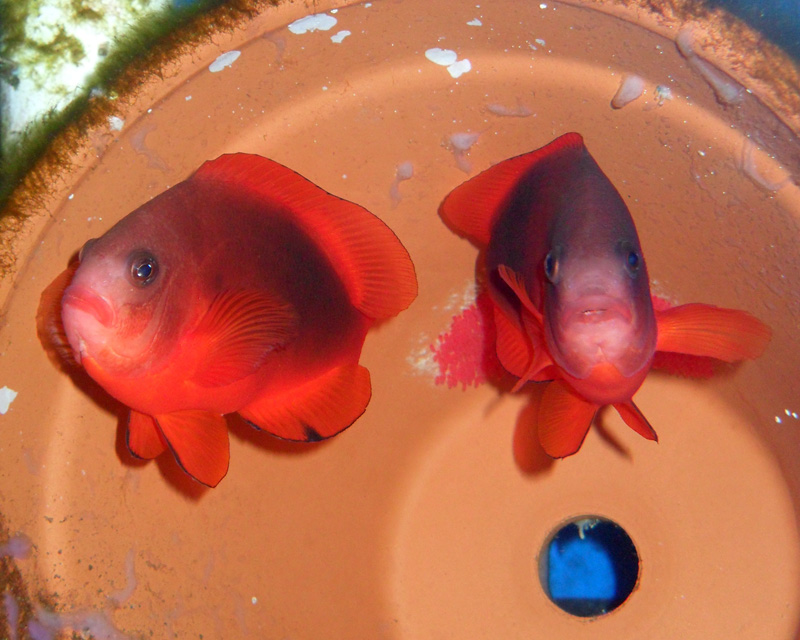 Stripeless at maturity, Amphiprion ephippium possesses an austere beauty of its own. Photo by Kenneth Wingerter.

The Tomato Complex in profile

The red saddleback clownfish occurs in turbid waters throughout the Indian Ocean, but is particularly abundant from Thailand to Indonesia (tropical). It is typically associated with the sea anemone species Entacmaea quadricolor and Heteractis crispa. This species is believed by some to be highly intolerant to copper-based medications, though some anecdotal evidence has suggested otherwise. It has a yellowish or reddish orange base color with a dark blotch on its flank that grows as the individual matures. It is distinguishable by its complete lack of striping; juveniles do, however, bear prominent white stripes. It reaches a maximum length of 14 cm. 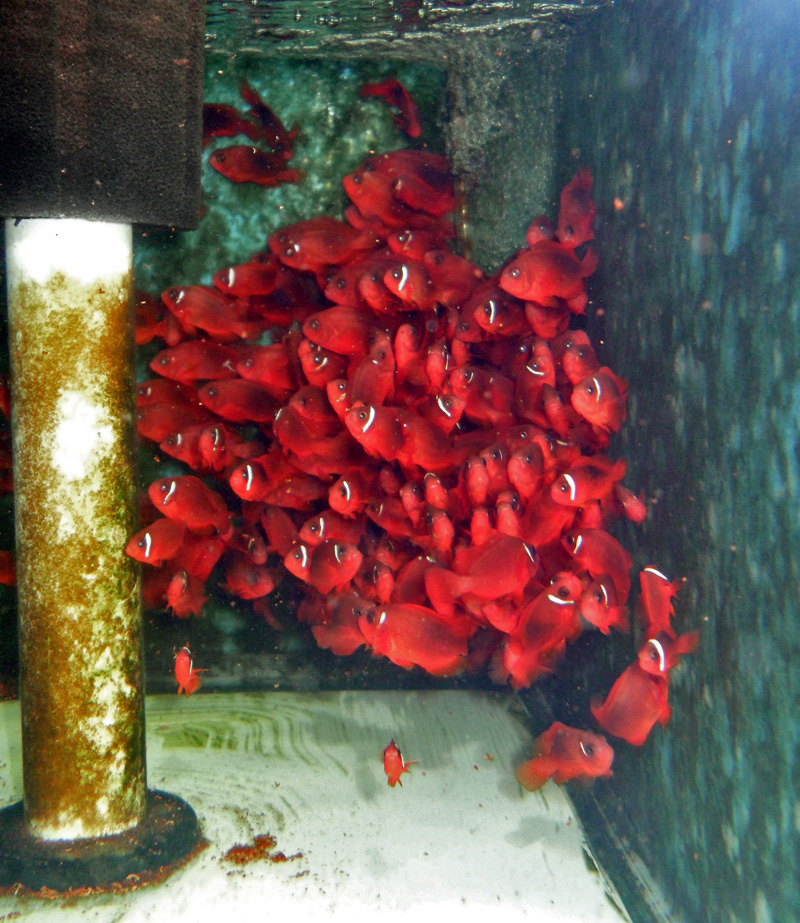 Clownfishes of the Tomato complex (such as these juvenile Amphiprion ephippium) tend to lose stripes with age, in contrast to species from the other complexes. Photo by Kenneth Wingerter. 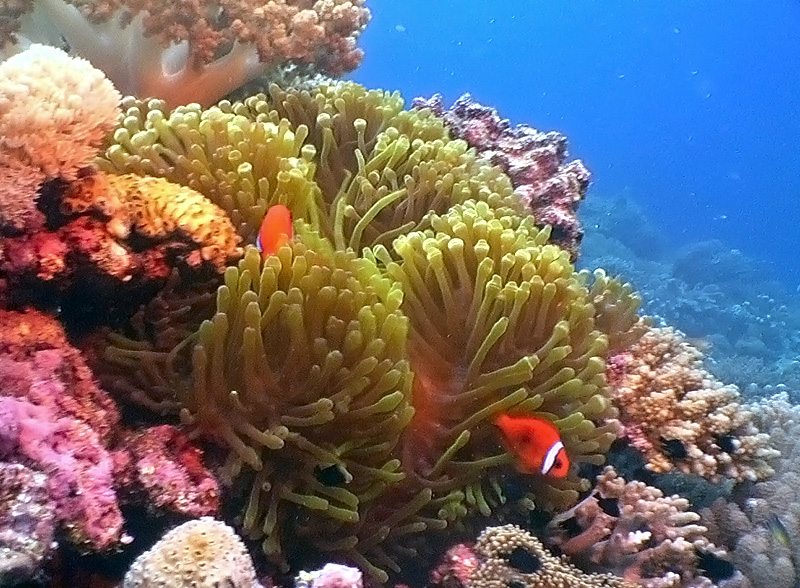 Even in the midst of a spectacular reef, the interaction between a sea anemone and a pair of clownfish (such as these Amphiprion frenatus) is eye-catching. Photo by Albert Kok.

The tomato clownfish occurs in bays and lagoons throughout the Western Pacific Ocean (tropical). It is typically associated with the sea anemone species Entacmaea quadricolor. This is a very rugged species that is easily housed and fed in the typical home aquarium of 40-gallons or more. It has a base color that ranges from dusky orange to bright red. Juveniles bear three white stripes, though their body stripes and head stripes gradually recede with growth. As they mature, females darken from head to tail. Females can be considerably larger, often reaching a maximum length of 14 cm. 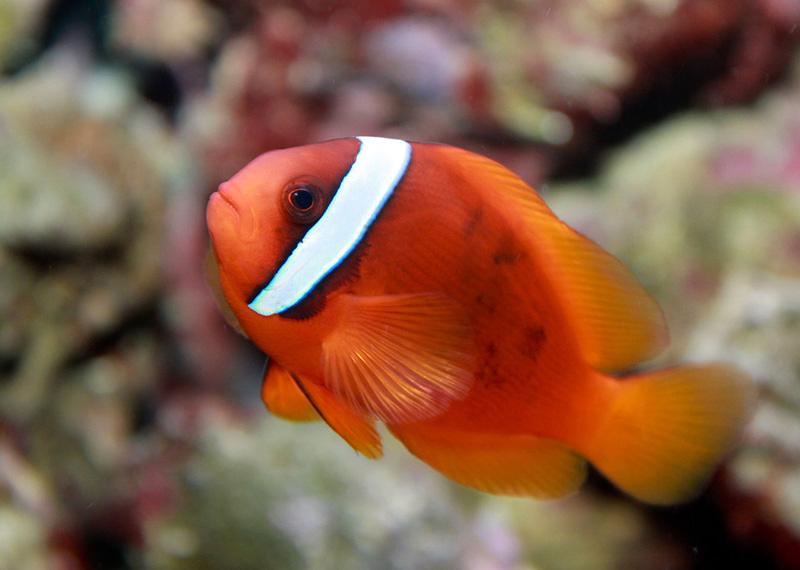 Because clownfish of the Tomato Complex can be quite intolerant of each other’s presence, great caution is advised when stocking multiple individuals in the aquarium. Photo by Brian Gratwicke. 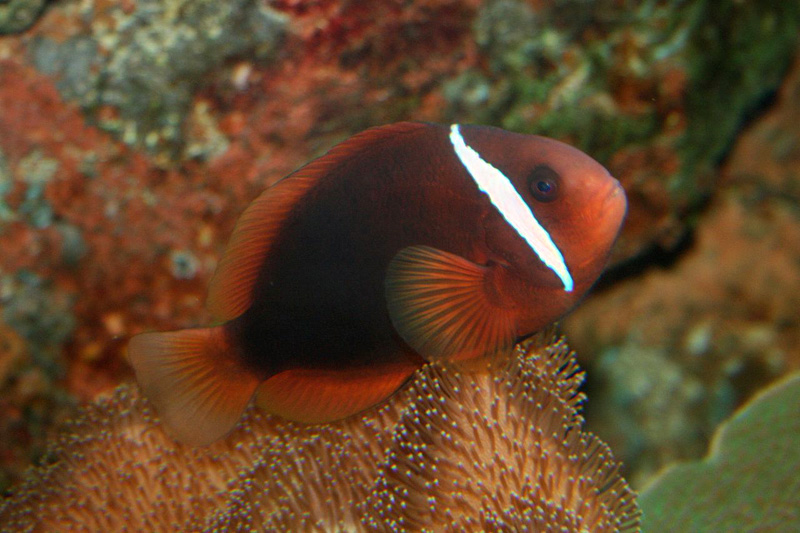 Female Amphiprion frenatus darken in color as they mature. Photo by Lonnie Huffman. 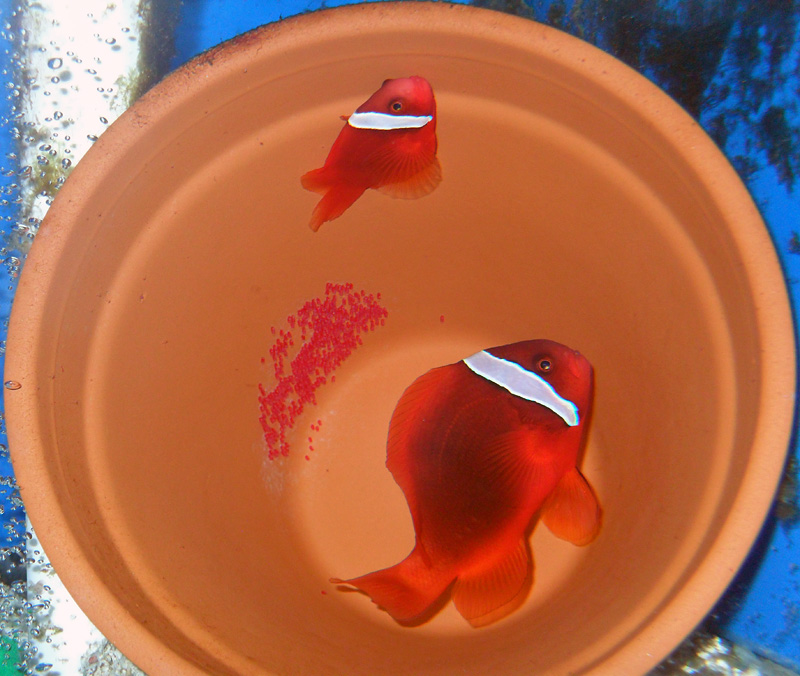 Breeding pairs of clownfish (such as these Amphiprion frenatus) fiercely guard their nests. Photo by Kenneth Wingerter. 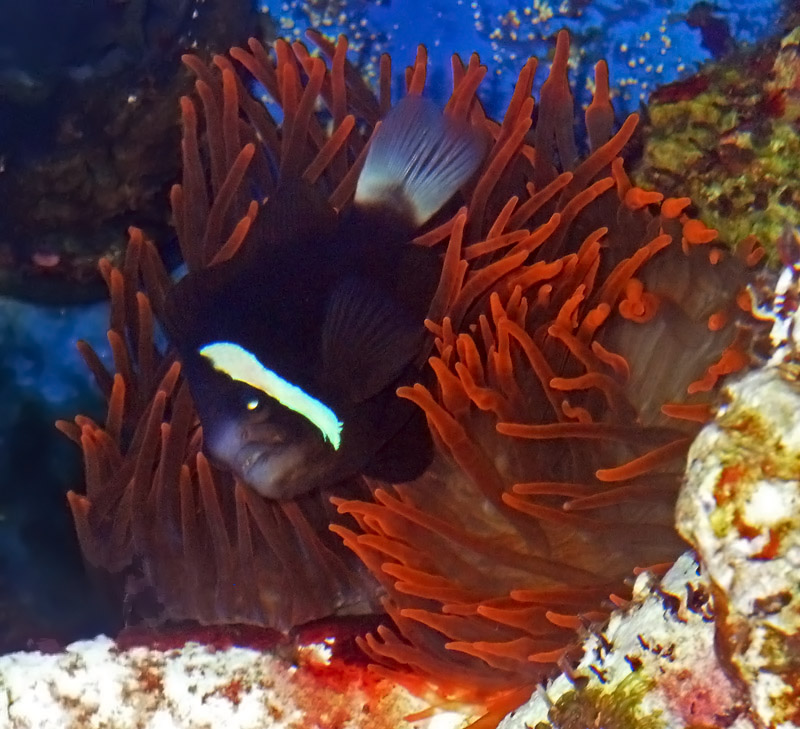 McCulloch’s clownfish is restricted to lagoons and rocky reefs in the Lord Howe Island Group off of Eastern Australia (subtropical). Recorded as a World Heritage Site, these waters are protected as part of the Lord Howe Island Marine Park; only a handful of tank-bred specimens of this unique fish are presently available. Though it has been successfully maintained in captivity at temperatures as high as 78 degrees Fahrenheit, a range of 63-76 degrees Fahrenheit might be more appropriate. It is typically associated with the sea anemone species Entacmaea quadricolor. It has a dark brown or black base color (though with a much paler face) with an ill-defined white head stripe and white tail. It reaches a maximum length of 12 cm. 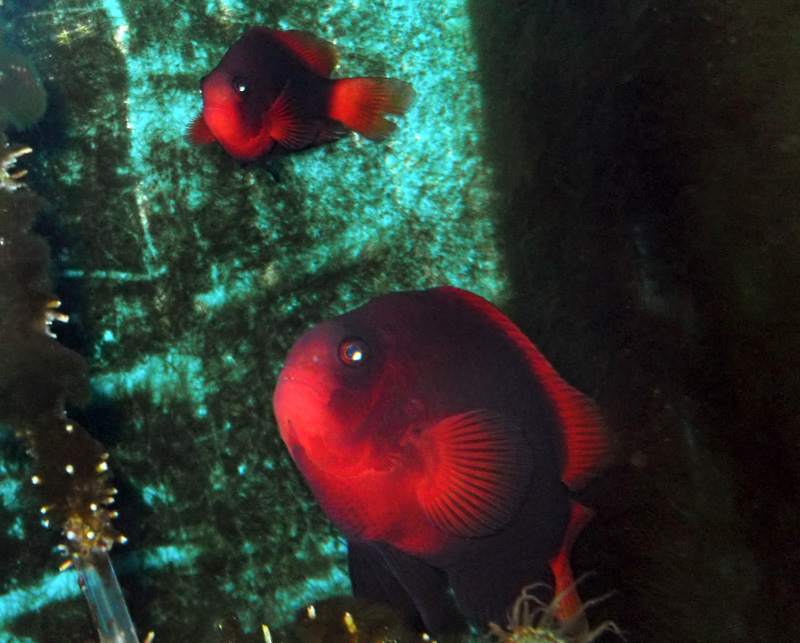 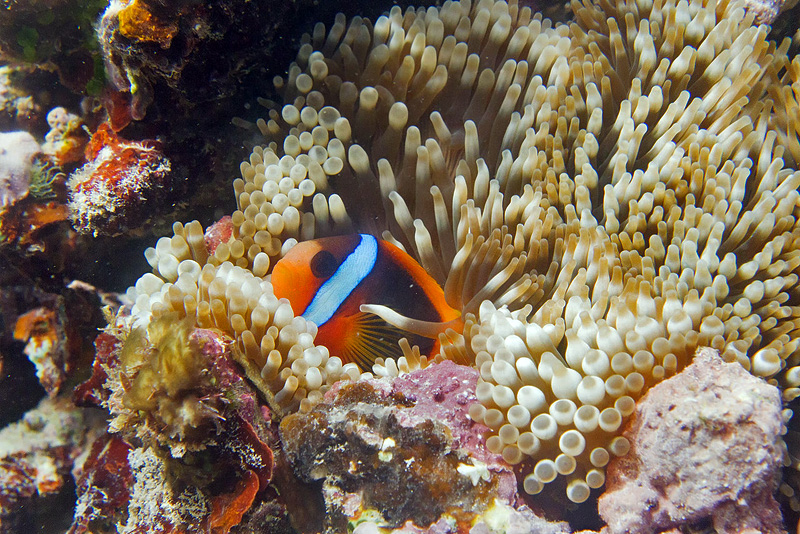 Some color forms of Amphiprion melanopus can have substantially darkened areas over the body and fins. Photo by JJ Harrison. 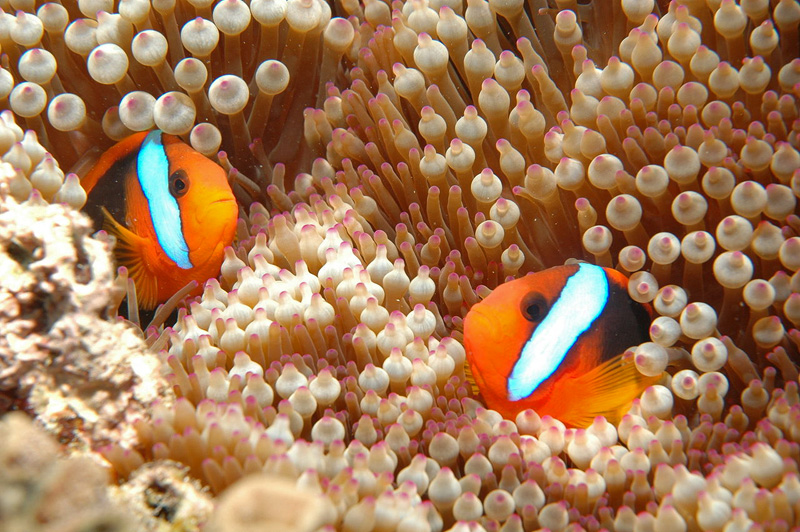 An attractive pair of Amphiprion melanopus. Photo by Leonard Low. 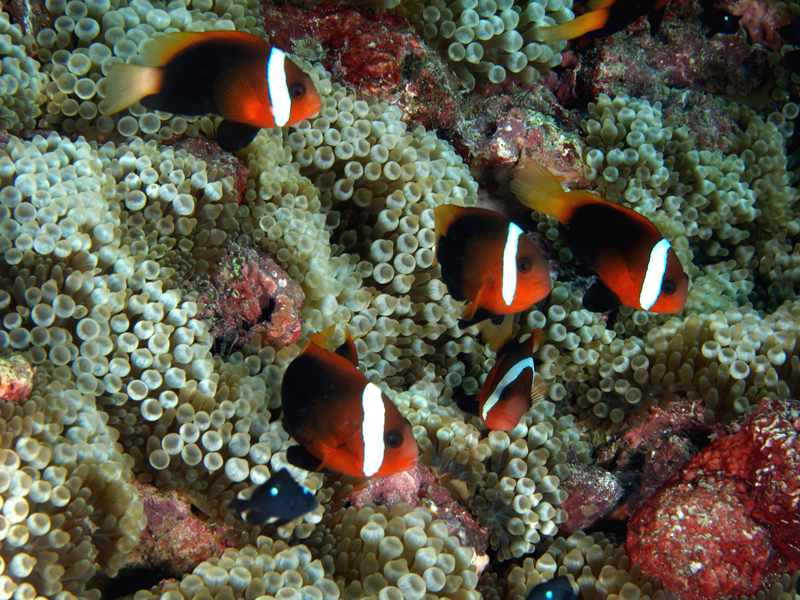 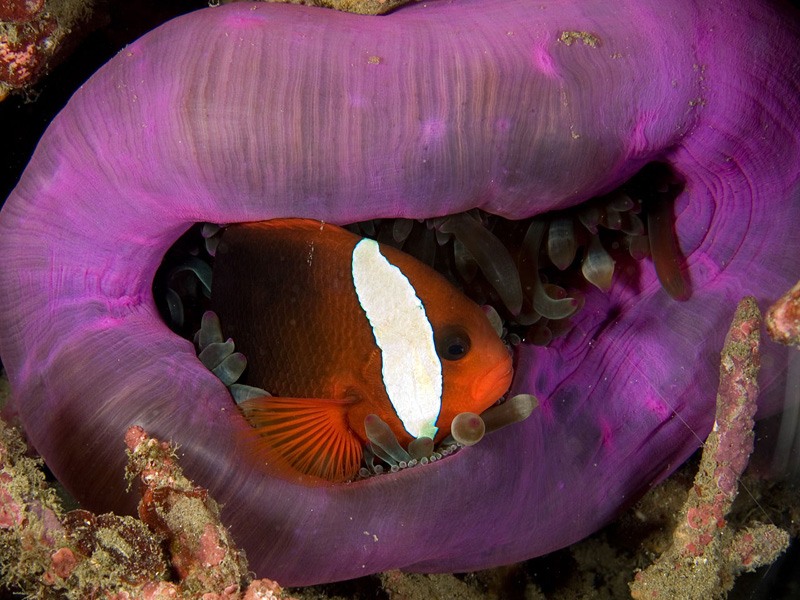 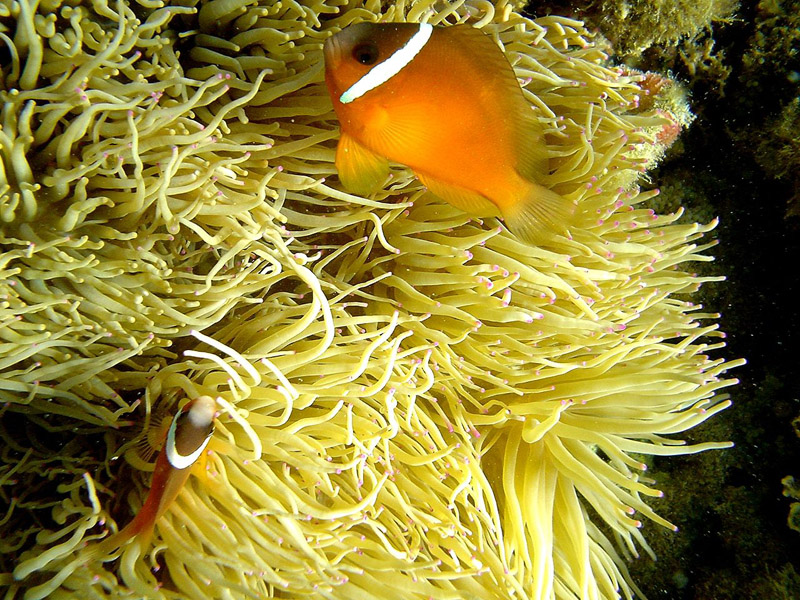 Originally identified by the photographer as Amphiprion melanopus, these individuals may actually be what are now known as Amphiprion barberi. Photo by Mila Zinkova. 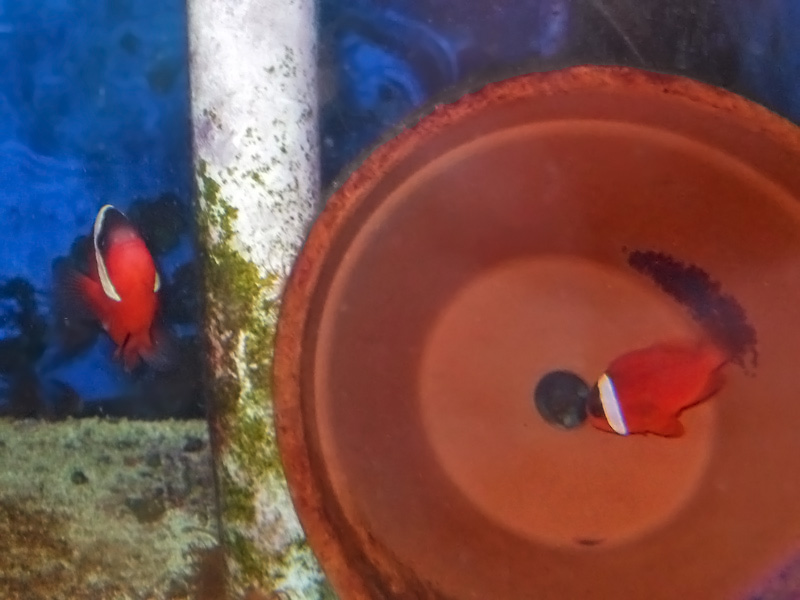 The Australian clownfish occurs mainly in shallow coastal reefs and lagoons along the northern Australian coast (subtropical). It is typically associated with the sea anemone species Entacmaea quadricolor and Stichodactyla gigantea. It has a dusky orange base color with a reddish orange nose, abdomen, and fins. While some have reported that this species is not quite as hardy as the very similar tomato and cinnamon clowns, most would agree that it is nevertheless an exceptionally adaptable aquarium fish. It is distinguishable by the relatively thin black outline around its white head stripe. It reaches a maximum length of 12 cm.

An awareness of how each complex within the clownfish subfamily differs from one another can help one to select the most appropriate species for the home aquarium. The Tomato Complex arguably claims some of the most durable marine aquarium fish species, being capable of withstanding suboptimal water quality, inadequate nutrition, and careless handling (that being said, it is certainly not advisable to subject them to poor living conditions). Due to their powerful bodies and belligerent temperament, they are well suited for a community of larger, more aggressive species. As such, members of this complex are undoubtedly the best choice of clownfish for hobbyists (novice and advanced alike) that have a fondness for outstandingly bold, cantankerous fishes.

Amphiprion rubrocinctus has rather thin edging at the margins of the stripes. Photo by www.sustainableaquatics.com.

Aquarium Fish: An Overview of Clownfish of the Saddleback Complex

Aquarium Corals: A Look at the Sun Corals