Over the years I’ve experimented with many angelfish in reef aquariums. Based upon my experiences, I have a pretty good idea of the tendencies of these fish. I use the word “tendencies” because the behavior of fish in reef aquariums can be unpredictable, even within the same species. For example, right now I have a scopas tang ( Zebrasoma scopas ) that recently began grazing on the mantles of Tridacnid clams in my 500 gallon reef aquarium. I’m going to have to remove it before the clams die. I only just removed a wrasse ( Halichoeres melanurus ) that I had in the same aquarium for many years for the same reason. I’ve had a sailfin tang ( Zebrasoma desjardinii ) that suddenly began eating Xenia to the point where it was wiped out from my aquarium! I caught my powder blue tang ( Acanthurus leucosternon ) nipping at the tips of some Xenia elongata the other day. Now I know why it never opens fully anymore!

In my experience, the corals that are most susceptible to be picked on by the various species of angelfish are the large-polyped stony corals (LPS). Examples include open brain corals ( Trachyphyllia geoffroyi ) and species in the genera Symphyllia, Lobophyllia, Fungia, Scolymia, and Cynarina. Tridacnid clams are also commonly picked on by angelfish. The typically don’t eat the tissue of the corals and clams, but feed upon the surface mucus. Unfortunately that’s enough of an irritation to cause the coral and clams to withdraw their polyps and mantles. If it’s allowed to continue to for an extended period of time, the corals and clams will deteriorate and ultimately die.

The corals that are least likely to be picked upon are the more noxious soft corals, such as the assorted mushroom corals ( Actinodiscus, Rhodactis and Discosoma species). Corals from the genera Alcyonium and Cladiella are also rarely harassed. Again, this is probably due to the noxious mucous that’s exuded by these corals. 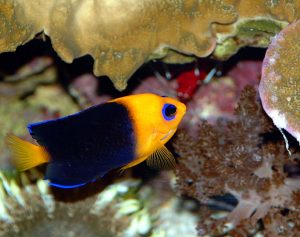 Let’s start with the dwarf angels (genus Centropyge ). Since they remain relatively small, they are a popular choice for reef aquariums. The Potter’s angel ( C. potteri ) is a Hawaiian endemic that doesn’t adapt well to captivity. The specimens that I’ve observed in reef aquariums have been “pickers” on clams and SPS corals, so this is not a species that I would generally recommend. The sometimes similar-looking coral beauty ( C. bispinosa ) is a more hardy fish and is frequently reported as “reef-safe.” I would rate this fish as 50-50. The deep-water golden angel ( C. aurantia ) is another delicate beauty and very difficult to adapt to life in an aquarium. The specimen I had picked at zooanthids but didn’t bother Tridacnid clams. This is another fish that I would not recommend. The lemonpeel ( C. flavissima ) and Herald’s angel ( C. heraldi ) are notorious “pickers.” I can’t recommend them for inclusion in any aquarium containing corals and clams. The same goes for the bicolor angel ( C. bicolor ). There’s little this fish won’t pick on; including other fish! 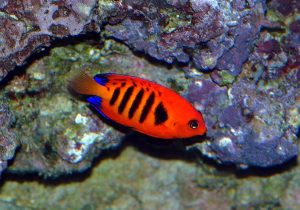 I haven’t personally kept a Hotumatua angel ( C. hotumatua ), but based upon it’s similarity to the joculator angel ( C. joculator ), I would classify it as a very good choice for a reef aquarium. Although they’re expensive, these are tough little fish that do very well in captivity. I have a joculator angel for 8 years now in a mixed reef aquarium and it has never harassed a coral or clam. It can be a nasty fish in a small aquarium though, so I would consider adding it after smaller and more delicate fish have established themselves in the aquarium.

The Brazilian ( C. aurantonota ) and African ( C. acanthops ) flameback angels, as well as the cherub angel ( C. argi ), are reasonably good choices for reef aquariums. They may sample the mucus from a coral here and there but do little to no damage. In addition, they’re as tough as nails. This is another angelfish that’s a little pugnacious. Smaller and more delicate fish may be picked on unmercifully.

The flame angel ( C. loricula ) is an enigma. Some are completely reef safe; some are reef terrors; some become reef terrors after years of good behavior. I don’t know what to tell you about this popular fish. I have one in my large 500 gallon reef and it picks on one large “fuzzy” Acropora coral but nothing else. The bottom line is that it’s a risk. Chances are that if it does bother a coral, it will be a particular coral and then you’ll have to make the choice of the coral or fish. 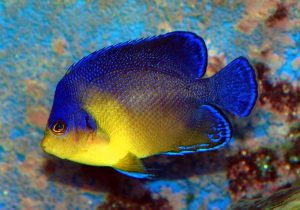 I once kept the closely related Paracentopyge venusta angelfish in an aquarium with soft corals and clams, and it didn’t show an interest in anything. This is a limited experience, but it’s a fish I’d be willing to take a chance on again.

Angels in the genus Chaetodontoplus are good reef candidates because they remain relatively small and peaceful in the aquarium. Unfortunately, they’re somewhat risky and may pick at LPS corals and certain soft corals. The recently available blue-stripe angel ( C. septentrionalis ) is a beautiful fish but rather difficult to adapt to aquarium life. I kept a juvenile specimen with soft corals, including Xenia, and clams without incident, but my experience is too limited to come to any conclusions. I would classify it as a reasonable risk. Although I haven’t kept one, I observed enough conspicuous angels ( C. conspicillatus ) in reef aquariums to conclude that they’re not entirely reef safe. While they didn’t destroy anything, they did pick on zooanthids and soft corals to the point where the corals did not open. Again, it’s a choice you’ll have to make as an aquarist. Personally, if I could afford one, I’d take the fish over the potential few corals it will pester.

Scribbled angels ( C. duboulayi ) can be difficult to get eating well in captivity. They often waste away despite eating prepared foods. The bulk of their diet is sponges and tunicates, but it will pick at soft corals. I’d pass on this fish as a reef aquarium resident. It’s not worth the risk, especially considering its frailty. 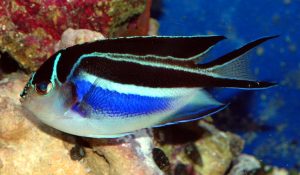 The Apolemichthys angels are similar is size and habits to the Chaetodontoplus, in my experience. I had a flagfin angel ( A. trimaculatus ) for a few years and it grew from about two inches to five inches. It didn’t bother anything when it was smaller but started picking at soft corals as it got larger. I had the exact same experience with the magnificent goldflake angel ( A. xanthopunctatus ) and had to give it away when it became a destructive adult. Based upon these experiences, I can’t recommend these fish in a reef aquarium with LPS corals and clams.

The Genicanthus angelfish are as close to reef-safe as it gets. They are all mid-water planktivores and rarely pick at benthic invertebrates. I’ve kept G. bellus, G. melanospilos, G. watanabei, and G. semifasciatus. I’ve had G. bellus for many years and it’s my favorite in this genus. Not only has it proven to be completely reef-safe, it is a tough fish that does very well in captivity. Similar to all the Genicanthus angels, it must be fed multiple times per day in order to thrive. In this requirement, they’re similar to Anthias. I have to relate that I did have a bad experience with a pair of G. watanabei angels in my old 120 gallon reef aquarium. Both fish started picking at Acropora corals and had to be removed. I wouldn’t take a chance with the species again, but I know other reef aquarists keeping them without a problem. 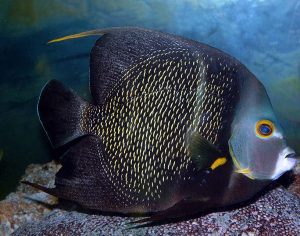 The Pomacanthus angels are the ones that get the most questions, and this is probably because they’re the most desirable angels. They’re big, bold and beautiful fish. Unfortunately, I’ve yet to find one that I would consider reef safe. I grew both P. asfur and P. maculosus angels from juveniles to sub- adults in reef aquariums and they exhibited the same behavior as the Apolemichthys and Chaetodontoplus angels. As they grew larger, they began picking at some soft corals and occasionally Acropora corals. They never ate corals or damaged them seriously, but they’re intermittent pecking was enough to keep the corals closed all the time. I do know someone with a P. maculosus angel in a 700 gallon aquarium for many years and it’s been a model resident, so I wouldn’t dismiss this fish completely. There is a blue-girdled angel ( P. xanthometopon ) in this same aquarium with SPS corals, LPS corals, and clams, and it doesn’t bother a thing. It’s been in there at least four years now.

I’ve tried to keep the irresistible P. navarchus in reef aquariums on at least three occasions. Each time I met with failure. Every one eventually turned to picking at LPS corals and clams. I have kept juvenile emperor angels ( P. imperator ) without incident but I can’t speak of the adult fish. I do know many aquarists keeping these fish successfully in reef aquariums with SPS corals and the consensus has been that the fish are well-behaved. I had a blue-ringed angel ( P. annularis ) for a short time in a 100 gallon mixed reef aquarium. It ignored SPS corals or clams, but eventually started picking at soft corals (particularly Lemnalia ). 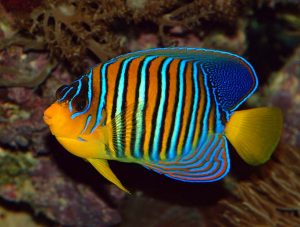 I’ve experimented with juvenile French angels ( P. paru ) a few times as well and this is another fish that I would strongly avoid in a reef aquarium. Even though they don’t eat corals in the wild, they tend to sample EVERYTHING in an aquarium. This fish is about as bad as it gets in a reef.

My favorite large reef angel is the regal ( Pygoplites diacanthus ). I’ve had great success with this fish in reef aquariums. One that I had for almost 10 years died recently, but it never picked at a coral or clam in that entire time. I’ve had another regal angel (also a Red Sea variant) for almost a year now and it’s also well-behaved. In fact, this one even eats flake food! I’ve heard stories of regal angels picking at Xenia and Acropora corals, but I suspect that these are in the minority. In my opinion, if you can get a healthy specimen that’s eating well, it’s a good risk in a reef aquarium. Look for a Red Sea/Indian Ocean variant. They tend to be hardier and prettier than the Indo-Pacific variety.

Angels in the genus Holacanthus are large, belligerent fish that are not appropriate for a reef aquarium. I know a few aquarists keeping juvenile queen angels ( H. ciliaris ) in reef aquariums, but this will turn out to be a short-term experiment. These fish are best kept with larger, aggressive fish in FOWLR (Fish Only With Live Rock) aquariums.

I’ve noted that keeping food available at all times reduces the tendency of certain fish to pick at corals and clams. I use dried macroalage rolled onto a rock or held by a clip to satisfy the grazing and picking habits of many angels and tangs. You’d be surprised at how well this works.