Recently, live rock has begun to be exported from The Republic of Ghana, in West Africa to various countries around the world apparently due to a competitive pricing structure compared to existing sources. Along with these shipments of live rock, a few shipments of fishes endemic to this region were also sent. Although the tropical Eastern Atlantic does not have the fabulous coral reefs of the Pacific or Caribbean, there are a number of fish from this region that are of interest to some advanced aquarists due to their relative rarity in the trade. Some of these fish are bound to become more popular with other home aquarists as their availability increases and their retail price subsequently decreases.

While it is not always possible (or even prudent) to characterize all fish available from a given region as being “good” or “bad” quality, certain assumptions regarding the relative condition of fish from different regions does seem evident (Hemdal 2006). Without doubt there are differences in quality between specific exporters from a single region, but can there be an overall “trend” in quality for a given region? Fish from Jakarta and Manila tend to arrive in United States a bit thin, and have higher than expected mortality rates, probably due to the collection techniques employed, such as sodium cyanide. Caribbean fish arriving from Haiti often seem weaker than the same species of fish collected in the Florida Keys. So far, it seems that the fish arriving in the U.S. from Ghana are in relatively good condition, and seem to be very hardy. This may be due in part to collection practices employed, but it may also be that fish from this region are simply sturdier than those from
some other areas, perhaps due to their environment which is marginal at best, and certainly not as pristine as oceanic reefs where many other aquarium fishes are collected. In an attempt to quantify this, a series of 20 fish from Ghana that were sent to a public aquarium in multiple shipments showed zero mortality for any unknown or disease-related reasons. The only mortalities seen in these fish after 40 days were two wrasses (Coris atlanticus) that were lost due to underestimating their ability to leap out of their holding tank and one cardinalfish that was lost due to interspecific aggression. This amounted to an overall mortality rate of 15%. This can be compared to mortality rates seen in typical tropical marine aquarium fishes imported from other regions that range from 12 to 60% over the same time frame (Hemdal 2006).

Despite the relatively unsophisticated techniques employed by the collectors and exporters in this region, the fish arrive at their faraway destinations in very good condition. Part of this is probably due to the sturdiness of the animals themselves – fish that live in marginal reef areas need to be hardy in order just to survive – but the rest of the equation is probably due to the use of nets to collect these fish as opposed to resorting to the use of he chemicals (such as sodium cyanide) that is still in widespread use in some other collecting areas. As an example, one African angelfish, (Holacanthus africanus) was imported and then re-shipped by a dealer and then was acclimated to a quarantine system. This fish was needed immediately as a “photo-model” for this article, so it was photographed in that system within two hours of its arrival. Most recently shipped fish require a long period of acclimation before they begin behaving normally. Not this angelfish – while
being photographed, it demonstrated the normal angelfish behavior when approached by a camera of moving away, and then turning broadside at the last moment. Unexpectedly, it would then swim back towards the camera and try to bite at the lens! This tiny, recently shipped angelfish showed more chutzpah than a similar angelfish that had been adapted to captivity for many years. 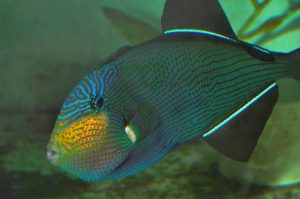 Aquarists working with fish from this region are quickly struck with how similar some species from West Africa are to those from other regions, such as the tropical Western Atlantic and the Mediterranean. The origins of many of the species from this region can be surmised based on the presence of similar “parent species” in adjoining bodies of water. All fish from the region can be categorized into one of the following categories:

Endemic
A species unique to the region. Examples of endemic West African fishes include the African angelfish, Holacanthus africanus, an unidentified Serranus sp. and the goldenheart triggerfish, Balistes punctatus. Many of these endemic fishes have doppelgangers, or close relatives, that they obviously evolved from.
From the Mediterranean
A species of fish originally found in the Mediterranean Sea, and having migrated to this region. Examples include the Swallowtail seaperch, Anthias anthias and one of the cardinalfish in the area, Apogon imberbis.
From the tropical Western Atlantic
These migrants from the Caribbean region are rarely shipped from Ghana, as they are less expensive to acquire from other regions. Species include the Spotfin (Cuban) hogfish, Bodianus pulchellus and the Creole fish, Paranthias furcifer.
From the Indo-Pacific region
Because the cold waters surrounding Cape Hope in South Africa block the movement of tropical fish from the Indian Ocean to the Atlantic, few fish from the region are also found in the Pacific. Most of the species capable of doing this are large, fast swimming pelagic species that can make the journey during the warm summer months. One exception is the only species of butterflyfish found in both the Atlantic and the Indian oceans, Chaetodon marleyi (Debelius 1997).
Wide-ranging Atlantic
Some species in the region are found throughout the Atlantic Ocean basin in both tropical and subtropical waters. The best example of this is the Doctorfish, Acanthurus chirurgus.
Circumtropical
Fish that are found throughout the tropical regions of the world such as the Black durgon, Melichthys niger, and the Scrawled filefish, Aluterus scriptus. These species usually have an extended larval period that allows the larva to drift in ocean currents for long distances before settling out as juvenile fish.
Unknown
The only relatives of the endemic Biafra sawtail surgeonfish, Prionurus biafraensis, are found in the East Pacific (Mexico south to Chile and the Galapagos Islands) and around Indonesia, (FishBase 2008) so this species does not have a distribution contiguous with any similar species, therefore its presence here is from an unknown parent population.
Waif
Since the mechanisms that allowed species to spread in the first place (such as ocean currents) are still at work today, it is not impossible that “waifs” will be seen from time to time, where single fish from another region are discovered. These are non-breeding populations (for the most part) and can easily go undetected. By far the most common mechanism enhancing the spread of species to new regions are human beings (as evidenced by hundreds of examples, including lionfish (Pterois volitans) in the tropical Western Atlantic). 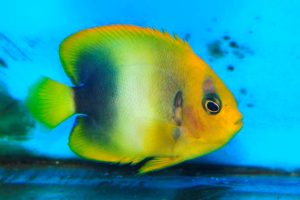 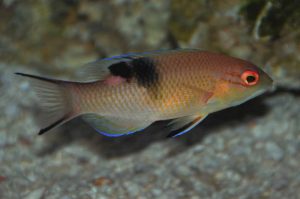 Invertebrates from this region are less commonly seen in the pet trade, but there are some colorful beadlet anemones (Actinia equina) available from time to time, as well as a very nice red reef lobster (probably Enoplometopus antillensis) (Russo 2008). With the proper CITES II permits, some Montastrea cavernosa coral has also been exported. Live rock exported from this region is from inshore areas and aside from purple coralline algae on some pieces, is fairly generic in its composition.