As a youngster I remember seeing a photo of the bluestripe angelfish ( Chaetodontoplus septentrionalis ) and falling in love with this fish. When I first started working in the aquarium trade, I insisted that the store owner order one these lovelies – it was even more beautiful than the photos I had seen! It was about 20 years later that I had an amazing opportunity to see dozens of these beauties in the wild, off the coast the Izu Peninsula, Japan. This wild encounter renewed my interest in this lovely pomacanthid.

In this article, I would like to share some observations and photos of C. septentrionalis. If you have not considered keeping one of these beautiful pomacanthids before, I think this piece may inspire you to do so!

The bluestripe angelfish is known from off the coast of Vietnam, Taiwan and China and ranges north to southern Japan (where it is quite common). In the 1970’s and early 1980’s, the bluestripe angelfish was sporadically available in the US aquarium trade. Then they disappeared. But in the last couple of years, it has showing up with some regularity again. The individuals that are showing up now are said to be captive-raised and are being exported from Taiwan. I have yet to determine if the adults are actually reproducing in large aquariums or if the larvae are being captured off the coast of Taiwan and simply being raised-up in captivity (it is probably the latter). In either case, larvae raised in captivity tend to be more durable than individuals captured and exported at larger sizes. 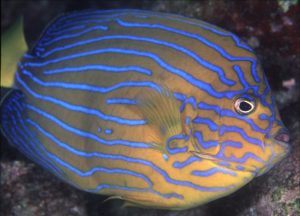 Fortunately for angelfish aficionados, the bluestripe angelfish is starting to show up in the trade with greater regularity.

Like many of the angelfishes, juvenile C. septentrionalis are very different in appearance to the adult. The juveniles are black overall with yellow markings on the fins and a yellow bar behind the head. As the baby bluestripe grows, it begins developing the blue markings along the sides and on the head. The yellow bar and the distinct yellow fin margins gradually fade. The number and width of the blue lines on the side of the body vary, as does the pattern of blue markings on the face. Some amazing individuals have been collected off the coast of Vietnam that have a solid blue face rather than a network of blue scribbling on the head. This is not a large pomacanthid – it reaches a maximum length of around 25 cm (10 inches).

This lovely angelfish is most common on rocky reefs (consisting of large boulders and stones) and rubble slopes. It occurs at depths of 2 to at least 50 m (7 to 163 ft). While the depths occupied by the juveniles and adults overlap, my observations suggest that small juveniles are often more common at depths in excess of 15 m (49 ft.) (juveniles have been reported to depths of 30 m [98 ft.]). These youngsters can be found on rocky, patch reefs and often remain near a crevice in which to retreat if necessary. 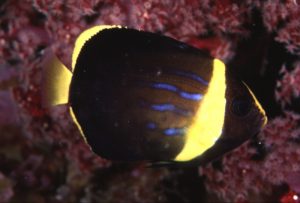 The juvenile bluestripe angel has a very different color pattern than the adult. Note the blue stripes are starting to develop in this young fish.

Sometimes, young and adult C. septentrionalis interact (adults are typically not aggressive toward juveniles). While juveniles never occur together, adults are found singly, in pairs and on rare occasions in trios. One pair of large adult fish I observed would swim up to several meters (up to 7 ft.) apart as they picked at algae-encrusted stones. They would occasionally reunite, which usually included some rushing and circling (i.e., one individual rushes at the other and rapidly swims around it). After this reuniting ceremony, they would resume foraging.

The bluestripe angelfish nips at hard substrate and sand (it concentrates most of its feeding effort on the former). Observations made in the field indicate that C. septentrionalis picks at macroalgae, sponges, black corals, and sea whips. In Miyake-jima, Japan, females are ripe with eggs in September and October, while juvenile fish are most common from September to December.

On rare occasions, this species and what is thought to be the orangefaced angelfish ( C. chrysocephalus ) have been observed swimming together. Courtship and spawning of C. septentrionalis has been observed in captivity. During courtship, the males will engage in lateral displays, where they erect all their fins in front of the female and sometimes lye down on their sides on the substrate. Like many other angels, males of this species engage in “soaring” during courtship. Spawning takes place just before or after the aquarium lights went out.

The bluestripe angel is a relatively durable angelfish that will readily acclimate to a well maintained aquarium. It is an active fish that will need to housed in a larger tank with plenty of shelter sites. All the Chaetodontoplus spp. can be shy when initially placed in the aquarium, but they usually become bolder once they fully acclimate. 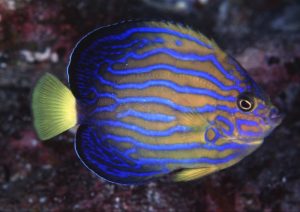 This is a fairly durable angelfish species that makes a wonderful display specimen. A small adult bluestripe is shown here.

Like other angelfishes, this species should be fed a varied diet in captivity that includes some vegetable matter. Frozen foods that contain Spirulina algae and some of the dried algae that is now readily available in aquarium stores make great dietary supplements. Chopped shrimp, clams, squid, fish and the frozen prepared mixes are good staple foods. Because C. septentrionalis feeds on encrusting invertebrates throughout the daylight hours, they are best fed three to five smaller portions each day (if there is natural fodder in the aquarium, like algae, you can feed them less often).

Unfortunately, like many of the species in the angelfish family, these fishes are susceptible to saltwater ich ( Cryptocaryon irritans ), velvet or coral fish disease ( Amyloodinium ocellatum ) and the viral infection Lymphocystis. Some members of this genus are reported to be sensitive to the build-up of nitrate in the aquarium and it has been reported that some may stop feeding, become listless and loss their color if levels rise to high (say, over 200 ppm). Because this fish requires frequent feeding, it is a good idea to employ a protein skimmer to prevent the build-up of dissolved organic materials. 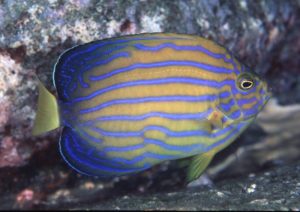 The bluestripe angelfish is fairly common off Taiwan and certain parts of Japan. Those coming into the trade are reported to be captive-raised individuals from Taiwan.

Adult bluestripes can become quite malevolent once they fully acclimate. They will pick on other angelfishes and have also been known to pester butterflyfishes and fish tankmates that have a similar shape or that nip at the substrate (i.e., potential food competitors). For this reason, I would add other fishes into the tank before I put in a subadult or adult bluestripe. I would suggest that you look at dottybacks, hawkfishes, some of the more durable wrasses, damselfishes, sandperches, blennies and gobies as potential C. septentrionalis tankmates. With the live rock, there will be plenty of places for a smaller damsel or goby to hide in if the angelfish goes on a tirade! If you get a smaller bluestripe, make sure you do not add it to a tank that contains one of the larger, more pugnacious dottybacks, hawkfishes or damselfishes. They may end-up inflicting damage to the smaller angelfish.

As with many of the larger pomacanthids, you are better off buying a larger juvenile or subadult, as very small juveniles and large adults tend to ship poorly and/or have a more difficult time acclimating to captive life. Although it can be kept it higher temps (up to 84 ºF), it will do better at cooler temperatures (62 to 76 ºF). I should point out that this species has spawned in at least one public aquarium. 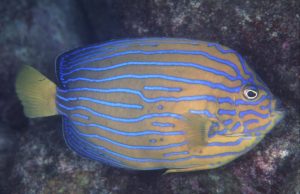 As this fish grows, it becomes proportionally more elongated. as seen here in a larger adult from Japan.

Although species and even individuals can vary to some degree, it is highly likely that any angelfish in the genus Chaetodontoplus is going to nip at and damage corals. There are definitely corals that these fishes are more likely to nip at and even feed on. For example, they tend to like the fleshy polyps of large-polyped stony corals (e.g., the open brain coral) and the soft corals in the genera Xenia and Anthelia. Some soft corals in the genera Cladiella, Lemnalia, Lobophytum, and Sinularia exude toxins that make them less palatable to generalized predators. These soft corals are less attractive targets to angelfishes (note: not all the soft coral species in these genera are unpalatable to fishes). It may also be possible to keep this species with SPS corals as they are less likely to pick on them. That said, there are no guarantees! These angelfish will pick at zoanthids, and may kill tridacnid clams.